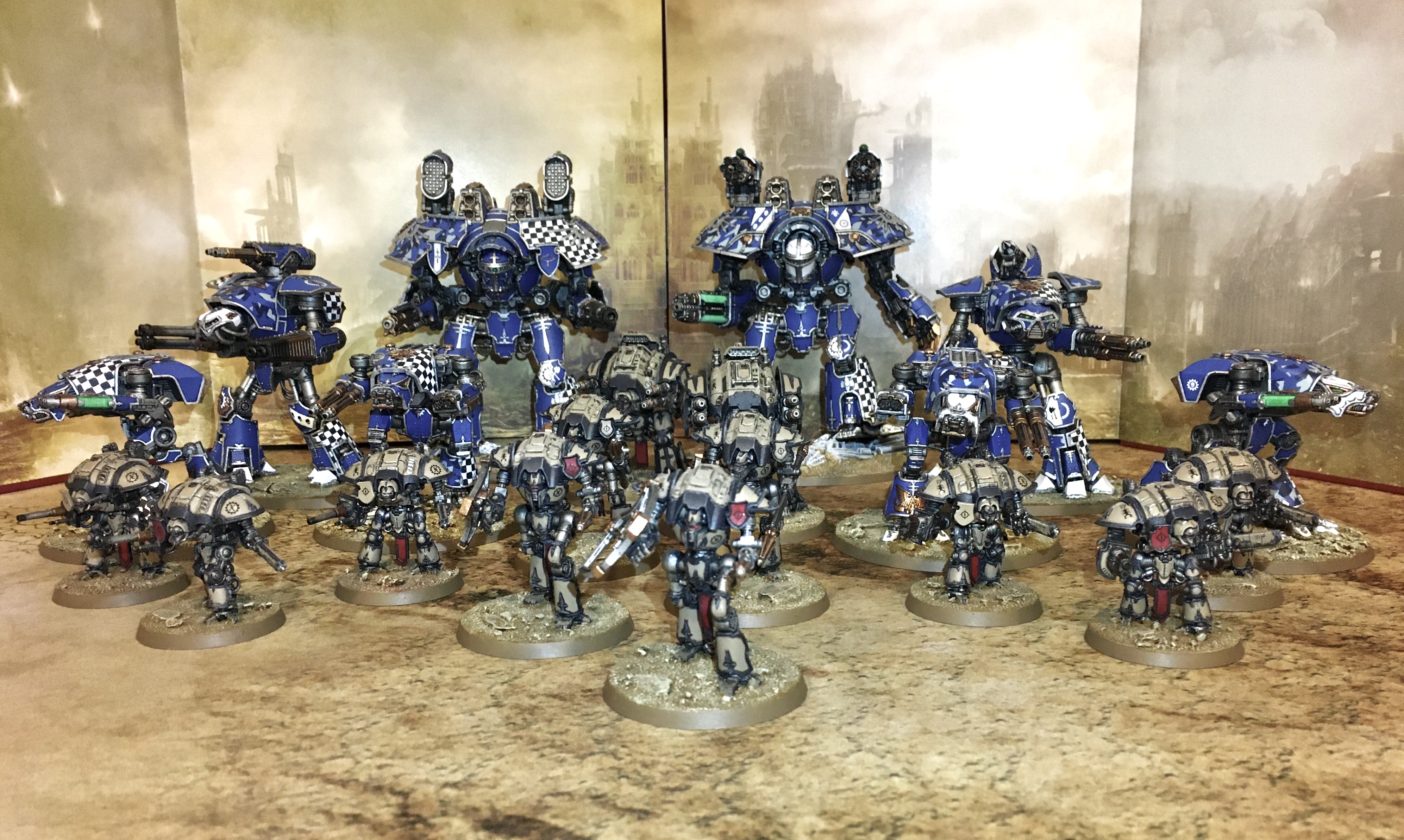 Yeah, way overdue for this.  I've completed a lot since my last hobby update in November, I just didn't finish everything I wanted to before I posted, so I kept putting it off.  Blame myself for being unnecessarily perfectionist about hobby goals.

Anyhow, in chronological order, here's what I've completed, and roughly when: 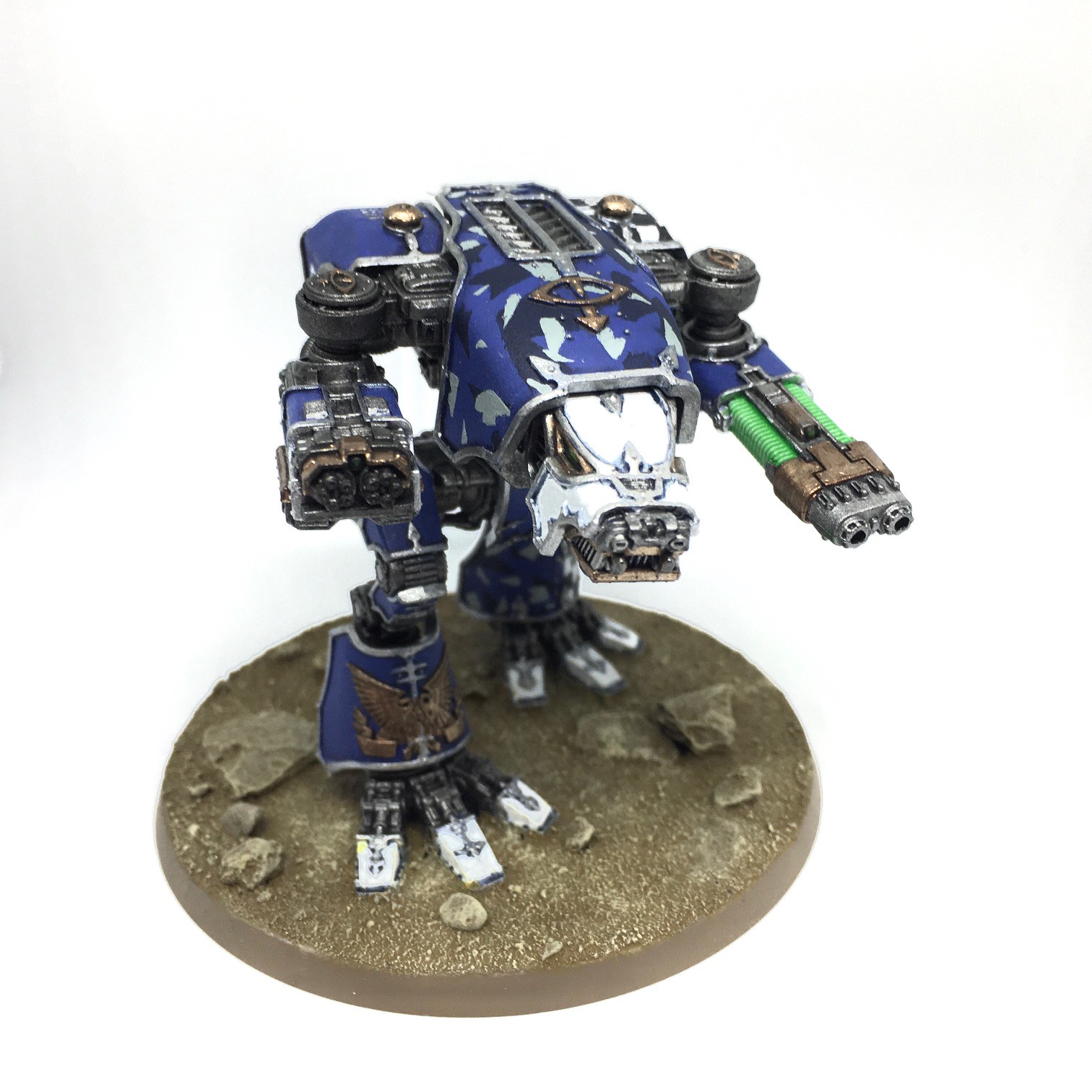 This guy was completed just in case I had to play a 1250 point game at PAX Unplugged - I could run a full Venator maniple and at least get 3 activations out of it (and believe me, Warhound packs live much longer than solos).  Probably should re-shade those toes a little; will do that when I hit Reaver #3 again (see below). 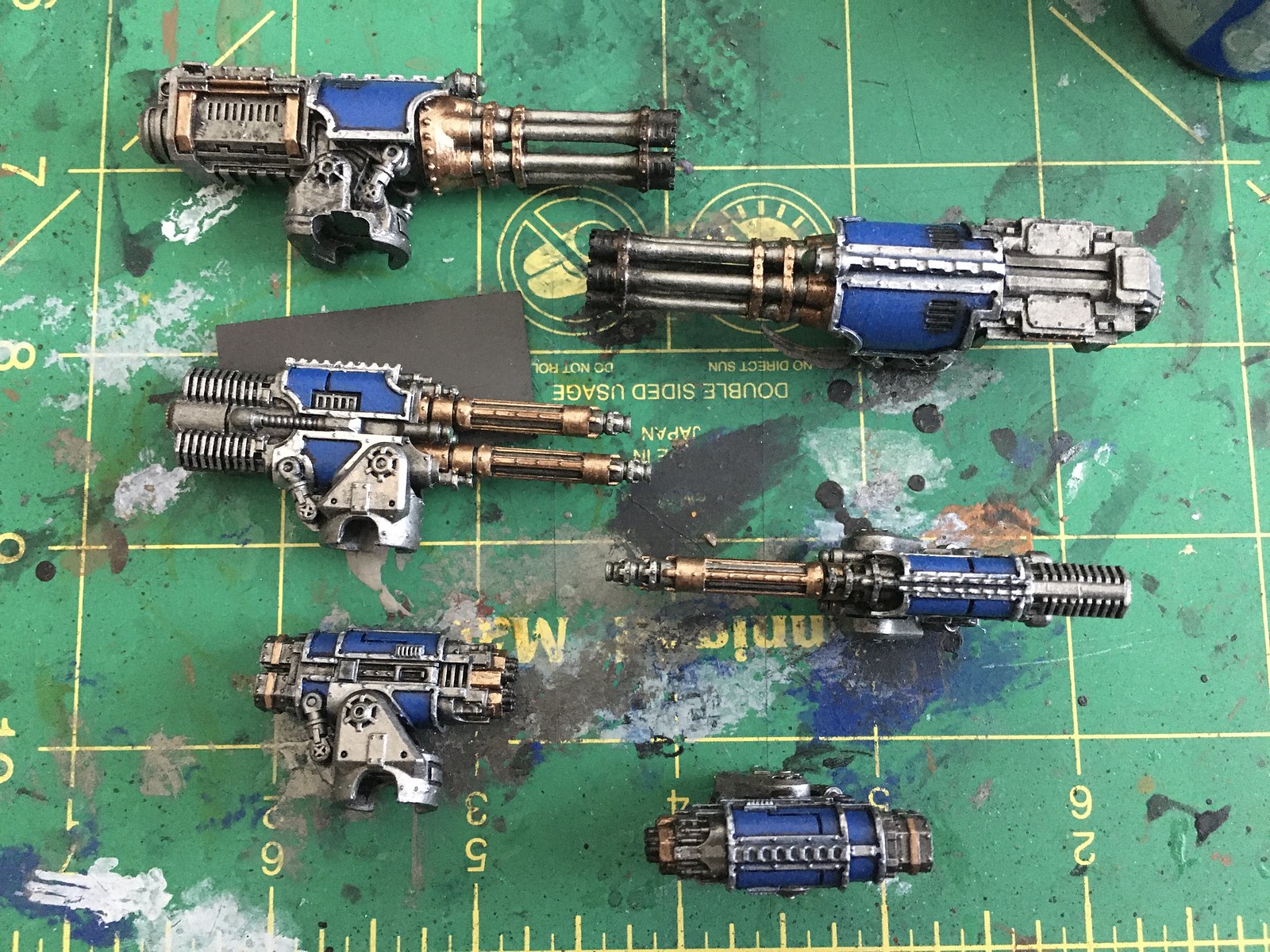 I knocked these guys out before Christmas, and the gatling blasters, at least, got their first game right around New Year's.  I know the world swears by gatling blasters for their brawler Warlords, but I think I might still be happier running either Apocalypse Launchers, or going to Chasmata Laser Blasters, when it comes to range vs. number of shots.  As for the Turbolasers, those might legitimately see the most play given their long range accuracy and my desire to get a Myrmidon maniple onto the table at some point in a competitive game. 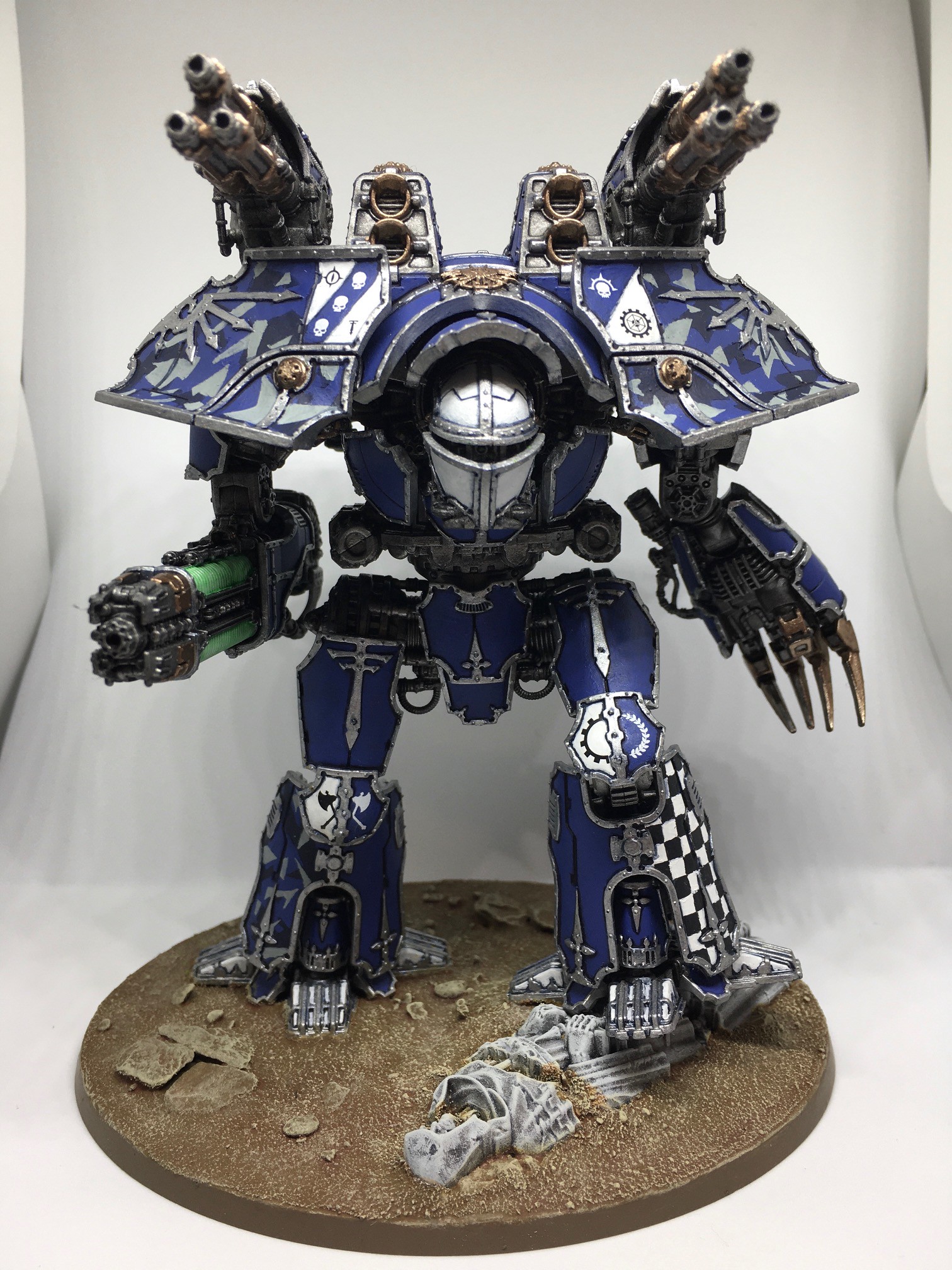 Oh I am very happy with this guy (the lightbox not so much, but the Titan yes).  When I finally get my nameplates going this will be Cataegis Irae/"Stormwrath," my overall battlegroup commander's engine.  The leg post did not come out as "Captain Morgan/Hero Pose" as I wanted it to - posing seems to be overall much more subtle than I expected on the Titans - but he's quite deliberately crushing a fallen statue of a Mechanicum worthy underfoot.

As with all of my other Titans, everyone's part of the same battlegroup (identified by the left leg split checkering and right leg split camo), but identifiable by Axiom maniples (either split carapace between checkering and camo, or a full camo carapace with a white cockpit).  It's a subtle distinction; curious how many folks will figure that out without reading this here.  The idea was that I could at least host intro games between the two Maniples when I'm done and still easily be able to tell which force is which in an internal Legio training wargame. 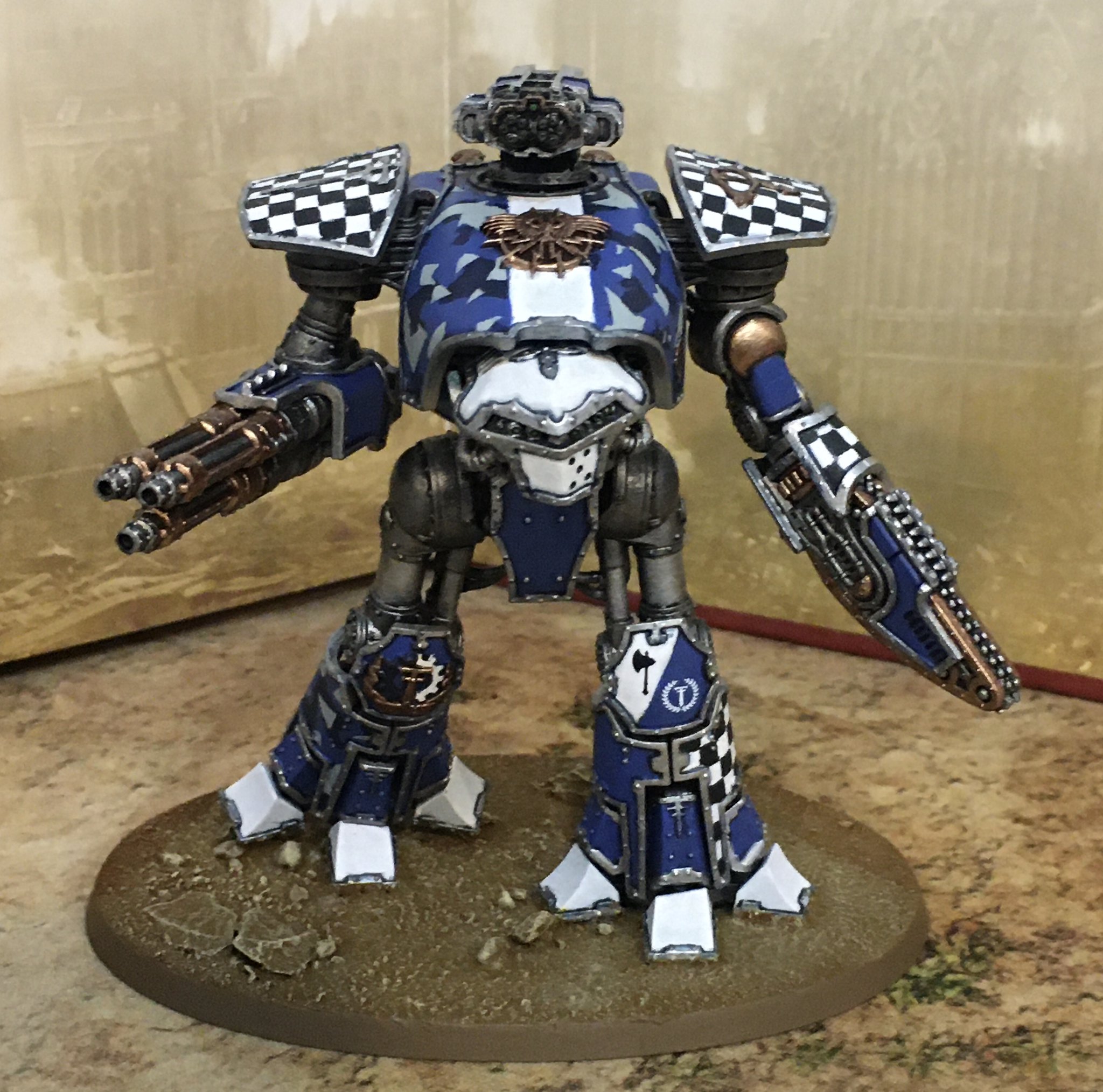 The newest of my action figures, this guy has a magnetized chainfist (in case I ever want to swap it to a power fist) in addition to my usual magnet treatment.  With four Reavers total planned, I figured I could build two dedicated gun platforms and two dedicated close combat platforms and still have full flexibility of force choice in most games.  By this guy I really think I'm getting the hang of the checkering, and I'm happy with how well my armor panel pin washes are going.  I've decided I need to touch up that central white stripe though.  It needs a dark edge and some shaded blending in toward the center, probably only about 1-2mm per side, but that'll help it pop and feel less flat (also an opportunity to straighten the lines a tiny bit more).  Otherwise, he's tabletop ready.

This guy missed the photo up top by about 24 hours, unfortunately, but he'll make it into the "final" Titan force shot in another couple of weeks.

Well, I have one more Reaver in the queue (right-handed power fist), and a Warbringer kit on the way, as well as a whole bunch of Knight weapons primed.  After that, there's another sprue of Questoris I want to assemble, a pair of Acastus I want to convert into Asterius-pattern (w. conversion beamers), and I want to see if I can't get myself conversion bits for a pair of Cerastus Acherons.  If I do that, I'll have enough Knights for 1250-1500 points worth of a Household force, and pretty much everything I'd want to paint or play for Tempestus, so I'll probably consider starting a (smaller) loyalist force, or a maniple or two of Legio Krytos (Honestly, 4 Warlords + 1 Reaver (Myrmidon) , backed up by 2 Warbringers + 3 Reavers (Ruptura) sounds way too much fun).  I'll probably get a couple of natrix shock lances when they come out for my Warhounds, but I'm probably passing on ursus claws for a bit; forced shutdowns are good, but ursus claws can only do so much against a hostile Warlord.

I really need to step back from titans for a bit and focus on terrain.  Those wooden tiles have been sitting untouched for way too long, and I have a *lot* of buildings to construct and paint.  That might really be my next big project after the upcoming Reaver, Warbringer, and Questoris weapons.

I also have an active Necromunda campaign going on right now, so I need to get those guys painted - expect to see more of them in the near future.  Also coming soon, another Iron Warriors playtest battle report needs writing finally.