Yeah, ok, so I missed my Titan update.  So here's a bit of a catch-up.  Warlord #3 and Reaver #5 are finished, woo  On top of that, I've built - and now need to prime (please, NYC in June, could we stop raining on the weekends for five minutes?) - a wargaming city table scaled appropriately for Epic, and am currently juggling expanding that alongside painting more Knights for Malinax. 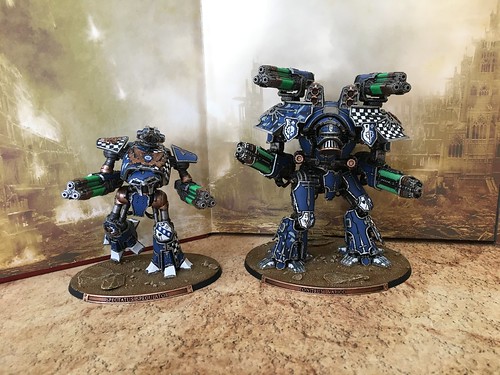 Tonitrum Varico (Rolling Thunder) and Spectatus Speculator (Vigilant Watchman) join their sister engines on the battlefield, along with a whole bunch of third party plasma weapons I picked up because plasma is fun :)
I'm pretty happy with the running pose on Spectatus; it's meant to represent a "Power to Locomotors!" reactor push or even "Full Stride" order, and I wanted you to feel like it's a heavy machine powering forward.  I also wanted to put some sway in it, and emphasize the stomping, predatory nature of the engine.  Reavers aren't small; they just look it next to Warlords. 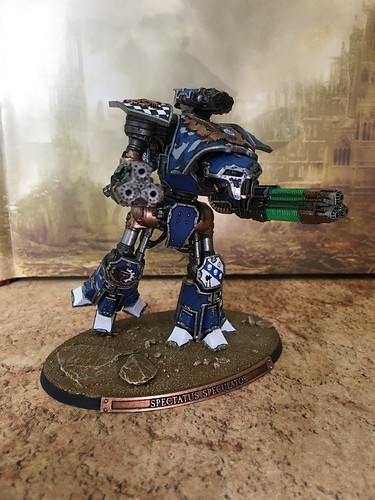 As for the Warlord, he was always meant to be more of a gunslinger, so I built him in the midst of a torso twist, turning to get a bead on someone. 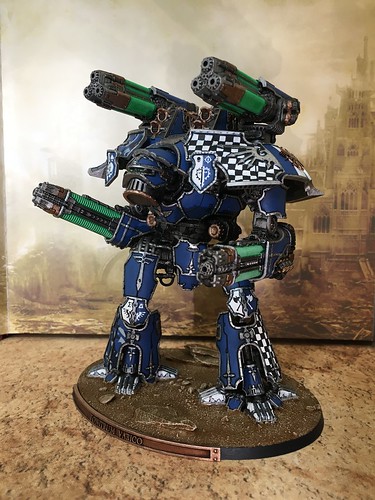 I think I OD'd a little on the heraldry shields, but I've been pushing myself to keep each titan unique, and the complexity has only been increasing.  I finished up the Lucius-pattern Warlord heads I had while I was at it; that gets me enough variety to, well, use whatever I feel like whenever I feel like it. 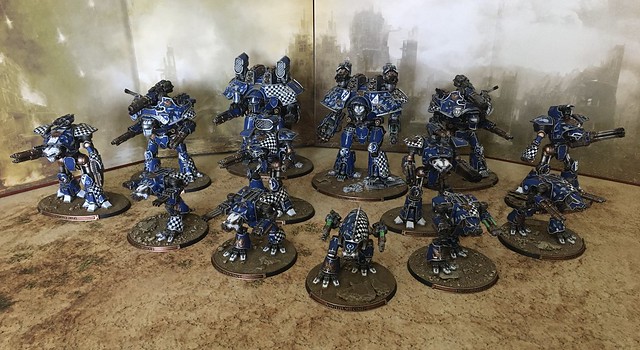 Here's everybody to-date:  three Warlords, two Warbringers, five Reavers, and five Warhounds.  That gives me enough to field any maniple in full, other than the Extergimus.  So what's left?  One Warlord (Extergimus), and a Warbringer, eventually.  I want to finish the table, and some Knights first before I go back to Tempestus.
They'll probably be getting some weathering eventually, too, I just haven't quite settled on how, and how much.  Do I want to add rust? paint chipping? dust collection?  I'm thinking dust around the legs, at the very least, but not sure how much wear & tear I want to put on the torso and upper carapaces.  I also think I need to revisit older titans and work on enhancing some of my pin washing and edge highlighting, especially on some of the later engine designs with armor panel gaps.
City Board 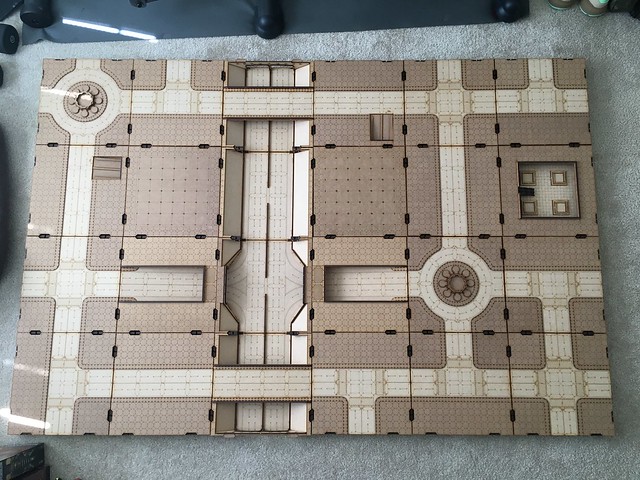 Heck yeah.  I'll let that speak for itself for a hot minute.

So yeah, Craig Birks, Uncertain Scenery, makes an "8/10mm" modular city board.  Each tile is 12x12x2" and is scale-agnostic enough to work just fine from a Grimdark 6mm all the way up through Drop Zone Commander.  The key element is the 2" deep tile design - they don't pack nearly as tightly as a smaller tile system, but the added height lets you go down as well as up - adding in recessed highways, shopping mall courtyards, parking garage entrances, etc.  It also lets you go up, adding terraced hills, ramps, and bridges between elevated regions.

I still have a lot left to build, almost enough for two full 4x6' boards - just to have a wide range of options for a single 4x6' :D - when I'm done, but I like the potential it offers.  I've already broken the boards out for one game, and I'm hoping to get it fully painted & distressed by Historicon this fall (along with buildings to fill the city blocks). 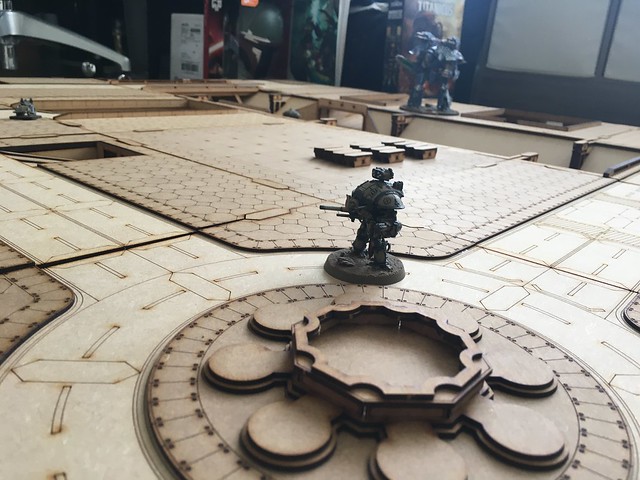 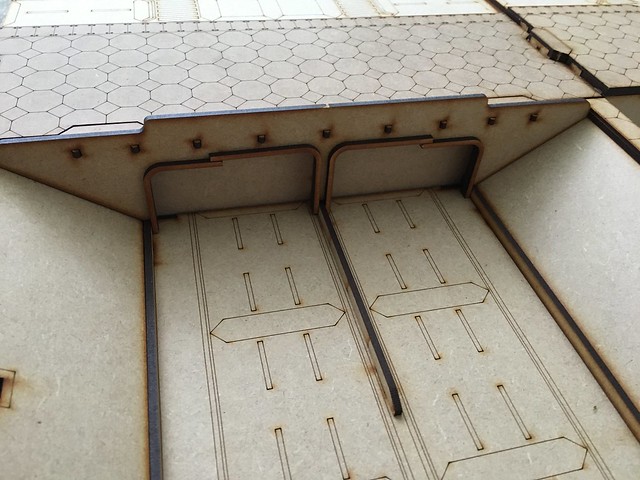 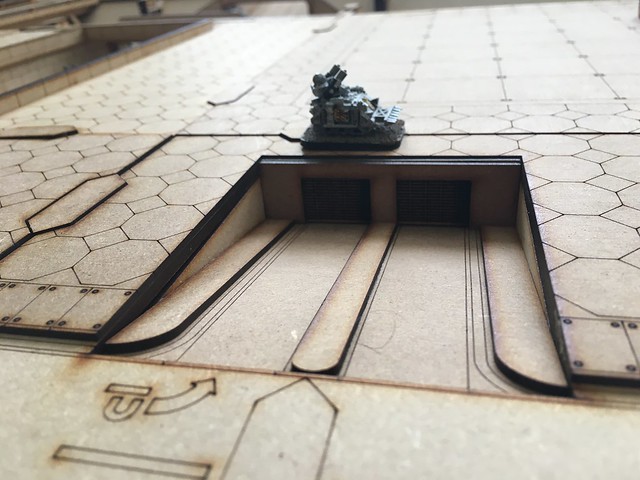 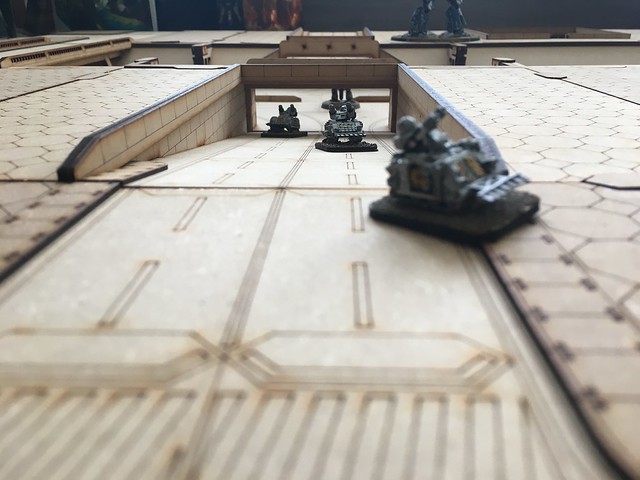 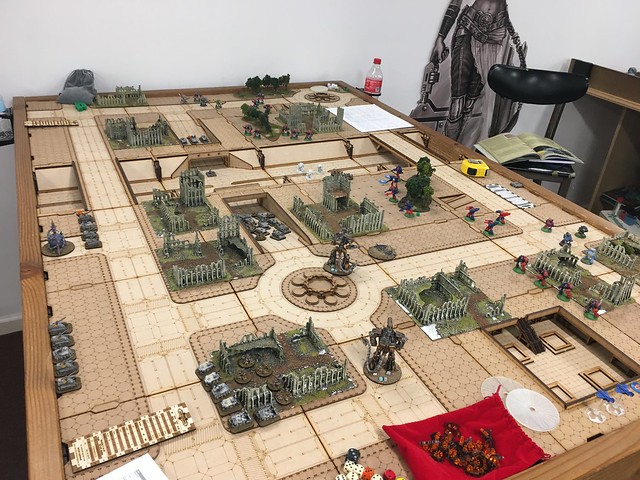 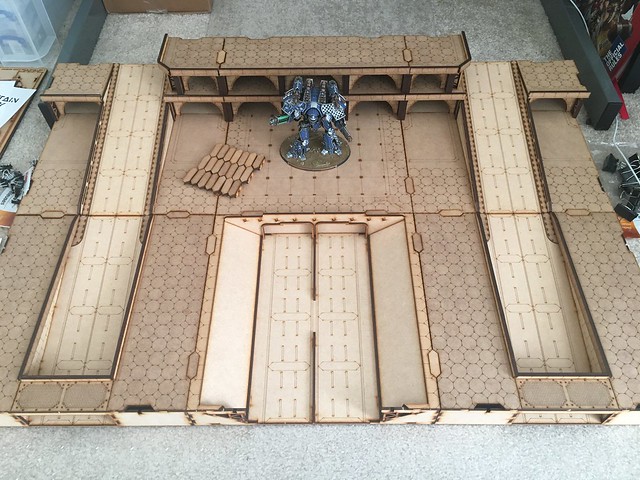 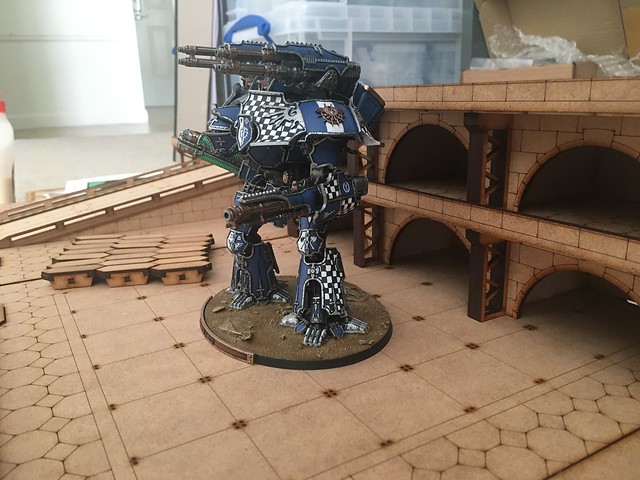 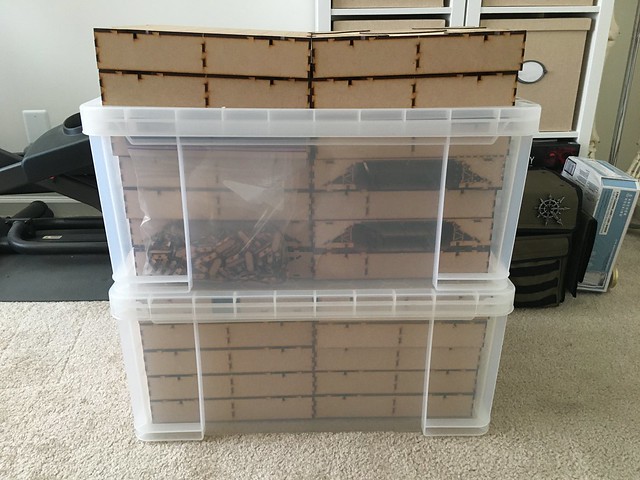 +++ Pict capture:  Unidentified Legio Tempestus battlegroup marches on Nyrcon City, circa 002.M31 +++ Well, obviously I haven't gotten a whole lot of gaming in over the past few weeks.  After coming back from a short vacation and a business trip right before the world shut down... well yeah.  Passed on Cold Wars, and generally hunkered down working from home and painting when I could. So along the way I finally got myself back onto the Bolter & Chainsword forums, and committed to their Titans of the Heresy II panting challenge.  With that, I committed myself to finishing two Reavers (one of which I shared in the last blog post) and a Warbringer.  Well, fast-forward a few weeks of feverish work e-mails and being busier than ever, here's the remaining fruits of my labor: Nearly 800 points of carnage, I now have two CQB Reavers and the first of two walking artillery platforms ready to go ;) The Warbringer was a ridiculous amount of work, even compared to a W