Well, obviously I haven't gotten a whole lot of gaming in over the past few weeks.  After coming back from a short vacation and a business trip right before the world shut down... well yeah.  Passed on Cold Wars, and generally hunkered down working from home and painting when I could.

So along the way I finally got myself back onto the Bolter & Chainsword forums, and committed to their Titans of the Heresy II panting challenge.  With that, I committed myself to finishing two Reavers (one of which I shared in the last blog post) and a Warbringer.  Well, fast-forward a few weeks of feverish work e-mails and being busier than ever, here's the remaining fruits of my labor: 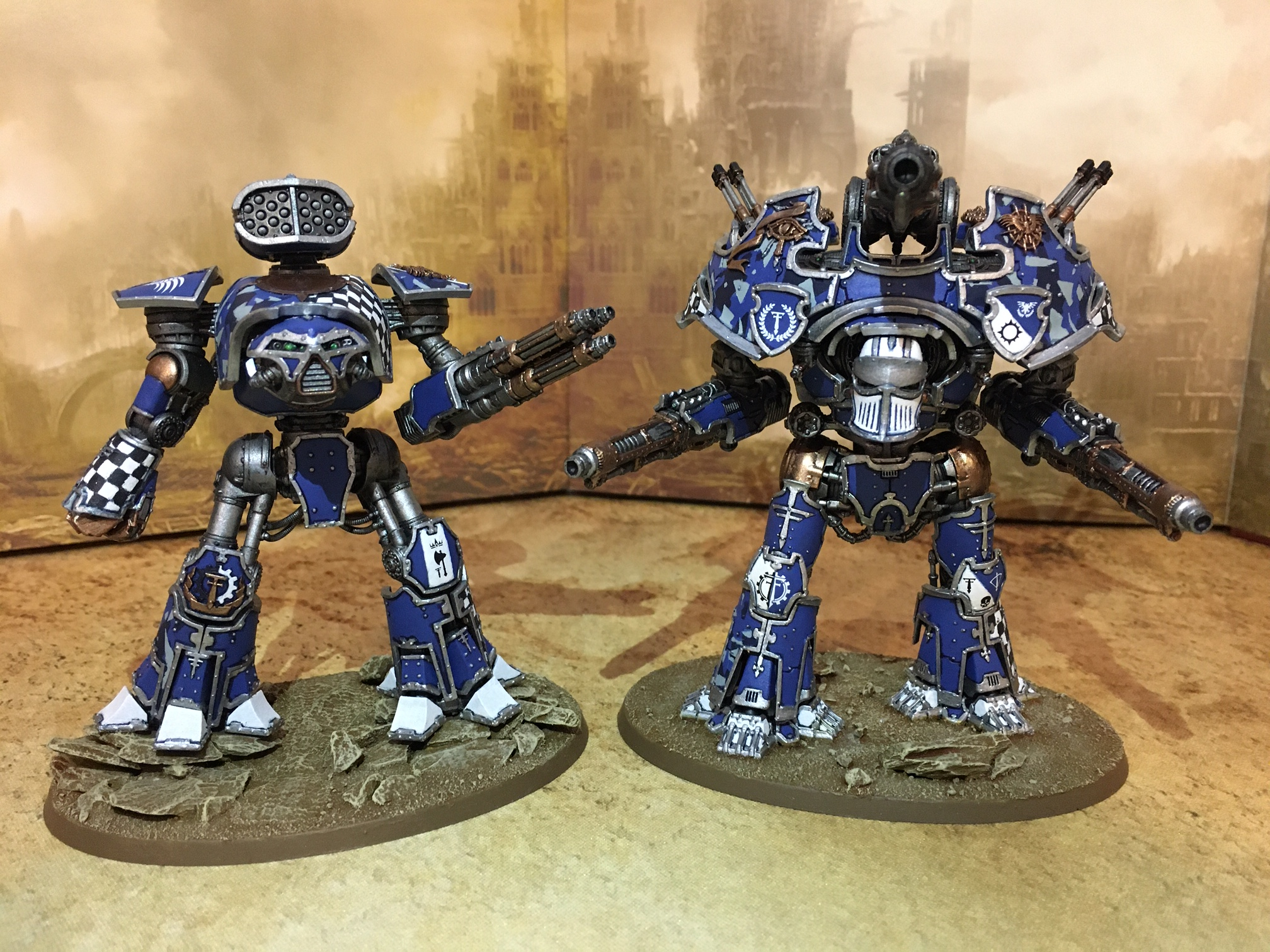 Nearly 800 points of carnage, I now have two CQB Reavers and the first of two walking artillery platforms ready to go ;)

The Warbringer was a ridiculous amount of work, even compared to a Warlord, with all of the fiddly armor plates they loaded onto that thing.  You can really tell what was CAD-designed from the ground up vs. adapted from a hand-sculpted 28mm model (Reaver, Warhound).  I still have two more volcano cannon, a gatling blaster, a laser blaster, and a melta to paint for my mid-height battle titans, plus another volcano cannon and laser blaster coming with the next Warbringer... so this arsenal isn't finished by a long shot yet.

Seriously considering going back to all of my Reavers and repainting their hip actuator caps bronze alongside the Warbringer, but I haven't quite committed to it yet.  Also, as it gets warmer this Spring, I plan on seal-coating everything I've painted so far, adding some scrub to the bases, and working on adding some desert dust weathering to the Titans as well. Less certain about rain streaking, but that has more to do with keeping them thematically consistent with their environment. 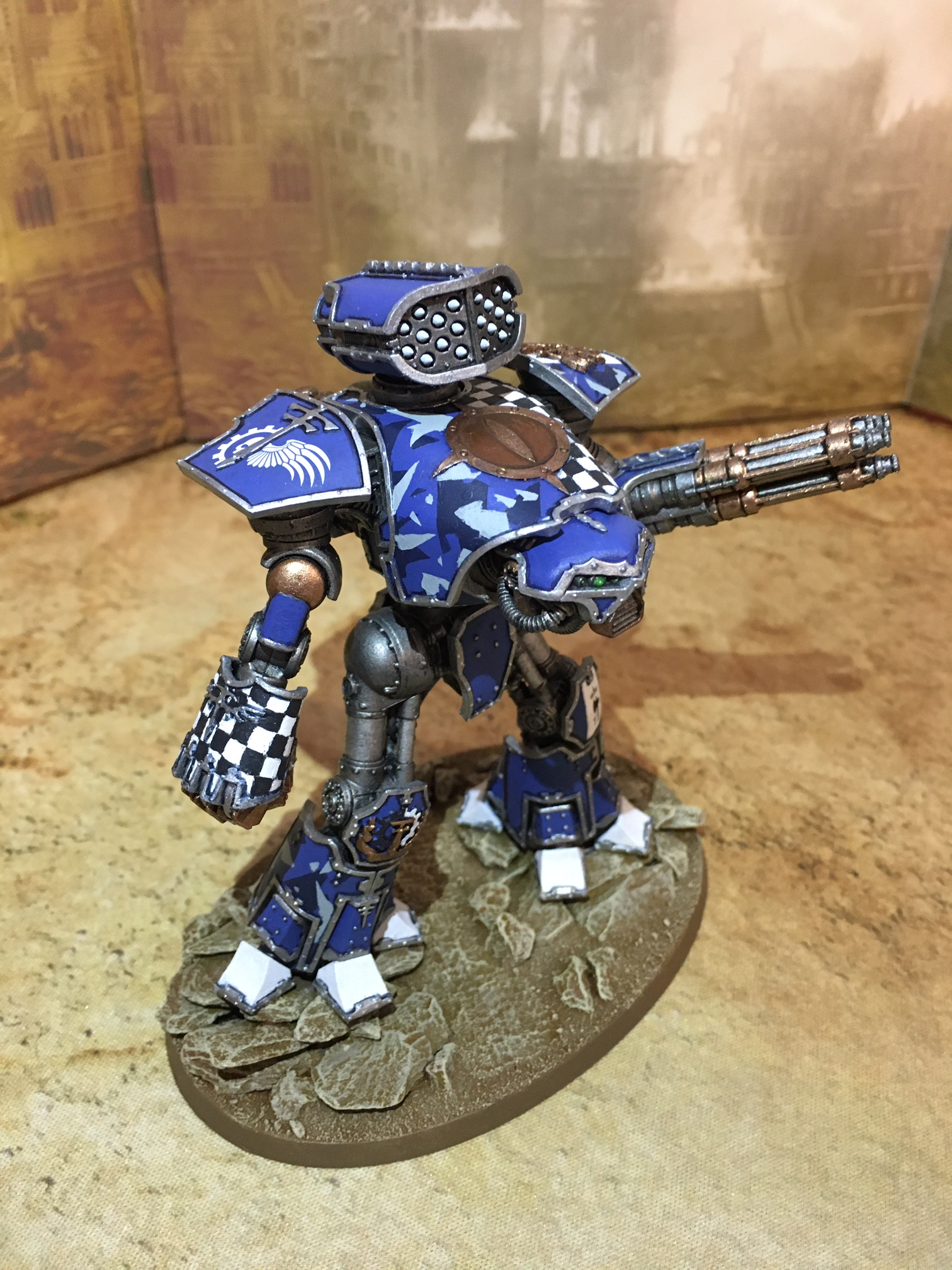 With the Reaver's heraldry and battle honors I really wanted to tell a story.  Specifically, the lack of kill markings and relatively simplistic personal heraldry, combined with the massive, showy allegiance markings... between the right shoulder split between Mars & Legio Tempestus, and that massive Eye of Horus on the carapace, is the princeps in charge of this engine overcompensating a little?  Getting a little too showy in his declarations of allegiance to perhaps cover some closely-held misgivings? 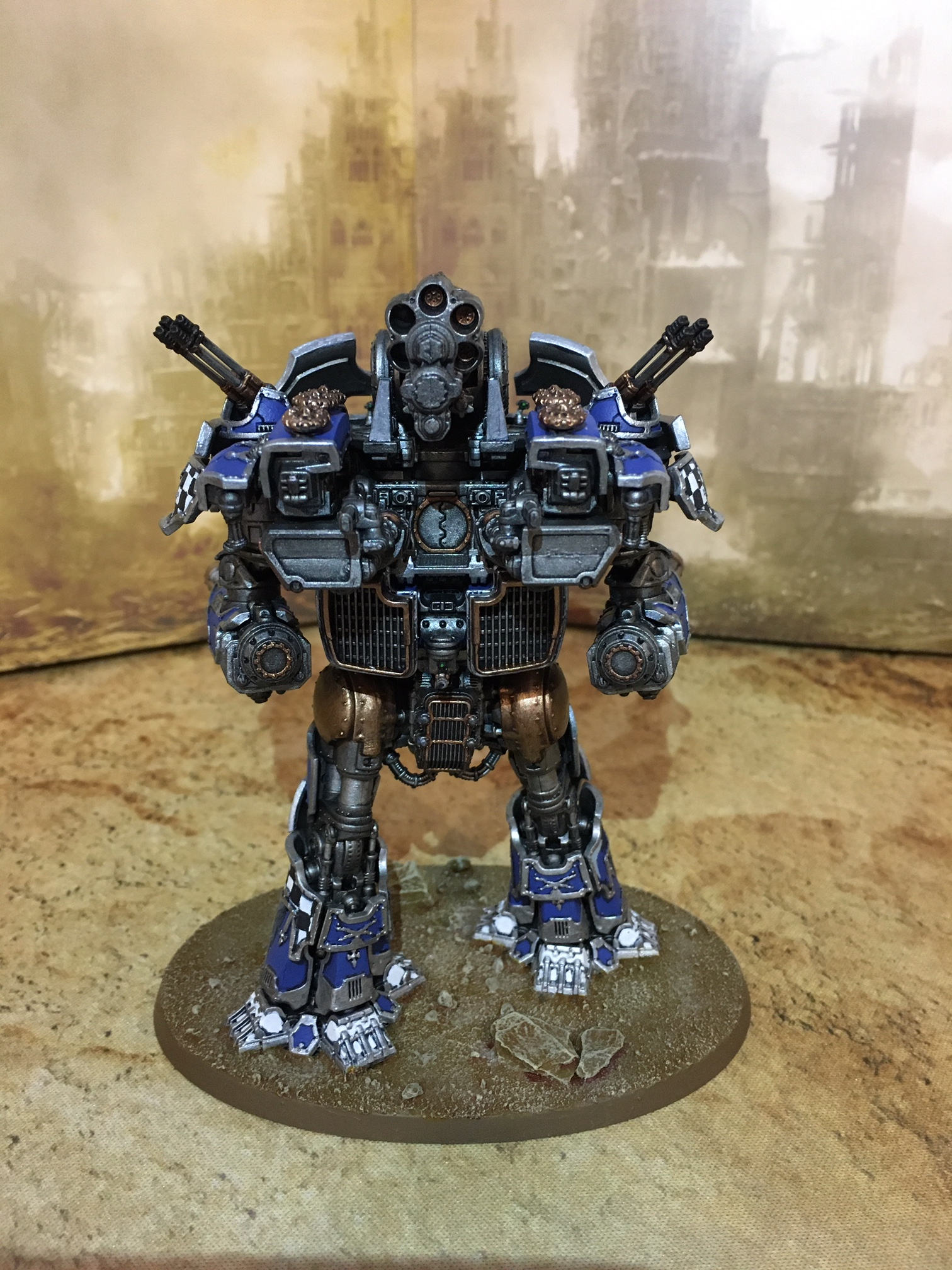 This guy was a beast.  The flack turrets are magnetized, the ammo panniers are magnetized, and the Quake cannon's turret has enough contact friction from the wash and paint to hold itself stiffly in place (gun is also magnetized so I can set my elevation).  I wanted a bracing fire pose, although the one thing I really screwed up was mounting the power transfers backwards.  So I trimmed the cables and modeled them retracted.  You probably wouldn't even notice unless I'd pointed it out, anyway. 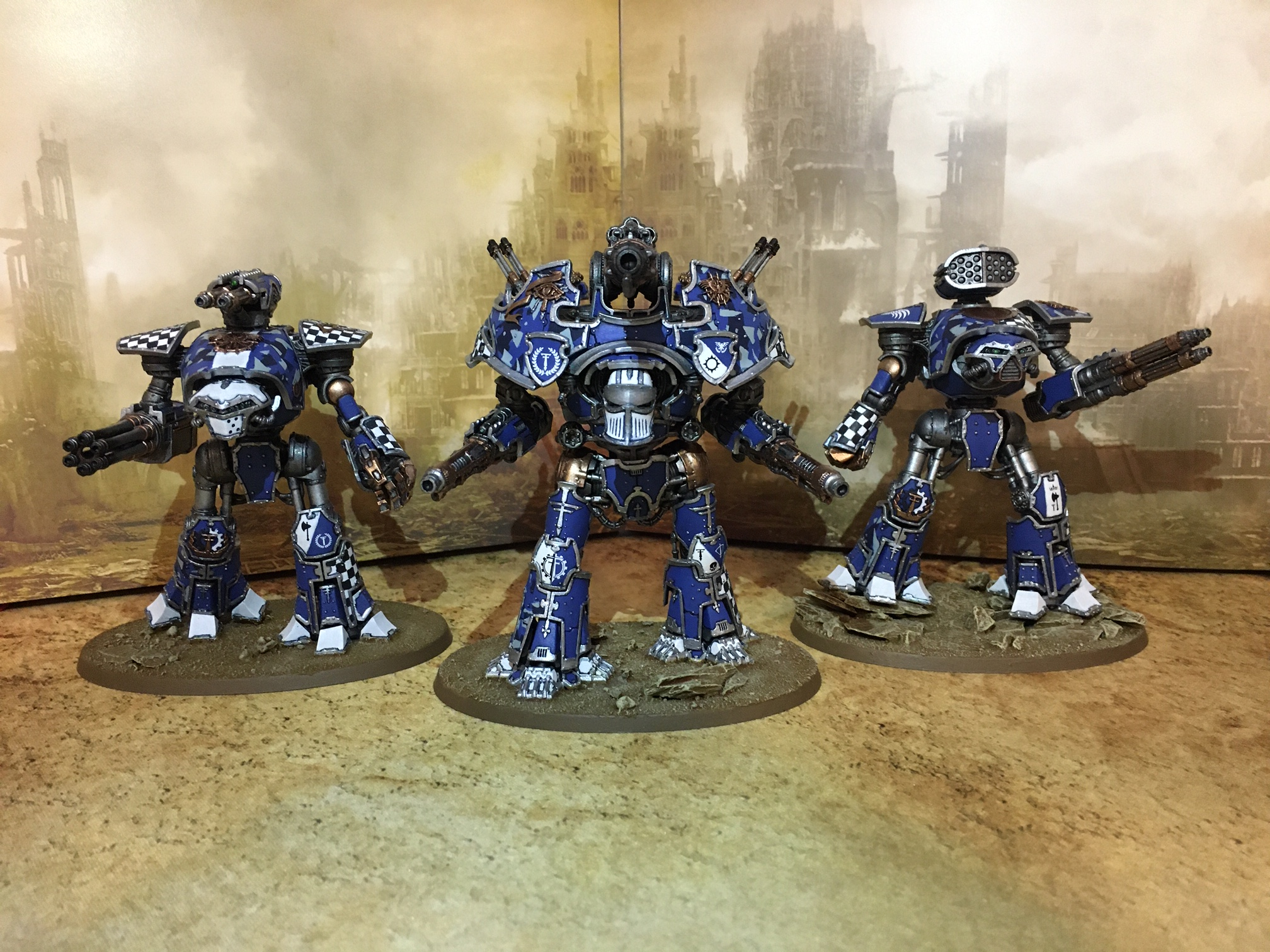 So here's the full B&C pledge all aligned.  Note the combat weapons, and then go check that initial blog post banner - I've magnetized both Reavers at the wrist to swap between power and chainfists ;)

So what's next?  Well, I have enough titans now to run an Arcus, most of a Lupercal (4/5), and most of a Corsair (4/5).  I'd like to get a second Warbringer, fifth Reaver, third Warlord going, and then of course there's this little guy... 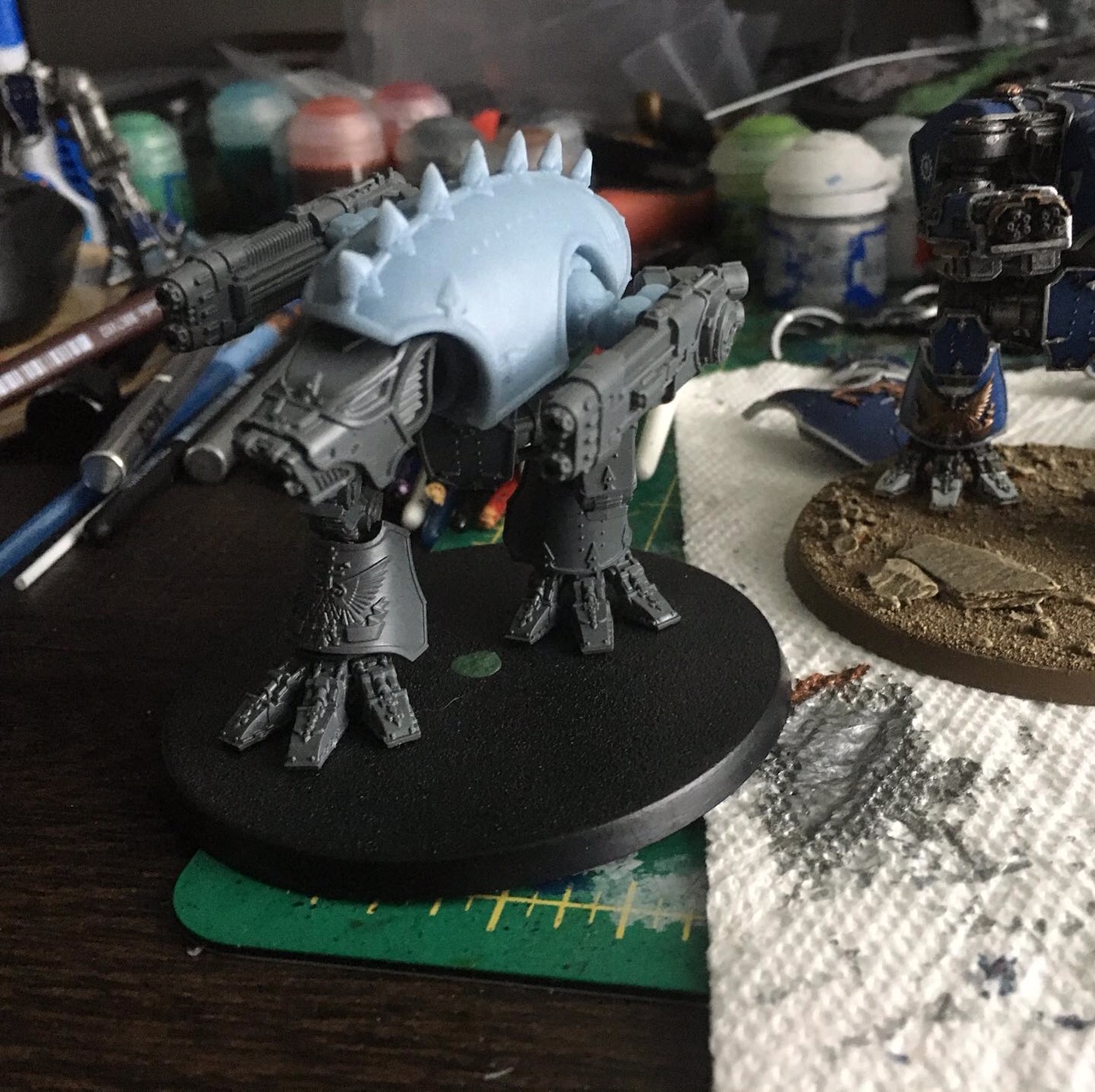 That'll let me run a full force for any one single Maniple in the game currently, as well as have a custom Warhound for my Legio's "named character."  I may not be able to play games safely outside of Tabletop Simulator, but at least I can paint.  More to come! :)
30K Adeptus Titanicus Chaos Ongoing Projects Tempestus Titan Titanicus