April 07, 2015
Disclaimer:  First off, this is an unusual thing for me, and may well be a one-off.  If I choose to review a product it will not be as a result of any incentive offered by the creator, but because I genuinely like the product and wanted to share my appreciation for it.

Right, with that out of the way, let me introduce you to the subject of this blog post: 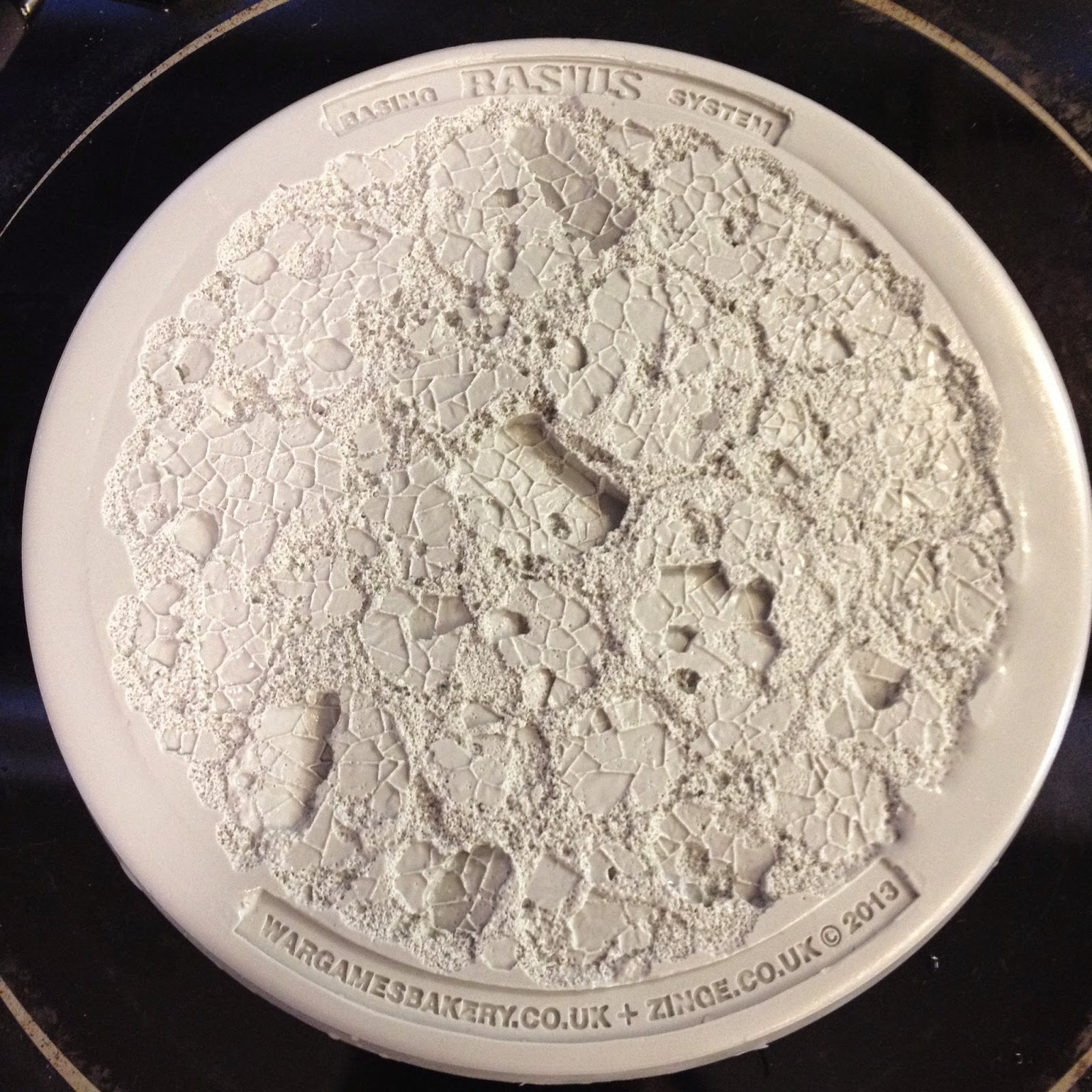 So I picked this up about a year back from a third-party distributor who I suspect had bought in heavily to Wargames Bakery's original Kickstarter, or had taken their overstock once the Kickstarter was over to sell off.  (Edit:  I'm an idiot.  It's right there on the base.  Zinge and Wargames Bakery partnered to launched Basius 1.  Amazing what you can discover if you use your eyes, no?)  I grabbed it at a time when I was trying to figure out how I would base my 6mm scale Titans for Epic:  Armageddon.  I felt like bigger war engines on 40-60mm bases needed a little more than just painted sand or flock on their bases, and I'd stumbled across these in the aforementioned web store, having read briefly about them on a gaming blog several months prior and passing over them then.

I liked this one because it didn't have any clear size references in the design, and as such I could hopefully use it across scales and ranges (when you're buying and importing your stuff from the UK to the US, multi-purposing is one of the few ways to keep costs down).  I also grabbed a pair of starship corridor pads that I'll be using for my AvP Miniatures Game whenever it gets of 20th Century Fox's Approval Hell, but that's something for a future blog post.

Anyhow, that should give you the background; onto the characteristics...

Material/Durability:
Although it's not easily visible in the picture above, the manufacturer used a hard, glossy resin to cast the basing template.  Having survived two moves and at least one fall from a three-foot height since I initially bought them with no scratching or chipping, I can say that these are remarkably durable relative to my expectations.

Using the Product:
The press molds are meant for use with two-part epoxy putty ("green stuff") or even oven-baked modelling clay.  As additional tools for use in the crafting process, I picked up the following: 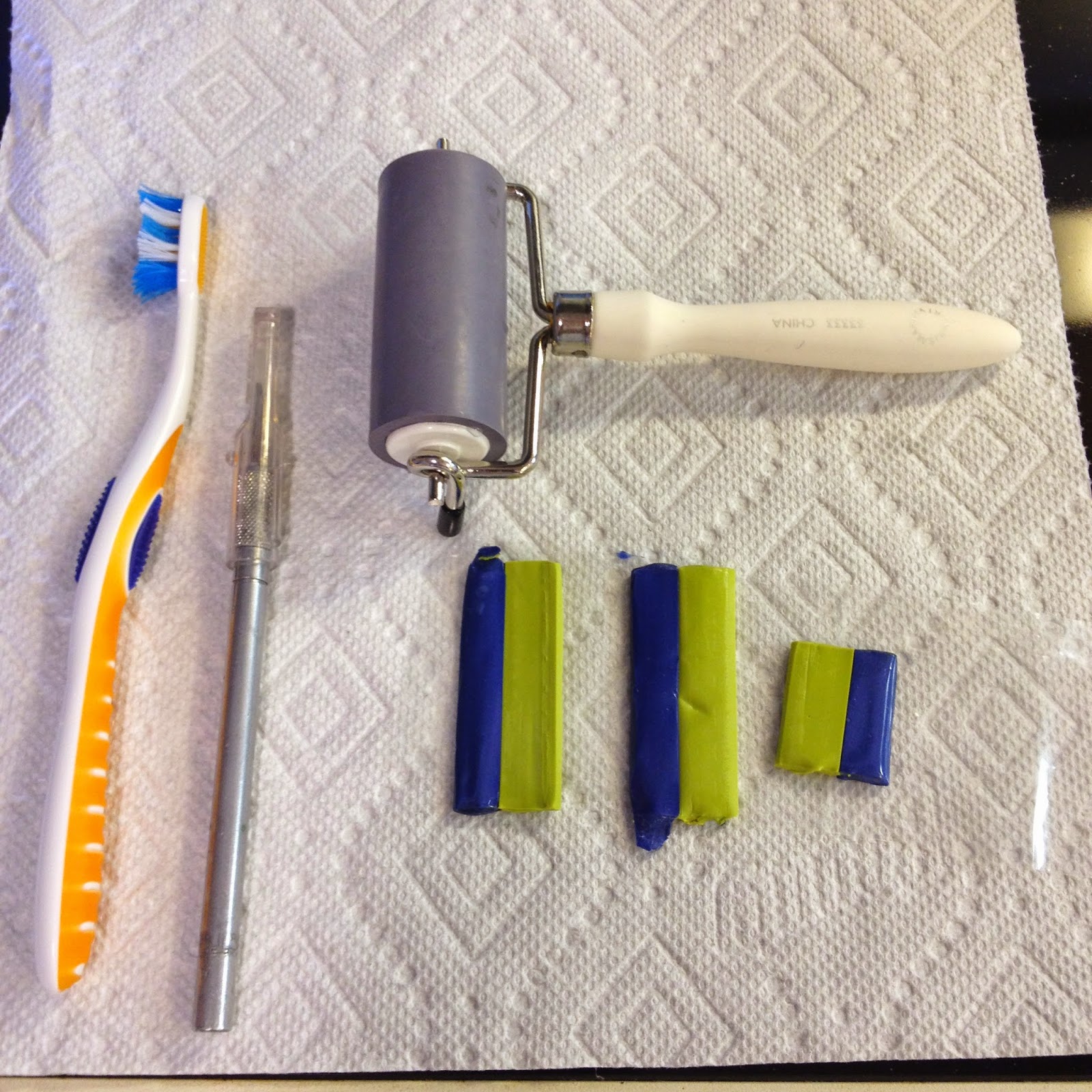 The toothbrush is there to help with scrubbing soap into the mold to clean it up without damaging the surfaces, I used the scalpel in lieu of a toothpick to remove left-behind modelling putty (NOT advisable; although I did not damage the mold, it's likely a disaster in the making), and the roller I picked up to make sure I get a smooth, even press with a consistent amount of material.  Yes, I know it's a Martha Stewart product; it was what I could find (don't judge me).  Not pictured is my choice of mold release compounds.  rather than dusting the mold, I used a water-based personal lubricant. This did an excellent job, once liberally brushed onto the stamping area, and washed off easily without leaving behind a residue.  I also tend to use it on my sculpting tools when manipulating putty, as it dries slower, cleans off easily, and makes for a smoother more consistent surface when required in figure sculpting (picked up that one when I made a few one-off truescale marines a few years back).

Ultimately, making the impression was easy.  I started out by manually pressing a ball of putty onto the mold, flattening it by hand and then using the roller to help spread it out further and even things out.  After that, it was simply a matter of grasping one edge and gently pulling the putty free.

The putty came out with only a minimal amount of material left behind on the mold, typically in the tallest "debris piles" - the sand-textured lumpy areas, but that was easy to remove afterwards with the tip of my knife.  As for cleanup, a quick scrub-over with soap and water with the toothbrush removed any residue from my mold release agent, and a pat-down with a paper towel and some drying time was all that was required.  Total time spent on cleanup was maybe five minutes.

Results:
I'll let the results speak for themselves and give you a look at what I got off the mold: 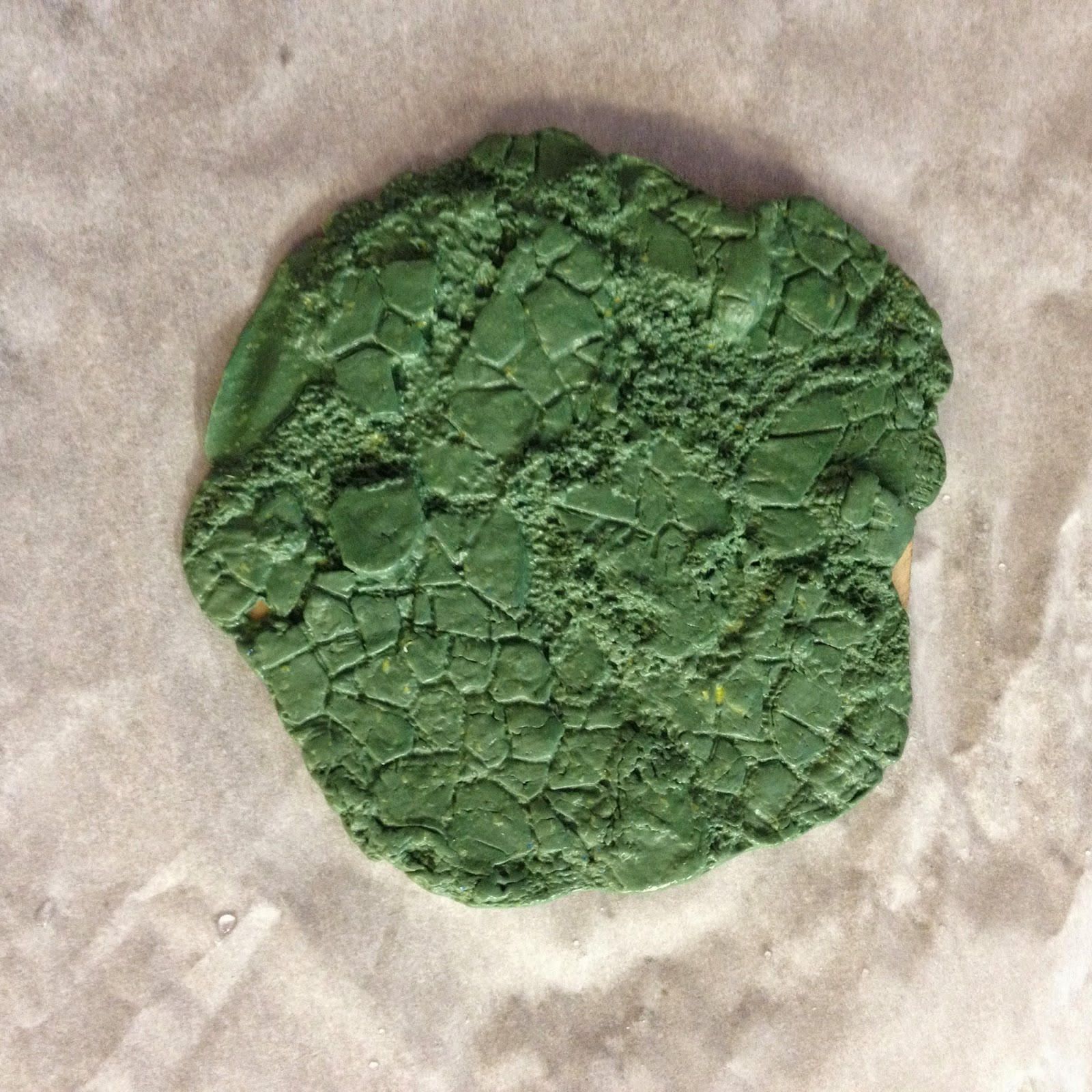 For a first attempt, this was far better than I had honestly expected.  There's a little bit of a gap on the far right where I didn't fully anticipate the surface area required to cover a 60mm base, and a tiny hole on the left side where the putty tore and left behind a remnant on the mold, but that's it.  I reshaped that one raised rock in the top right corner (roughly 1 o'clock on the dial) to have a flatter top and profile, but that was it.

To finish the base, I also made an impression in one corner of a Titan's foot before the putty dried, figuring that I wanted to give an impression of motion to the finished model, and figured that something of this size would leave a bit of an impact in the ground it moved over.

Here's a picture of the cleaned-up base, and another one with the Titan's foot, and a 6mm infantryman for reference purposes: 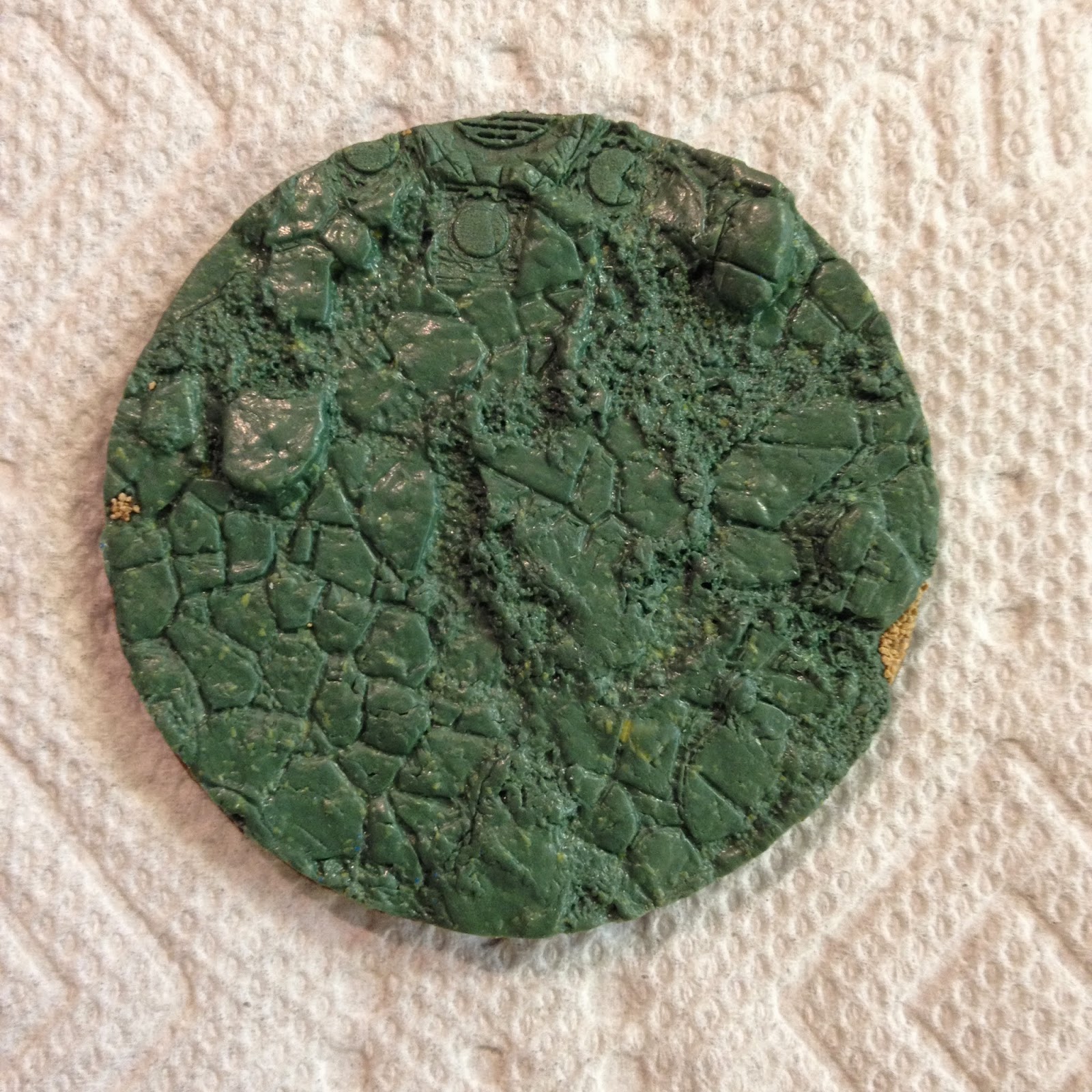 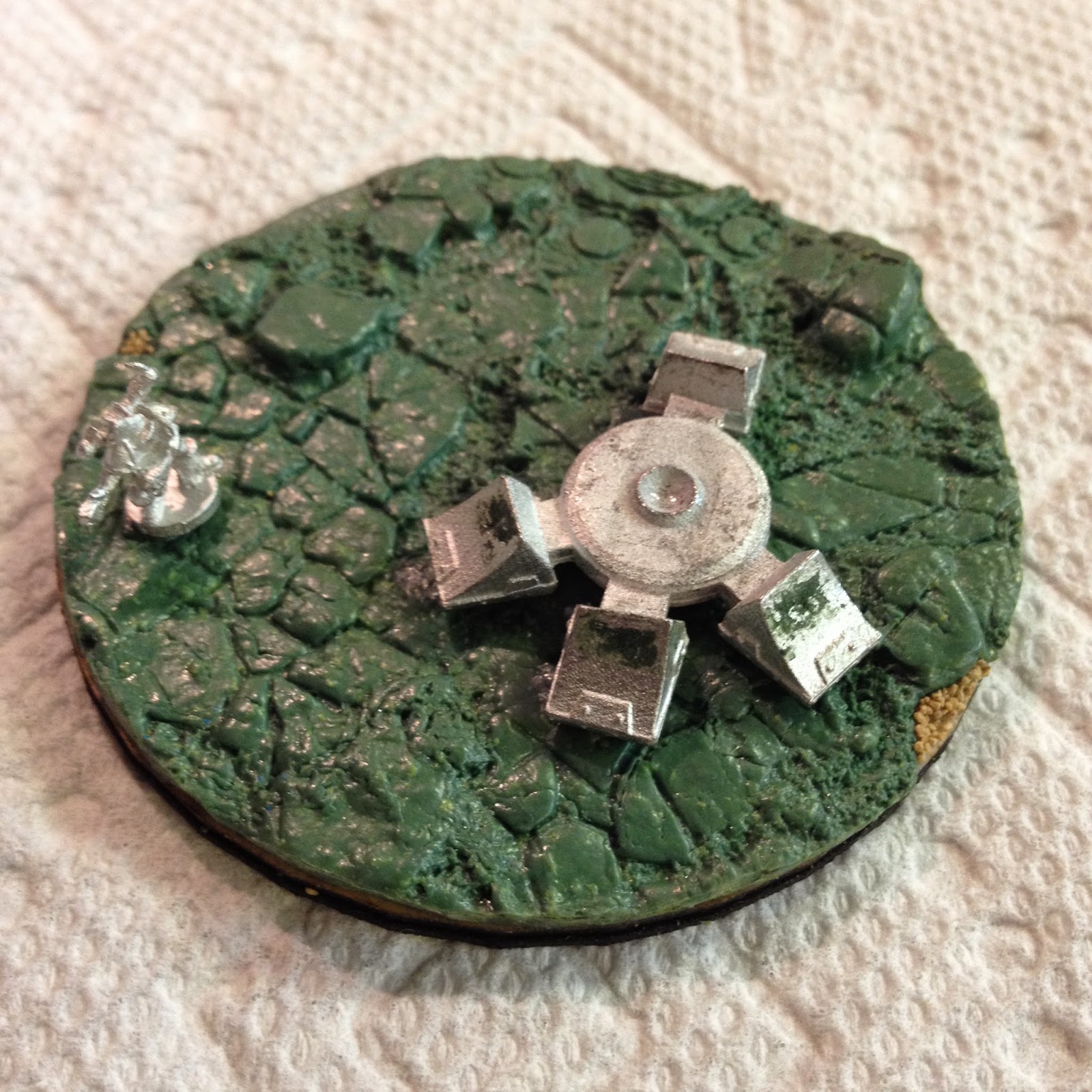 I'm extremely happy with the results; the ruined landscape works well for a shattered war-world or a stretch of badlands, and the details aren't out of proportion with the 6mm model.  I won't be basing an entire army of infantry this way, but that's more a function of how 6mm infantry are based than it is a judgment on the quality of the stamping pads.

I do have one last step left in that I need to get around to painting the trimmed edges with some Liquid Green Stuff to help smooth out the finished product, but I'll worry about that when I get closer to finishing the sculpting on the Chaos Ravager Titan I plan on mounting on the base (future blog post in the works).

Overall Impressions:
The pad was totally worth it.  Setup, stamping, and cleanup were all quick and easy, and the few minor imperfections I had with the resulting impression were easily cleaned up.  Once painted, they won't even be noticeable.

I know there are alternatives out there, press-stamps, and I think I might have seen a roller somewhere, but for the money I spent, the size of the stamping surface (6 inches in diameter) means I will be able to get a lot of mileage out of this within an army without duplicating surface details, can easily adapt my impressions for varying base sizes, and use the results (with this template at least) in a number of scales.

I was expecting a hassle:  tearing when de-molding the impression, lots of detail lost stuck to the mold, and messy cleanup, but the whole process was remarkably easy.

After doing some research, the original Basius Kickstarter funded in September 2013, with Basius 2 (double-sided square pads) funding in October 2014, but I wouldn't be surprised to see another round of these in the near future, and apparently Basius 2 will be available from Wargames Bakery's site sometime from May 2015 onward.  I'd say it's worth the investment, if my results are anything to go by.