I Come From the Darkness of the Pit!

The past couple of years have involved a heck of a lot of travel (pretty sure I was travelling for work 30/52 weeks last year) and a couple of moves.  As things settle, I'm carving out some space for a painting table and getting back into things.

My Iron Warriors are nearly done, all ~10,000 points of them, barring a repaint of the bases, seal coat, and maybe some tufts.  The big win for this past winter was getting the other half of my Raptors formation painted and based, as well as enough tactical stands to allow me to switch seamlessly between Iron Warriors and Black Legion (BL companies are 8x "tactical" chaos marine stands, and IW companies are 6x "tactical" and 2x havoc).

On the painting desk, currently, I have a pair of Feral Titans (Chaos Warhounds), as well as the final flame patches for my Ravager Titan (Chaos Reaver).  I opted for Legio Suturvora from Forge World's Horus Heresy rulebooks (they show up in the Calth volume).

I got pretty close to finishing this guy before I had to switch over to focusing on packing for the latest move, so mostly I need to wet blend some highlights onto the armor, and finish adding flame patches everywhere, especially the legs. 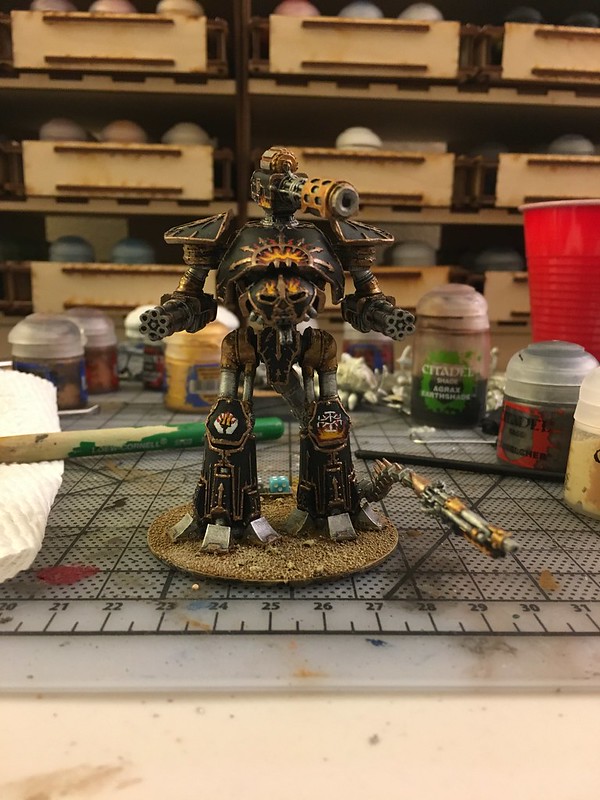 Two more Warhounds are primed, and I'm looking at converting up a siege-optimized Warlord as well, just because.

Beyond that, I still have to get around to painting:
Although frankly, once I get past the Defilers, most of this is pretty much a vanity project.

Next on tap, I've committed to (A) helping playtest the E:A Skitarii list and (B) develop the experimental E:A Skitarii Cataphractii list, so I'll be painting a lot of Adeptus Mechanicus.

Although the "archetype" list is Gryphonne IV, I'm opting to paint my Skitarii as hailing from Metalica.  Mostly settled on Metalica because I love the look of the Legio Metalica titan legion heraldry, especially with the polished metal skulls for titan cockpits, and the Skitarii's dirty white heraldry should work well for weathering purposes, and look good on the tabletop.

With a big audit coming up in mid July my painting time will be somewhat limited, but I'm hoping to get the Feral titans finished, and get past the Decimators on the painting list by July.  Drybrushed iron isn't that hard to paint ;)
AMTL Chaos E:A Epic Epic: Armageddon Ongoing Projects Restarted Suturvora Titan