November 26, 2018
Lots on the workbench, but end of year work tasks and holiday travel interfered with a planned update a week or so ago.

I took Suturvora to Fall In! in Lancaster, PA on 11/10, and came in third out of eight at the tournament, running 2-1 (winning two games 2-0, losing one 0-2 after trying to go to points) overall.

AMTL is a fun list, but you're totally going to get out-activated (that one loss was against Sisters of Battle, who brought 13(!) activations in a 3,000 point list), and you need to wipe out. not just break, whatever you're shooting at.

At any rate, I did get an army shot, including the Skitarii support (AMTL guns, no tails). 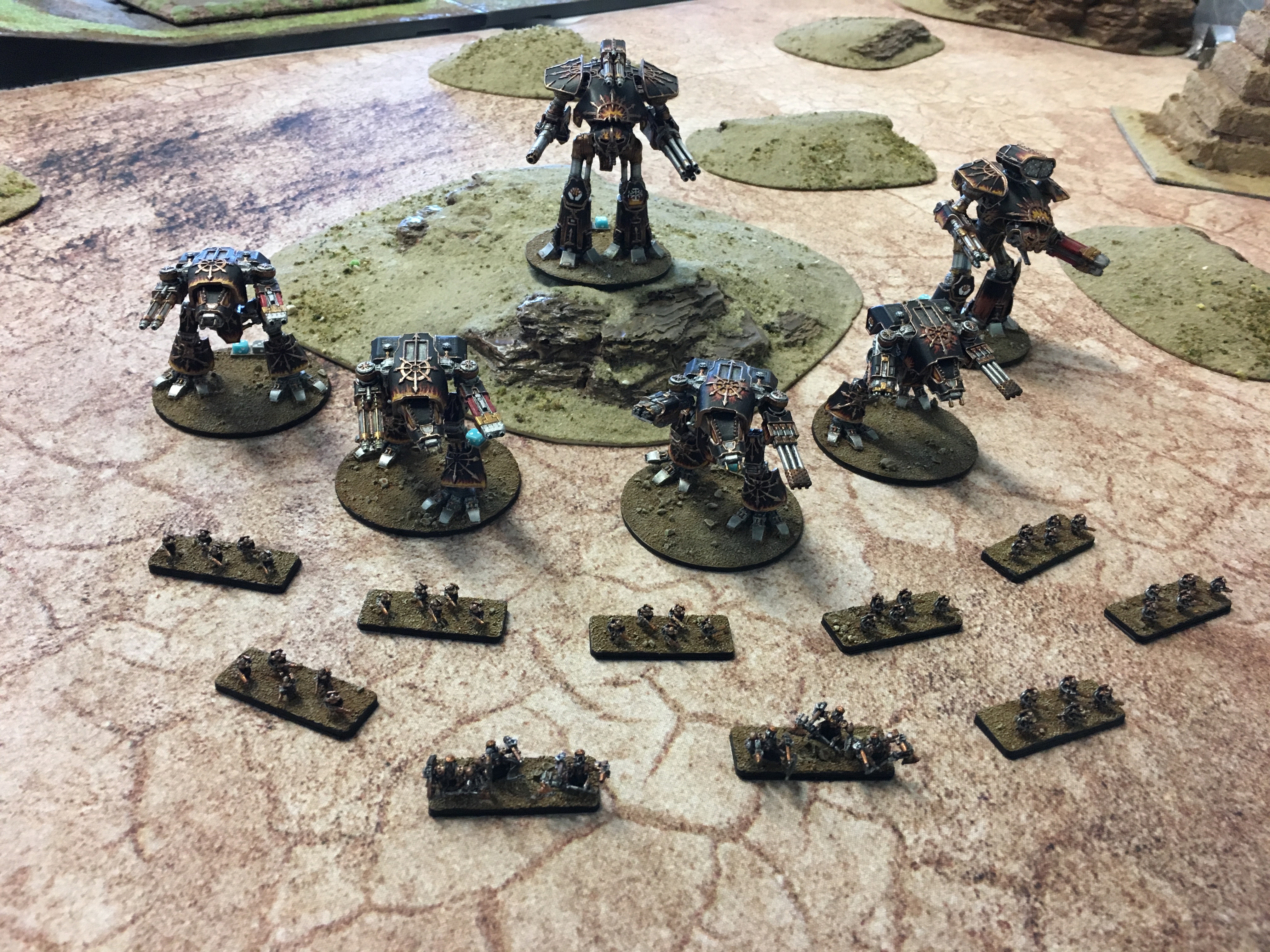 I'll follow up a little later with another post containing some close-ups of the second Reaver in "Ravager" configuration, as well as the other two Warhounds.  I have one last Warhound coming, another demi-century of Skitarii, along with 1-2 Warlords and a dedicated Banelord.  At some point I'm going to want some appropriately Chaos-y Thunderbolt analogs, but for now I'm just using uncorrupted T-bolts from my generic Imperial Navy pool to provide air support.

There's some talk in the wargaming group about proposing some AMTL revisions for playtest, including replacing Forge Knights with Paladin/Errant formations from the Knights list, and possibly changing the stats on the Crusaders so they're not so useless.  I'm also in touch with Vaaish about ways to possibly incorporate the Warbringer that Forgeworld just revealed, but we want to see what the 30K/40K rules look like first, and what weapon loadouts FW might tease, before we start rolling that into the default AMTL list.

Winter hobby projects will include a few more weapon options for my AMTL Reavers, 1-2 Chaos Warlords, a Van Saar gang for Necromunda, a True Atronians warband for Shieldbash, and possibly Jaarl marines for Shieldbash as well.  Now that I've put it in writing, let's see how much I manage to accomplish by April ;)
AMTL Chaos Epic Epic: Armageddon Fall In! HMGS Skitarii Suturvora Titan