January 31, 2019
Yeah, so, work kept me busy through November and early December, followed by about 2 weeks' worth of constant travel for the holidays... followed by a dive back into the job ramping back up in January with notification of audit results.  All I'm going to say about that there, other than noting that painting progress might slow down a little over the next few months.

BUT.  That doesn't mean I didn't get anything painted over the past two months or so!  On the contrary; I managed to build and prime my Van Saar gang for Necromunda, and I have 3 Warlord Titans in partial assembly for Epic: Armageddon (conversions to add chaos details ongoing).

Even with that in the background, I managed to knock out a handful of little projects for existing armies.  I've been wanting to update my objective markers for my Chaos armies for a little while (my warp breach just feels a little weedy next to my titans, now.  I've had a vanity project kicking around for a bit as well - building out an Engineering platoon for my Iron Warriors with a pair of bridge layers and recovery vehicles - plus I still had two Rhinos that needed painting for the IWs.  Finally, I wanted to bulk out my weapons options for Suturvora's Reavers, adding a second plasma cannon, volcano cannon, and laser blaster, as well as a third gatling blaster, and a pair of quake cannon.  Yep.

Still on the bench for work, going into February, I have:

After that, I have a few more projects I want to knock out:


So realistically, given the work required for the Warlords (long story, but I have some custom weapon conversions planned), that's realistically going to be my build list for 2019 and most of 2020 at this point.

Ok, that wound up being more of a wall of text than I'd planned!

Onto the photos, then ;)

First up, I've always loved those photos the major defense contractors will take of a fighter jet, and all of its ordinance and possible payloads laid out in front of it.  Consequently, here's my Suturvora Reavers, suited up for Chaos lists and with all of their potential AMTL arsenal laid out before them! 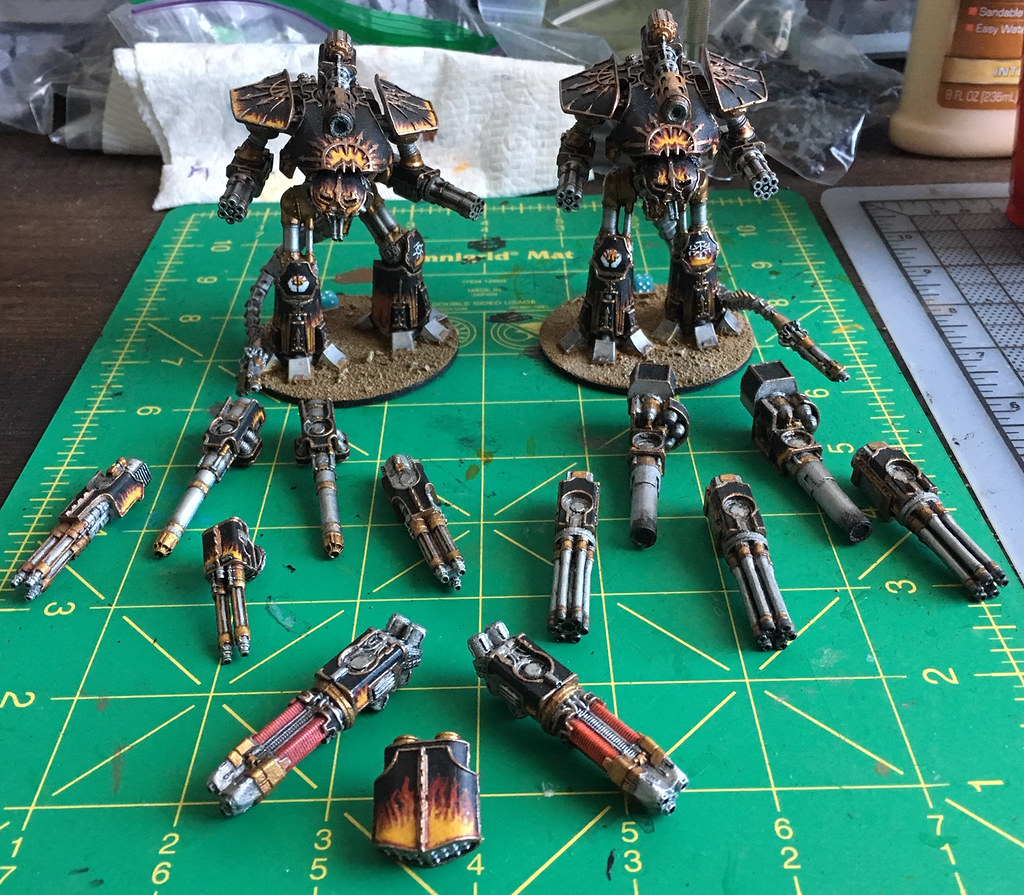 Dear servants of the False God; come get some!

Next up, Iron Warriors.  So, this army is mostly done...to a point.  The army list still isn't approved for NetE:A (which is a crying shame), and the force I've built is mostly geared toward the list that's up for approval, but at this point I can probably call this pretty close to done (barring elements listed above).  I finished two Chaos Rhinos (not pictured) and a pair of Dreadclaws that have been hanging over me for a while (unnecessary, unless I want to take & mechanize ALL of my infantry), so now I can go all "Steel Rain" and drop entire formations of Dreadnoughts on my opponents! 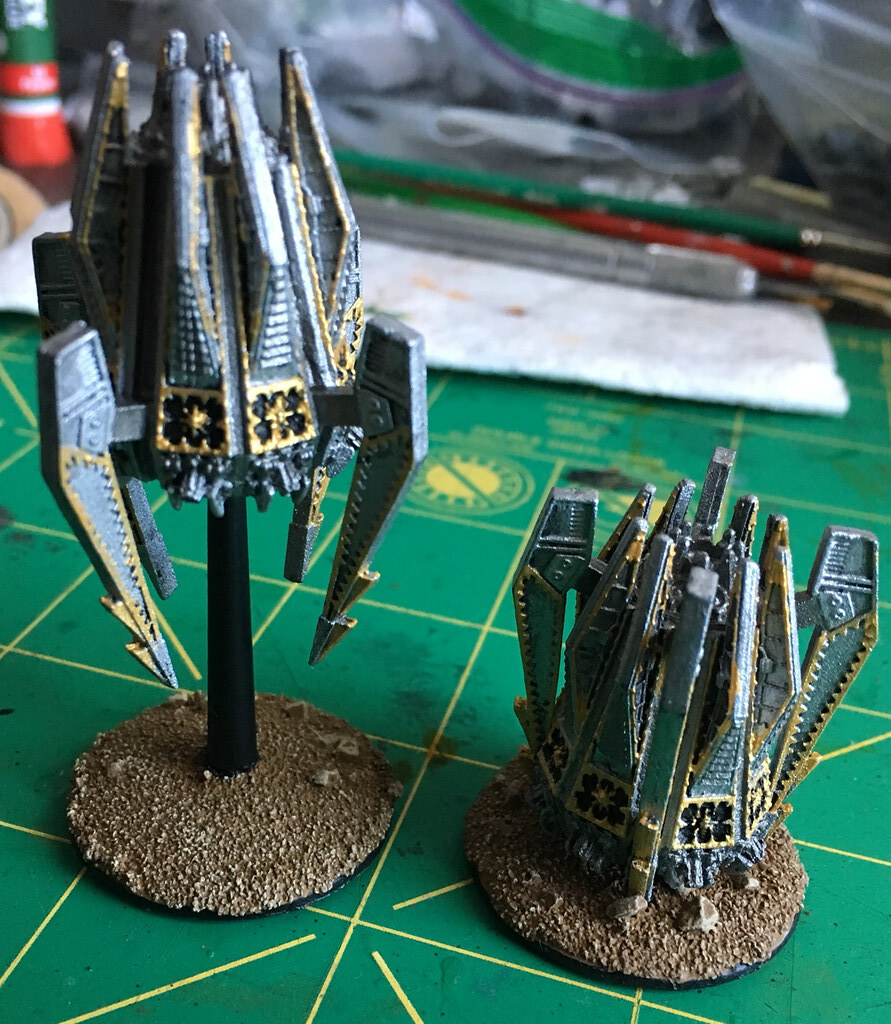 Along with that, as previously mentioned I also finished two pairs of vehicles meant for special scenarios or as alternative objectives for my Iron Warriors.  A few years back, a guy in the gaming group gave me four "stretch Rhinos" that I believe he had sculpted and cast up.  They were a cool novelty and I hadn't really planned on using them anywhere directly in my army... but I'd always sort of earmarked them for use as bridgelayers and/or recovery vehicles.  Well, between GHQ's 6mm M104 Wolverine kit and Vanguard Miniatures' Centurion Engineer Tanks, I finally had all the parts I needed to finish my conversions!  (Note:  I have no business relationship with either company other than as a periodic customer - I love GHQ's micro armor, and Vanguard's Defeat in Detail range has been an excellent source of conversion bits over the years) 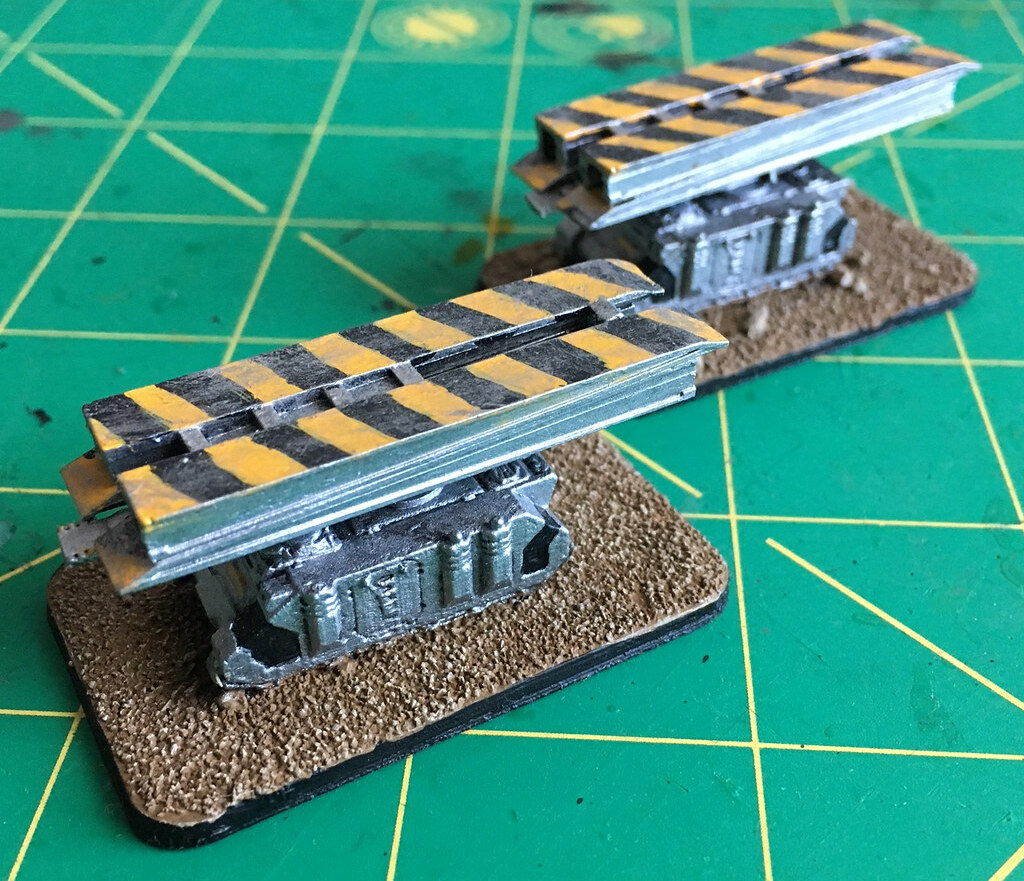 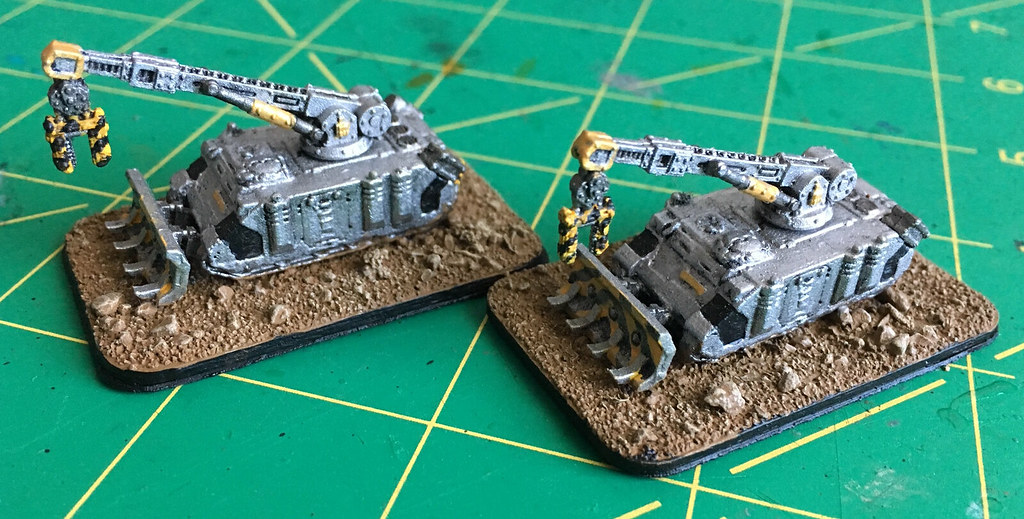 I'll freely admit I'm horrible at hazard stripes, and I'll definitely be going back over these guys later, but I'll probably save that for when I try to get the rest of my Iron Warriors up to the standard of my Suturvora...which is going to be another whole project in and of itself!

Finally, my second round of objectives!  So I've been using and abusing a trio of objectives over the years:  a Warp breach made out of a sheet of plastruct's water styrene combined with greenstuff, a pile of dead Crimson Fists evoking the old Rogue Trader artwork's last stand on Rynn's World, and a half-buried dead Knight Paladin.  While they're all fine, and reasonably anodyne/useable across a variety of armies... I could do bigger & better.  I've wanted to use the chaos portal on GW's Mutalith since it came out, and I liked the massive, buried chaos gate featured in the Horus Heresy Tallarn stories (um, spoilers?  sorta?)... so I took a crack at both this month.  The final in the set of three, a giant chaos altar made from pieces of the Age of Sigmar basing kit, still needs some paint and will be featured later. 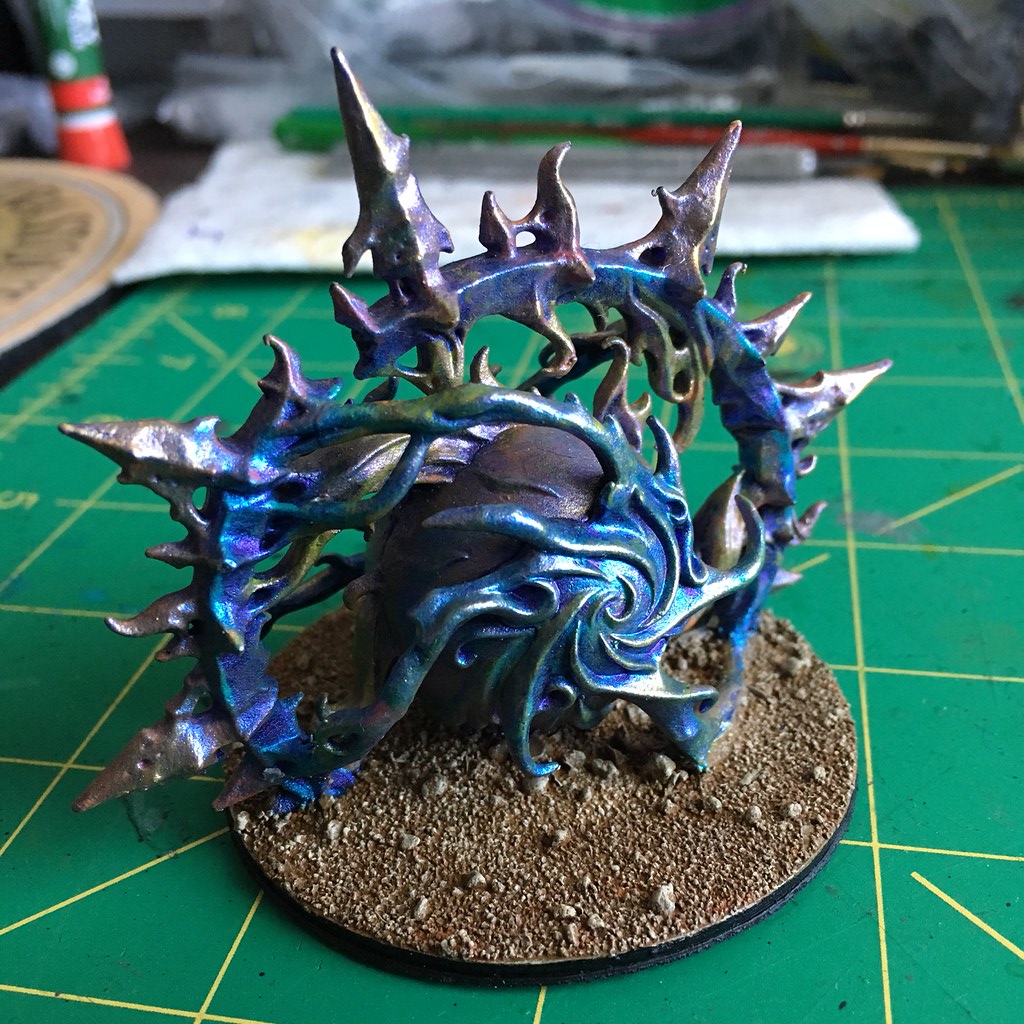 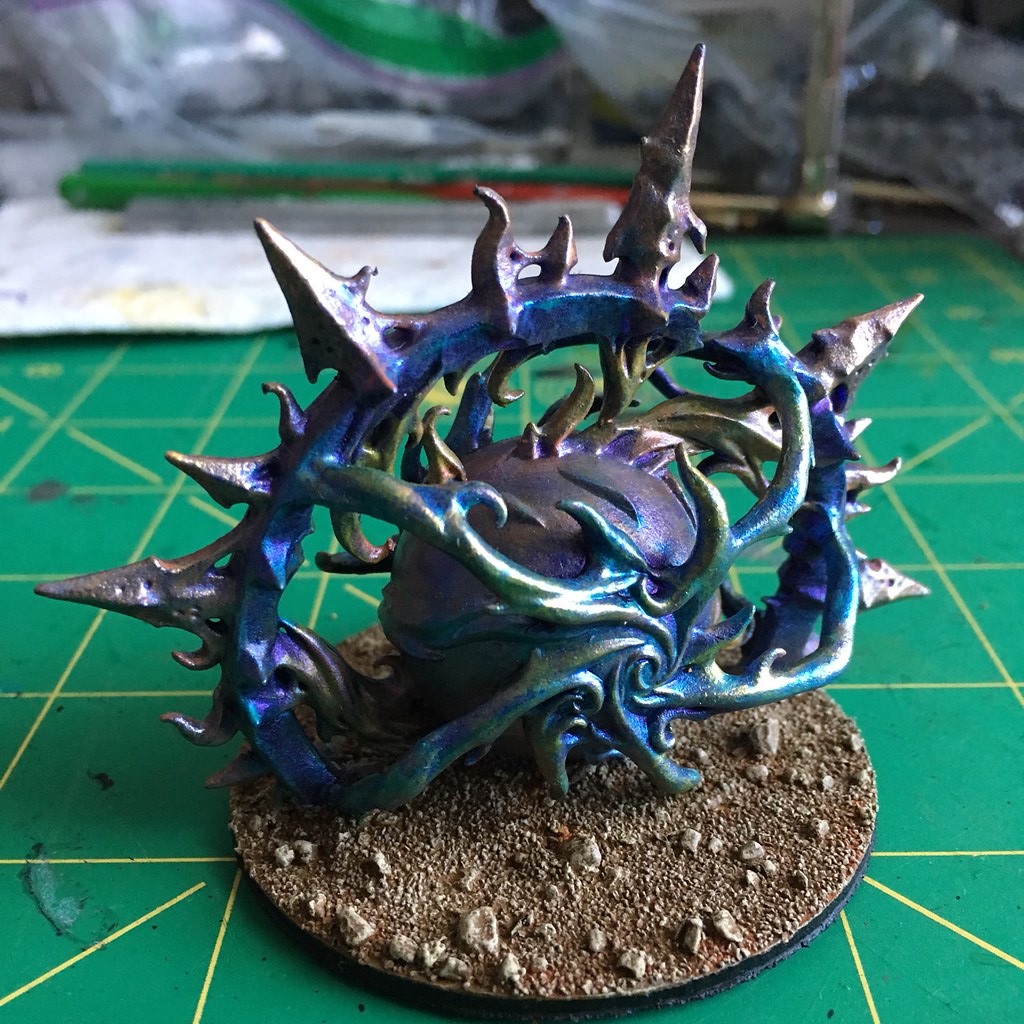 And the dormant chaos gate 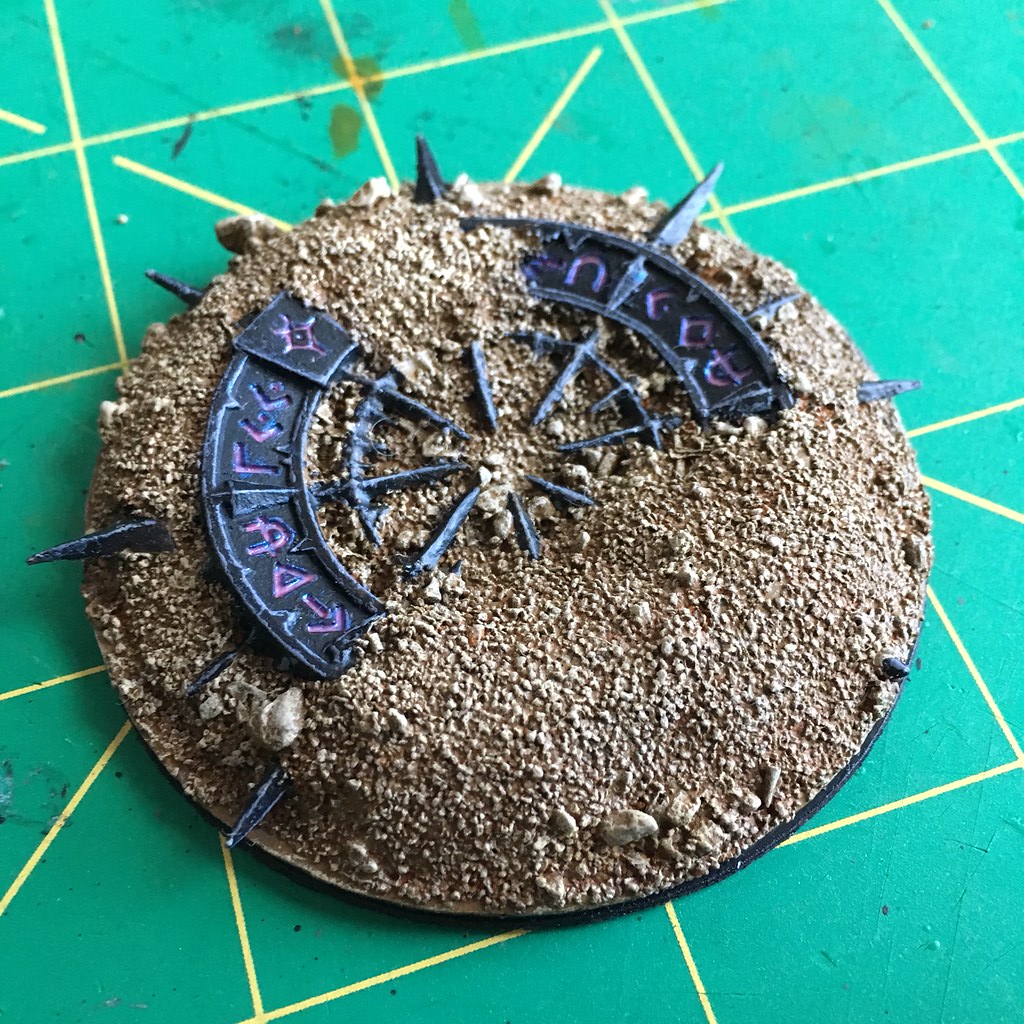 I used some two-color metallic acrylics on these that frankly weren't really worth what they cost (to get the two-color effect to work you really had to gob the paint on!), but the overall chaotic riot of color works for me on the breach, and the inset runes in the gate actually kinda work as advertised since I could afford to go a little heavier on the paint there.  Overall still quite satisfied with these, and hopefully I'll be able to put all three on the table at Cold Wars in March :)

That's it for now, hopefully the next post will have the chaos altar and my Van Saars, if not the Trireme :)
AMTL Chaos E:A Epic Epic: Armageddon Iron Warriors Ongoing Projects Titan