February 12, 2019
Day 16:  We've arrived at the site, a massive mound rising up from the desert floor.  I'm really excited!  My first real dig as a grad student on a Pre-Imperial site.  It was a heck of a trip to get out here, especially hauling all of our kit, but six weeks in the sun for six credits and a chance to be a named author on a research paper related to my thesis is too good to pass up.

Day 32:  The excavation is going amazingly well.  Even though there's only eight of us, we've managed to dig down and expose 3 meters of the structure already.  It's almost like the structure wants to be revealed.  This thing is like nothing I've ever seen before.  It looks like it was carved from a single massive piece of black marble, and it's nothing like the surrounding geology.  I can't imagine how the Pre-Imperial civilization that carved this got it all the way out here.  We have so many theories, and the team's been up late into the night speculating over this precursor/post-terran diaspora artifact and the civilization that created it.  We're all excited, especially the professor.  It's just... a little strange.  We're all the way out here in the desert, nobody and nothing for miles, not even any evidence of a town or anything surrounding the site...  And then there's the wind.  I swear I'm hearing voices, or at least I think they're voices.  Quiet whispering that's hard to notice by day but a littler clearer at night.  It's probably just my imagination, feeding off the isolaiton...

Day 48:  Much more progress made.  More and more of the structure is revealing itself to us, and the dimensions are really starting to take shape.  It's...massive.  We've cleared the shallow caves about halfway down.  Starting to wonder at the ritual significance of these - did they conduct parallel ceremonies in here?  We haven't found any ritual detritus, but there has to be something.  Why would a culture build something this massive here?  Things are getting a little weirder though. The professor... he's even more excited, if that's possible.  And then there's those robes he's taken to wearing; they're not his academic garb, but something...else...  The whispering is starting to get a little louder, a little clearer, too.  At night, when it's quiet, if I listen really carefully, I can almost make out words...

Day 64:  I understand now.  It's all so clear.  The structure, its purpose - the voices have explained everything.  I have to go now; the professor is waiting for me.  We have work to do. 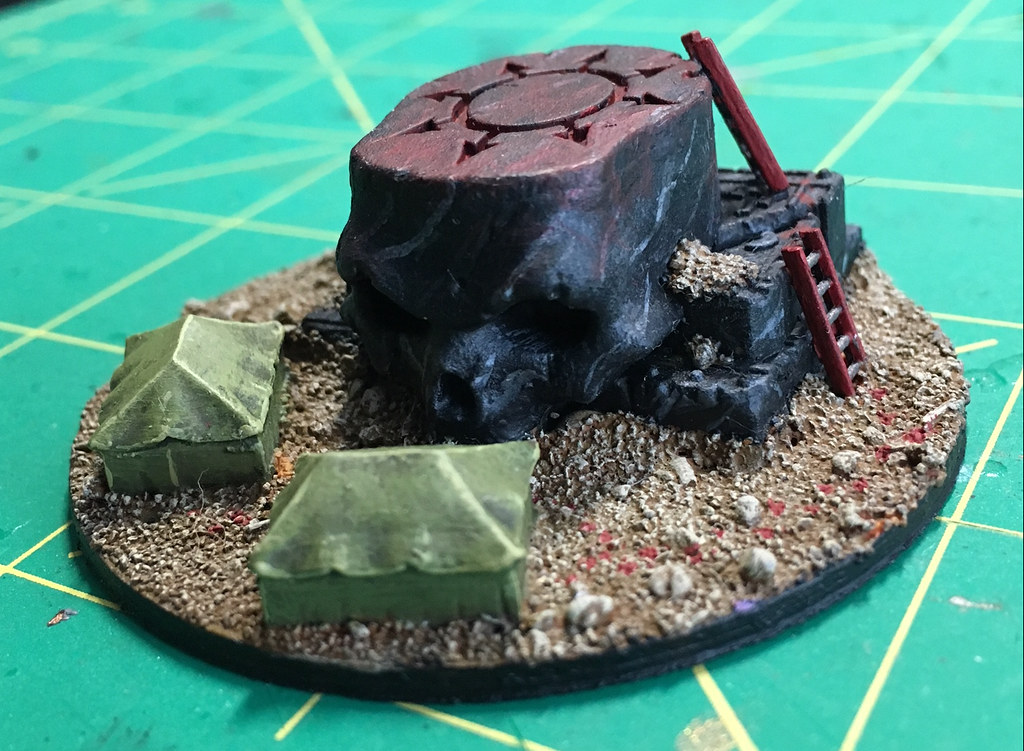 +++The last known location of the Tallarn Institute of Technology's anthropology department's graduate summer fieldwork expedition.  Area quarantined by the Inquisition and scheduled for orbital bombardment.+++

I finally got around to finishing the third objective marker for my Chaos armies.  Happy to be able to call that project completed for now :)

Apologies for the poor lighting; it's snowing today and overcast all week, and I don't have room for a good light box setup in my hobby space, so I'm making do. 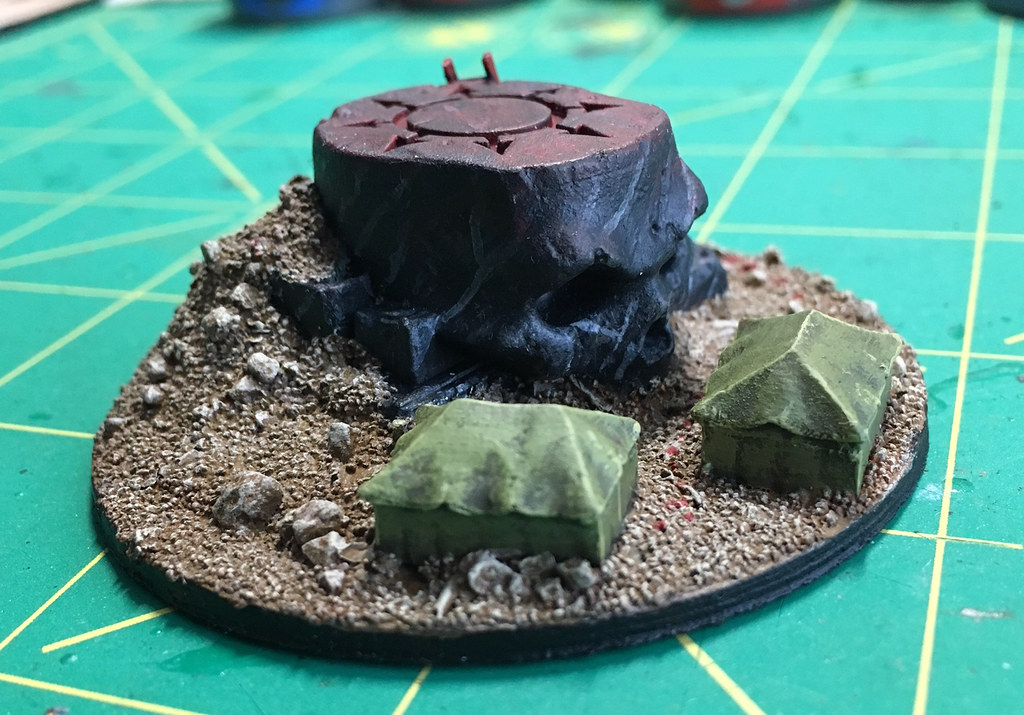 The tents came from GHQ, and the ladders are from Plastruct's N-Scale line.  The "altar" is a hero base detail from the Age of Sigmar line, and the rest is greenstuff and basing material.

Not bad for a first attempt at marble, although I should probably thin the veins a bit more, and maybe reduce the amount of bloodstaining on the top of the altar.  Still, between this, my dormant Chaos Gate, and the Warp Breach objective marker, I like to think I've set up a miniature narrative around the beginning of a massive Chaos invasion here :)

I have some gun emplacements to finish ahead of Cold Wars, but after that, the next post or two should start covering my Van Saar gang.

2019.02.13 EDIT:  The sun came out this morning, so I managed to snag a couple of better photos!
Chaos E:A Epic Epic: Armageddon Iron Warriors