June 25, 2019
I am not Sun Tzu.  I have a lot to learn about grand strategy, and 7 (?) years into regularly playing Epic:  Armageddon (read:  ~ once a month-ish?), there's still nuances of pre-battle planning, objective placement, and deployment, as well as late-game positioning, strategy, and playing to the scenario objectives that I'm learning.  Those lessons are often humbling, but painful lessons are the ones you remember and learn from best, right?

So, NEAT XII.  I decided to take my Chaos-themed AMTL force, Legio Suturvora, after not having played them since Fall In! last November.  In retrospect, only playing an army for tournament games isn't all that smart, or that fair to my opponents, but I've been working to get Iron Warriors playtests in for a while, and I'd recently painted four more titans for Suturvora, so... 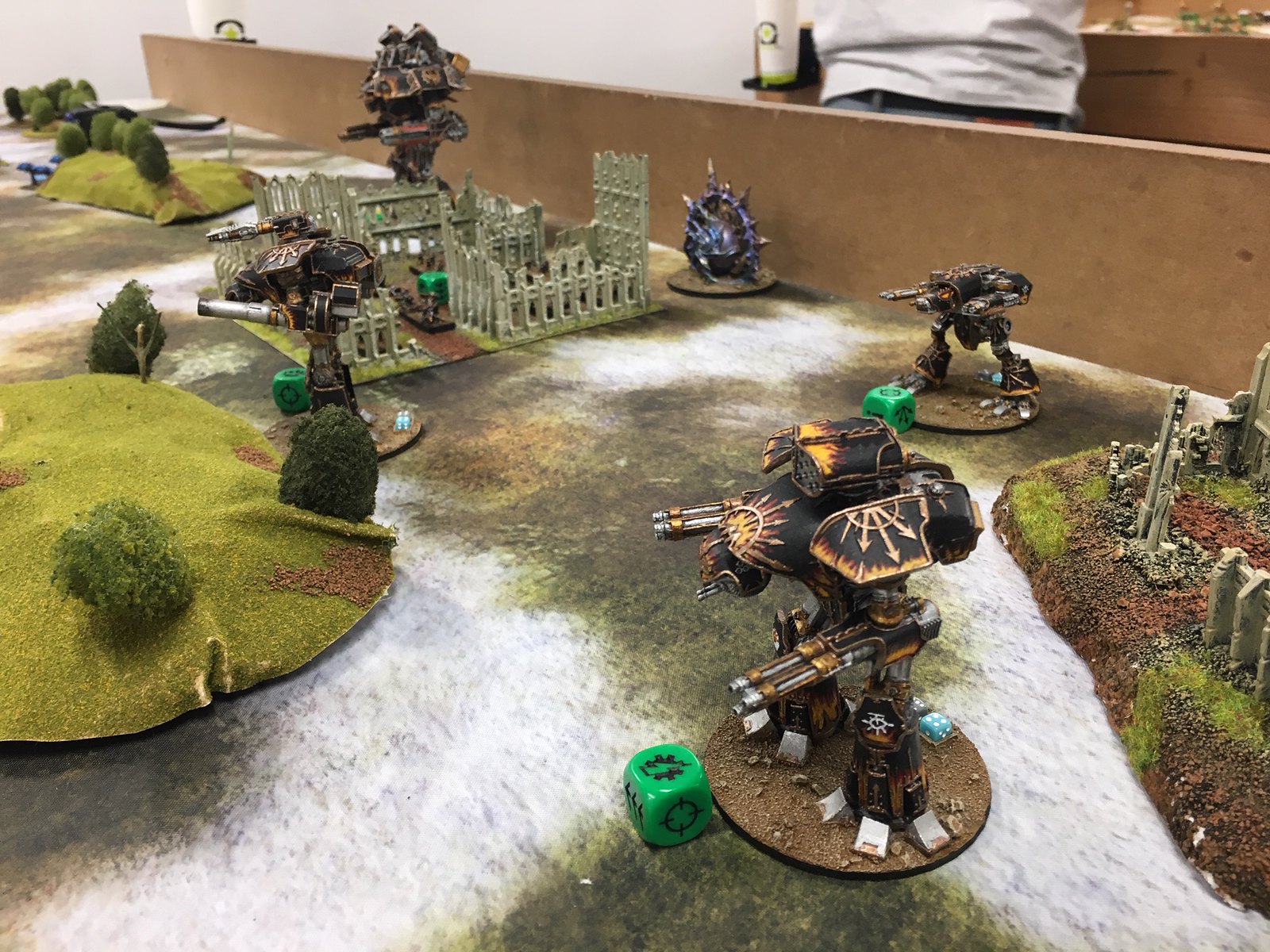 Five activations.  Yup!  Not nearly as bad as you'd think, frankly.  Yeah, turn one you spend more time maneuvering than shooting, but there's enough firepower there to batter your opponent down on turns two & three.  No, you're probably not going to wipe anybody's BTS out unless it's a smaller, more elite formation, but if you can draw a bead on it, you'll be able to at least break it.

"Warlords are overcosted and underpowered."  Yes, conventional wisdom says Warlords suck, but most of the people playing with Warlords are using them as support in a Codex Space Marines or Imperial Guard list where it doesn't do anything the army can't do better elsewhere, and nine times out of ten they should have taken two Warhounds anyway.  On the other hand, a big beefy BTS with unsuppressable AA and the ability to lock down fire lanes shouldn't be underestimated.  My one caveat is that you absolutely have to give it at least 2 weapons with a range >75 cm.  You move slowly, assuming you even have a reason to get out of your deployment zone, so the reach is vital.

"No aircraft?!"  Again, not as much of a drawback as it sounds on paper.  I kept the three battle titans within 30-45cm of each other until late in turn three for all three games, with the Warhound hiding within the protective AA triangle for most of that time.  Ground attacks, other than long-range Thunderhawk sniping, typically had to take flak on the way in and out, and over the course of three games, I managed to bag four Thunderbolts, two Marauders, and almost got a Thunderhawk too.  For 150 points, a single squadron of Thunderbolts wouldn't have accomplished half that.

Enemy Target Priority.  See that one Reaver with two laser blasters?  Yeah.  People facing AMTL are typically -cynically- going to assume they can only kill one titan.  The Warlord is too intimidating for all but a dedicated drop assault list, especially with the Demi-Century lurking nearby.  The dual quake Reaver can throw 10 attacks back in close combat with that laser burner.  By process of elimination, that makes the laser blaster Reaver (with 12x AT3+ shots, too!) the highest kill priority for most opponents. 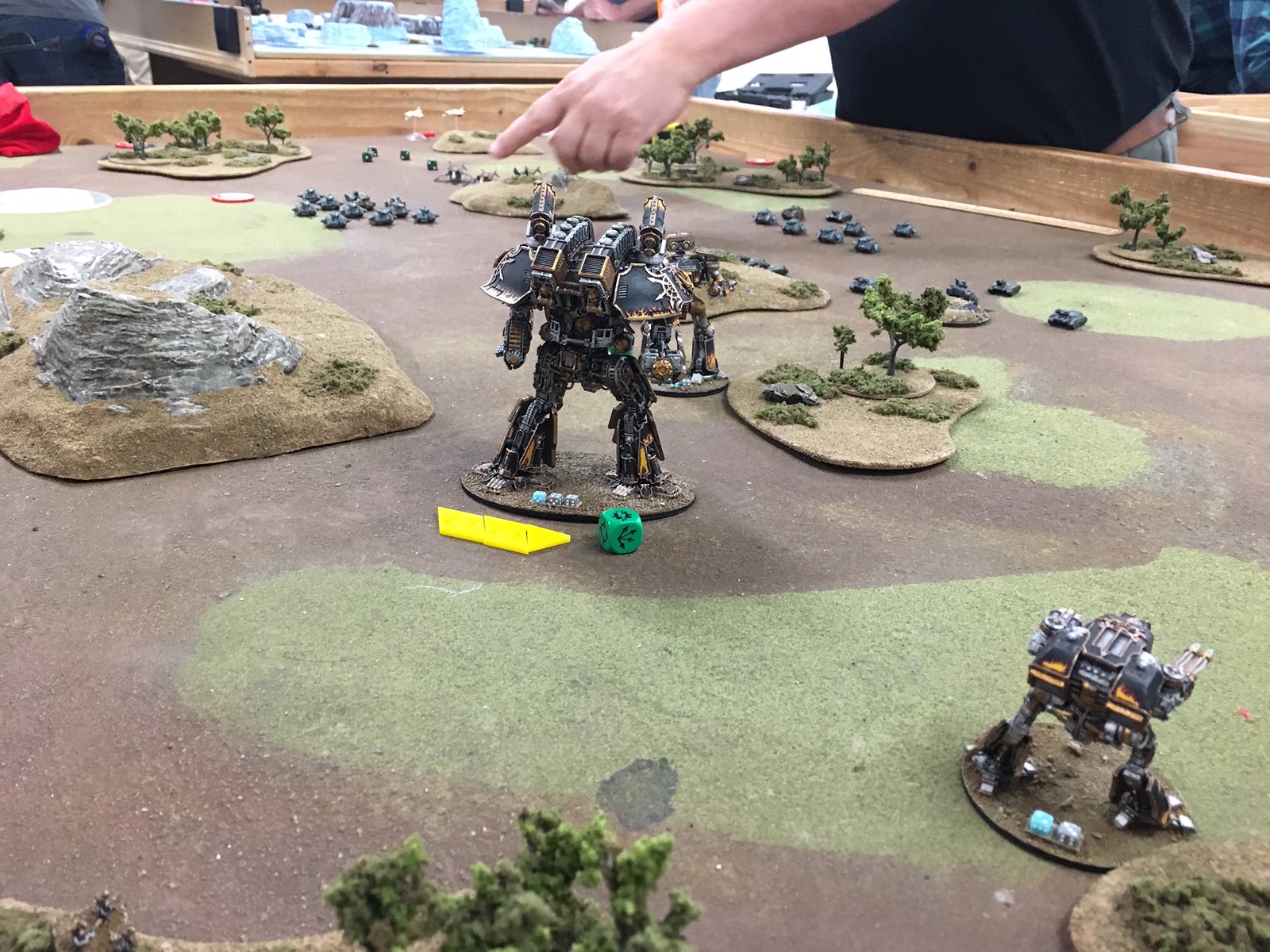 I probably could have won Game One on points in turn four, but I threw it away late on turn three due to bad generalship.  Dino loaded up on Thunderers to keep his activation count high, which worked out well for him and helped him keep the pressure up.  I smelled blood in turn three and tried to wipe out his BTS... but I pulled a unit off my Blitz to do it, which gave him the 2 victory conditions (Blitz, DTF) to win it.  If we'd gone to turn four, I definitely would have won on kill points, if not managed T&H & BTS. 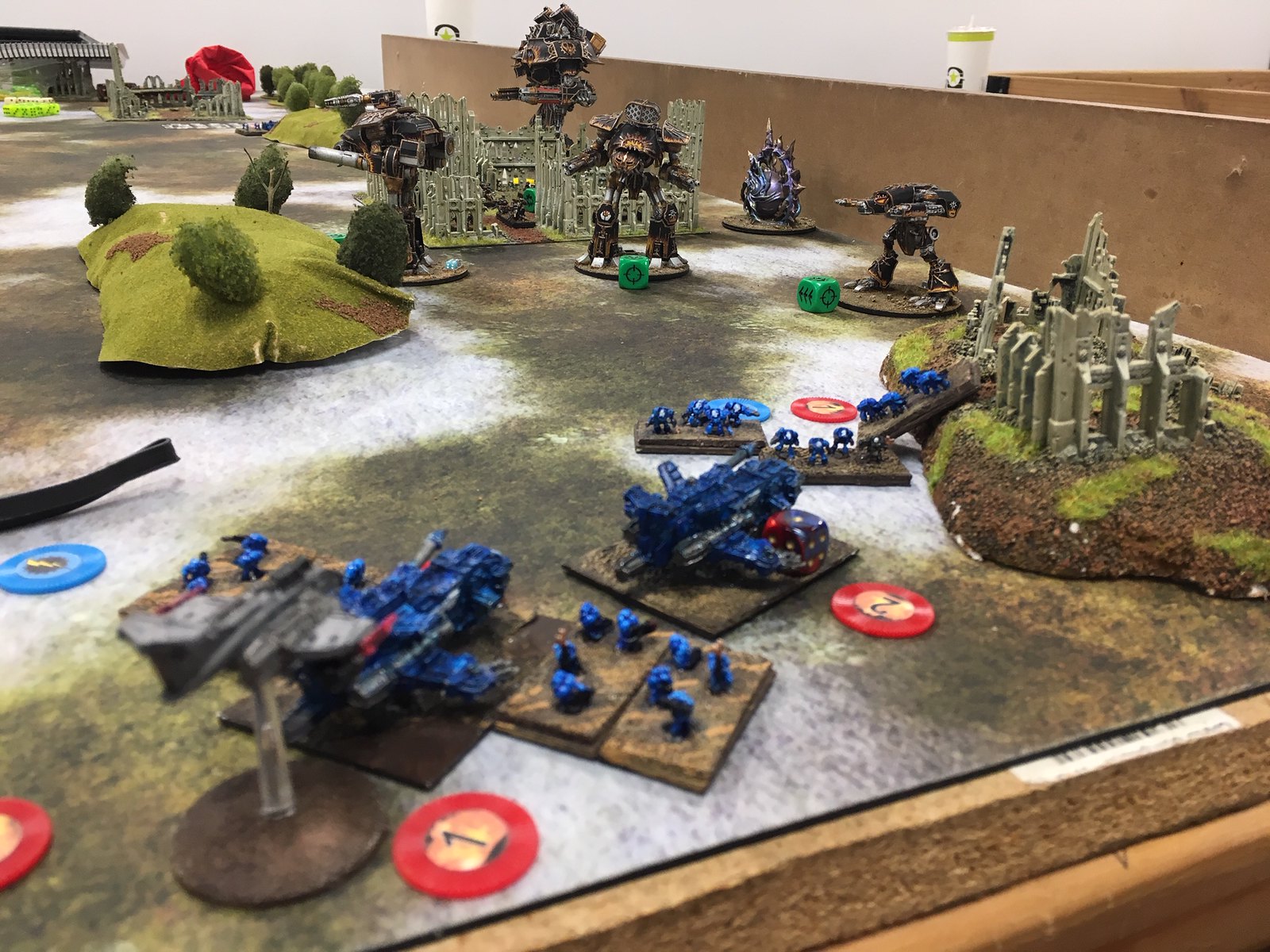 So this was fun.  I castled up turn one on my BTS with everything on Overwatch, and my opponent wound up playing against himself in his own head.  Rob did manage to break the laser blaster Reaver on turn two, but pursuit would have been suicidal.  Instead, my Warhound outperformed expectations and bounced a Terminator assault, and then my Reavers succeeded in shooting things to death in turn three.

Don't underestimate the power of 6 BP barrage - everything counts in large amounts.  Those two blast markers for coming under fire really make a difference both for prepping targets and wiping out broken formations.  People feared the laser blaster Reaver more, but the dual quakes Reaver wiped out two formations in a single salvo on turn three (Scouts, BTS Terminators) and cleared an objective for me.  IIRC this game ended 2-0 AMTL - I couldn't claim TSNP, but I managed T&H off of doubling the dual quake Reaver, and BTS off of the failed air assault & cleanup. 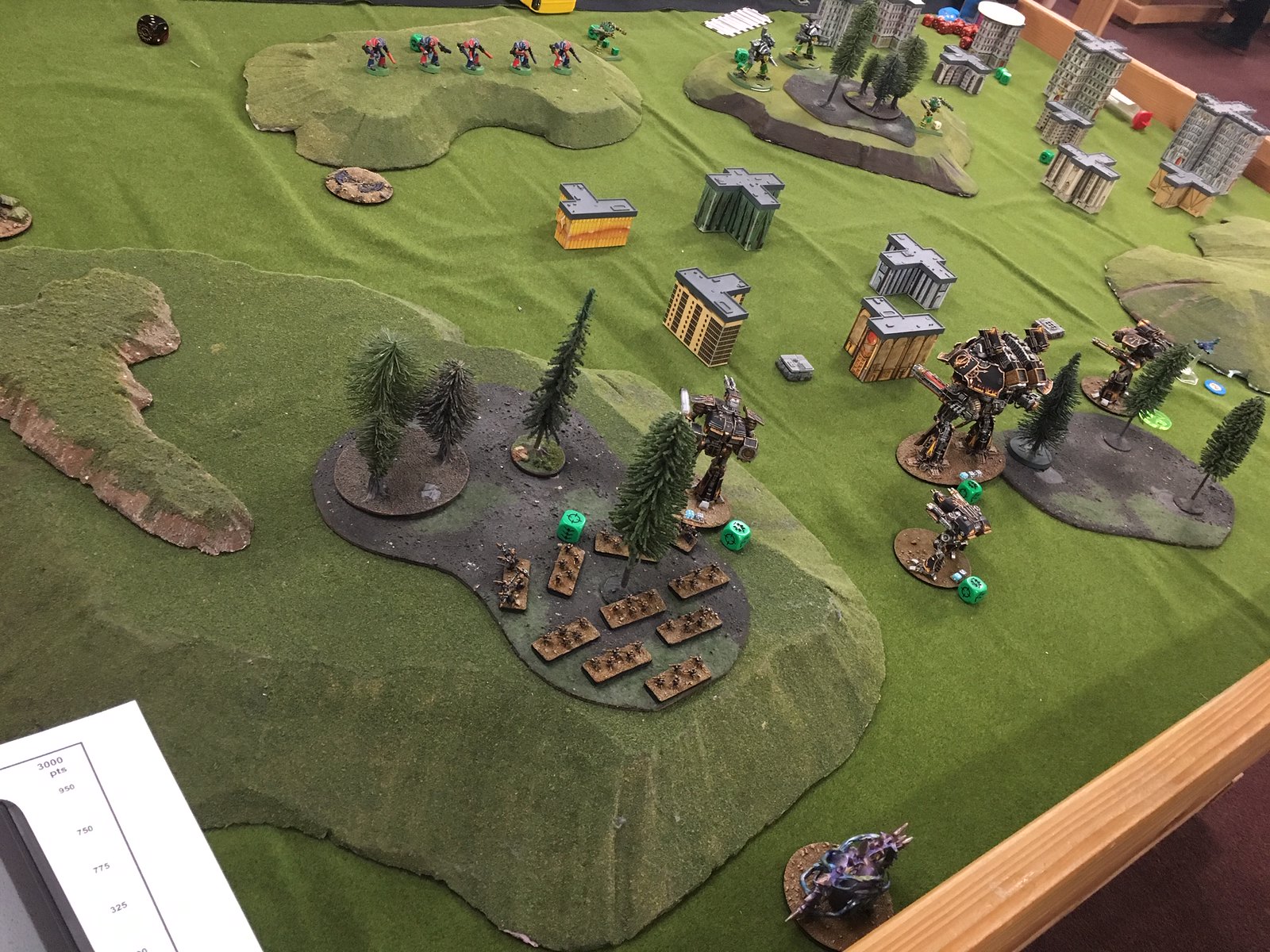 *SIGH*  It's becoming a thing - if I take titans to a tournament, I end up playing another AMTL list on turn three.  At Fall In! it was Karl, and at NEAT I squared off against Tim.  Not quite a mirror match - Tim's dual quake Reaver sports a carapace landing pad, his dual laser blasters Reaver carries a laser burner, and he replaced the Warlord with two more "Mastiff" Warhounds and a Forge Knight formation, but close enough.

The difference here was Tim had more discreet shots per Titan, and my barrage-heavy list was geared toward engaging large formations of infantry and/or armor.  We nearly wound up playing corners, just from deployment.  Tim made the right move - pouring everything into my laser blaster Reaver on turn one and wiping it out in early turn two.  I got close to returning the favor on his when it advanced out to the hilltop, but he took full advantage of it breaking under blast markers to drop it back to safety.  What really turned the tide was Tim getting THREE lucky reactor crits on me - two on the Warlord in close combat from his Forge Knights, and one from a Warhound shooting my dual quake Reaver in the back while it was trying to contest/claim objectives. 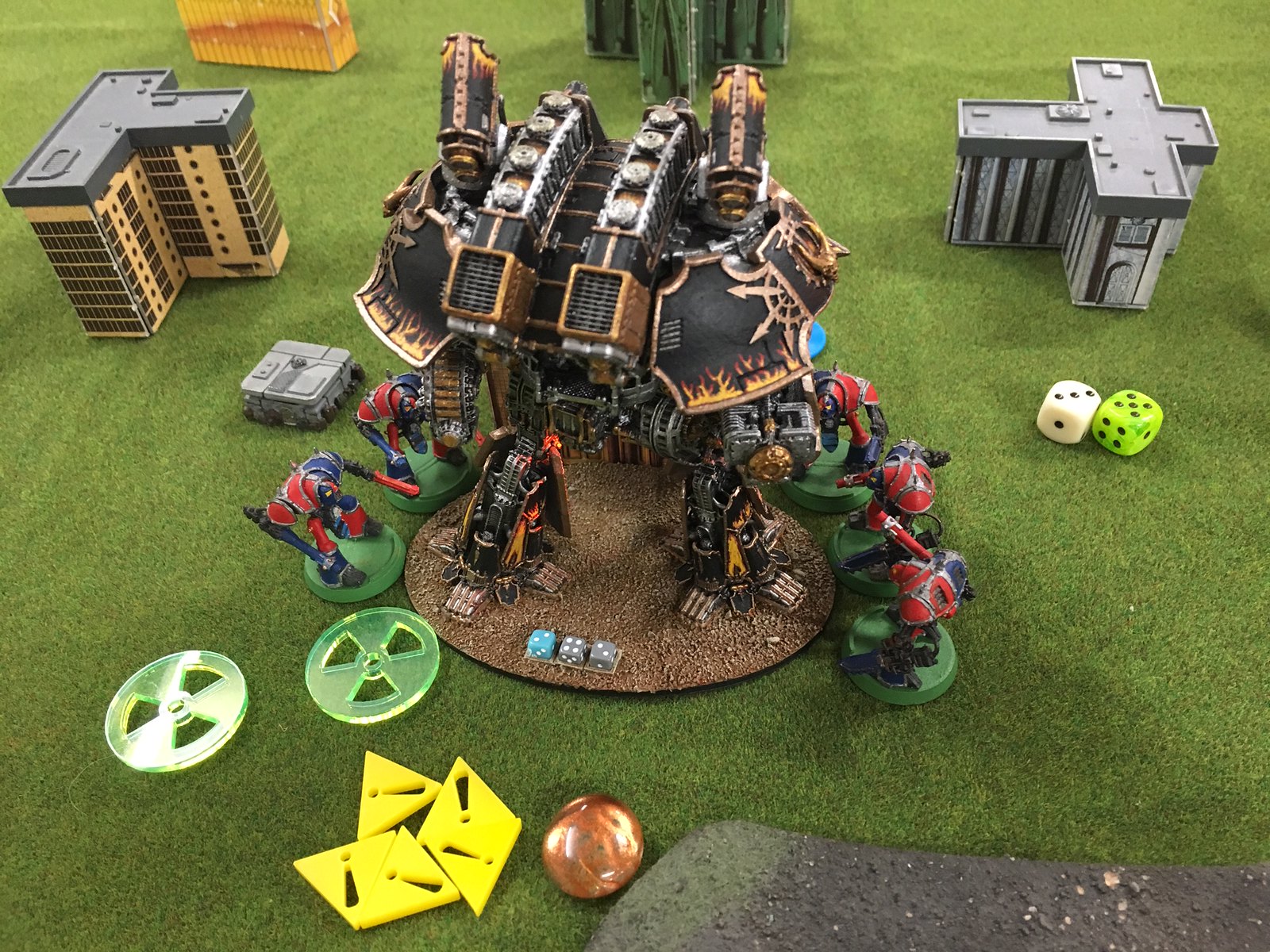 Things you never want to see... (my reactor critical tokens)

My Warlord managed to shake off the crits and stabilize its reactor... but my dual quake Reaver lost containment and went sky high.  Oh well.  We ended it on kill points on turn four, and Tim definitely had me there, knocking out two Reavers.  Needless to say, I have a pair of primed carapace laser blasters on my painting table as I write this.

So I'm going to continue painting Titans for Suturvora over the Summer/Fall, but I don't think I'll be taking AMTL to Fall In!  I'll probably get a couple of fun games in with them this year around Iron Warriors approval playtests to refine some lists and strategies, but I know people don't really like playing against them.

They are definitely a challenge, however.  Every activation matters, and you WILL always be out-activated, so turn one stalling by your opponent is pretty much a given.

Camp your Blitz.  You can't afford to move off of it.  A Titan on its own can't quite hold it, but a long ranged fire support Titan in firefight range of a Skitarii Demi-Century'll do the trick.  Of course, that also guarantees that whatever's advancing up to the midline to engage the opponent is going to carry the world's biggest bullseye, too, so be prepared for that.

Karl and I spent a while breaking down what worked and what didn't on Sunday afterward.  We'd come into the tournament assuming Warlords were a waste, and that we were pretty much throwing away our chances at winning.  Karl, however, took home the trophy, and aside from a really noob move and poor luck, I should have performed better overall.

Warlords are a rock, and as long as they have adequate range (don't go putting vulcan megabolters on your Warlord!), they can really dominate the battlefield / lock down travel lanes.  My Warlord sat on Overwatch in games two and three, and people busted their butts to stay out of reach.  Split-fire would be an excellent option, but sheer firepower can carry a decent amount of weight.  Is it worth putting 1/3 of your army in a single model?  Debatable, but that comes down to how you employ it.

Also, turbo/vulcan Warhounds are the way to go, if you're going to go light on Warhounds.  4xAP3+ & 4xAT3+ shots per turn makes it a fragile turret, but it's a fragile fast-moving, void shield-protected turret :D.  Inferno/vulcan Warhounds have their place too, particularly as a pack replacing an artillery Reaver, but you need the pack to dodge the single weapon surcharge and stiffen them up enough so they can survive a few turns of fire.

Someday I really want to throw down for a big mega-battle game with a few players on each side and ~4K per player so I can lay out Legio Suturvora in force, and give people enough points to account for & reasonably handle them too.

Between Karl's War Gryphons, Tim's Morningstars, and a handful of other truescale titans in the group, I'm pretty sure people could scrape together enough competition for me ;) 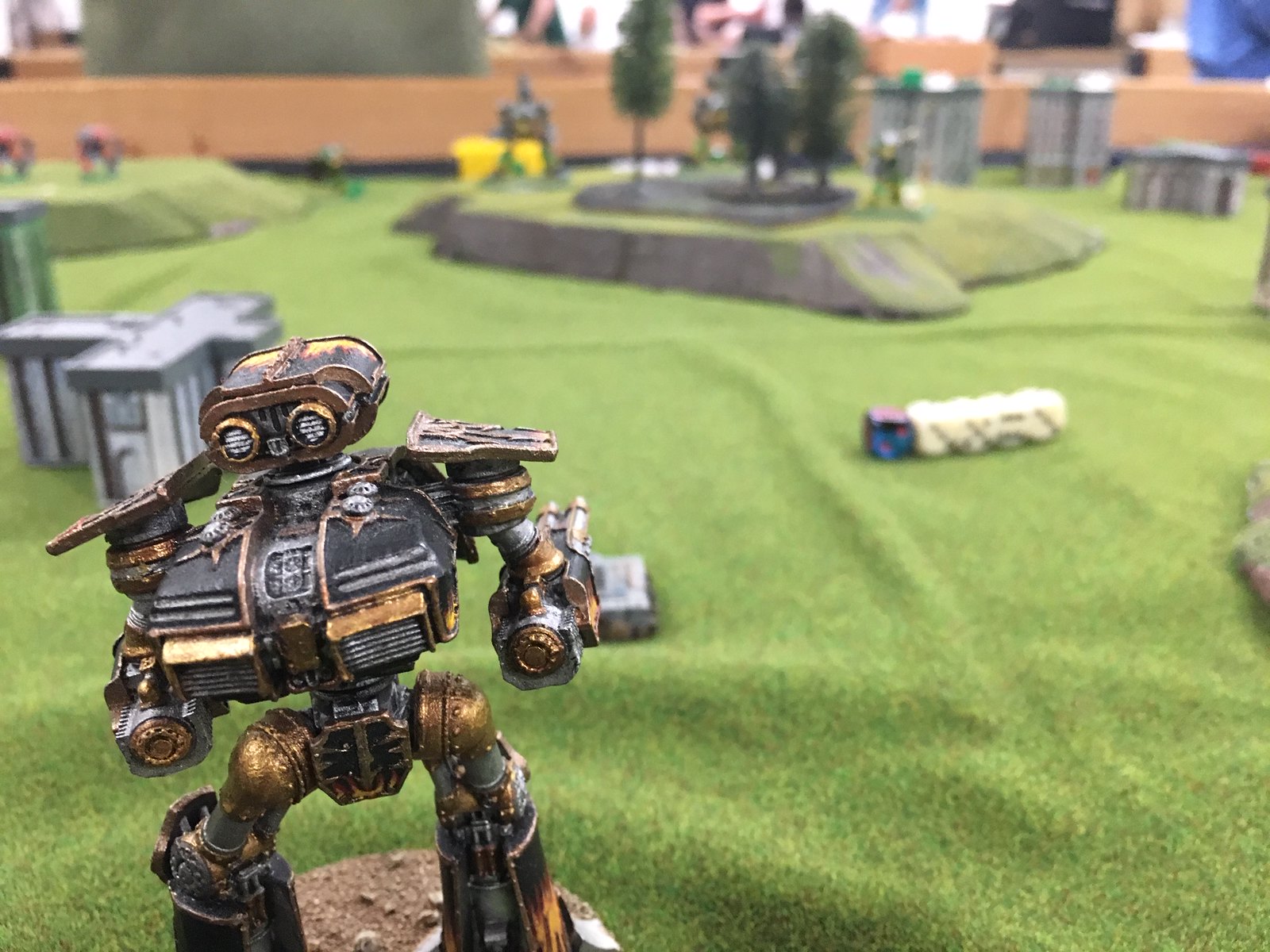