August 09, 2019
Work took me back up to CT last week, so I took advantage of that to get a game of Epic:  Armageddon in with a couple of the guys up north.  Rob and I got a 3000 point game in around mouthfuls of barbecue.  We probably *should* have gone to round four, but due to time we called it at the end of 3 and totaled up kill points.  At the end, Iron Warriors came out slightly ahead, 913 points to 828, so we called it a draw (but I still claim the moral victory!). 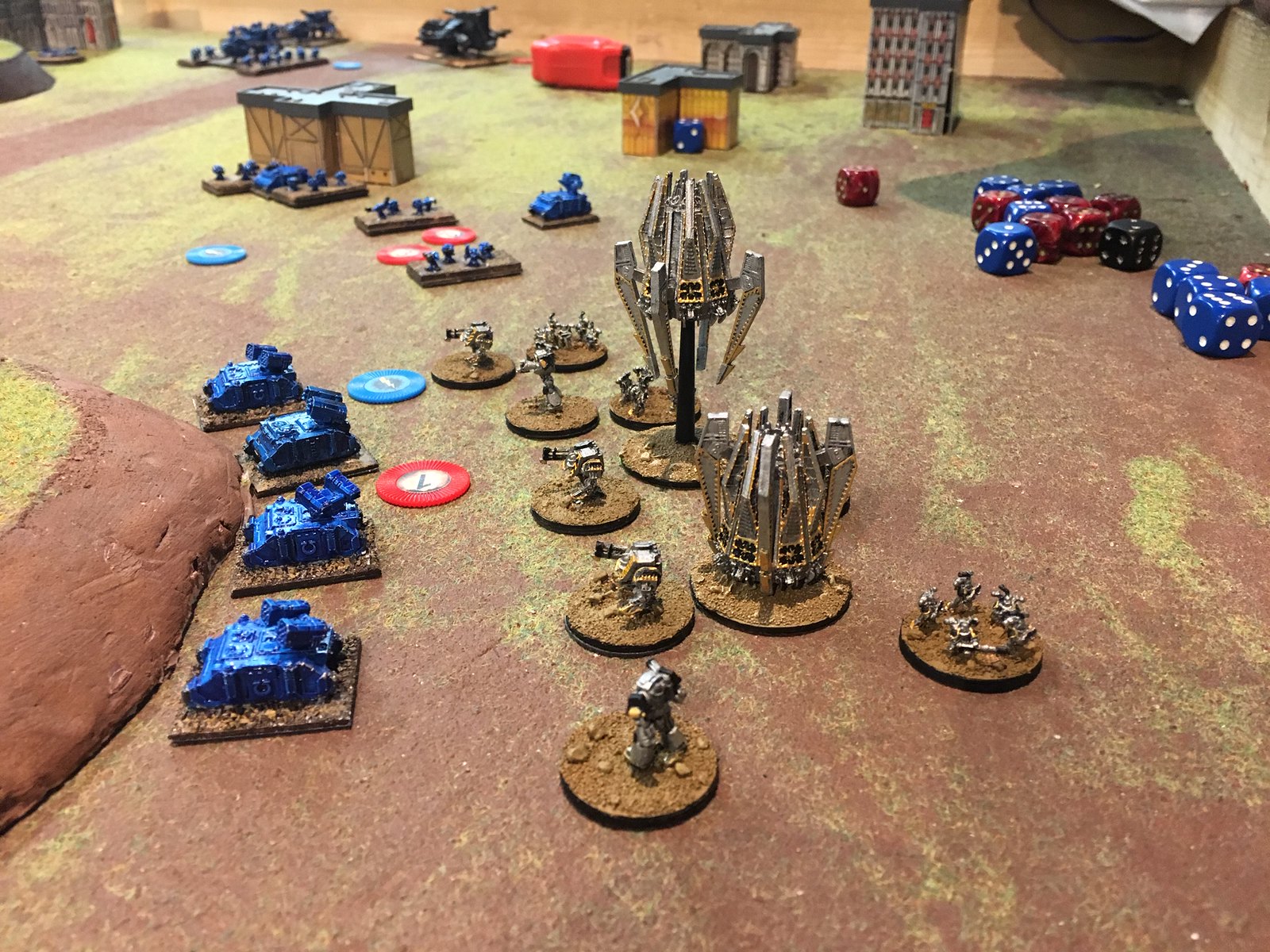 I like the Obliterator formation as a "distraction carnifex" - I'm not sure I used it as effectively as I could, plus I lost the initiative roll-off (or things would have been different), but they aren't a bad shooting-heavy alternative to a Terminator teleport. 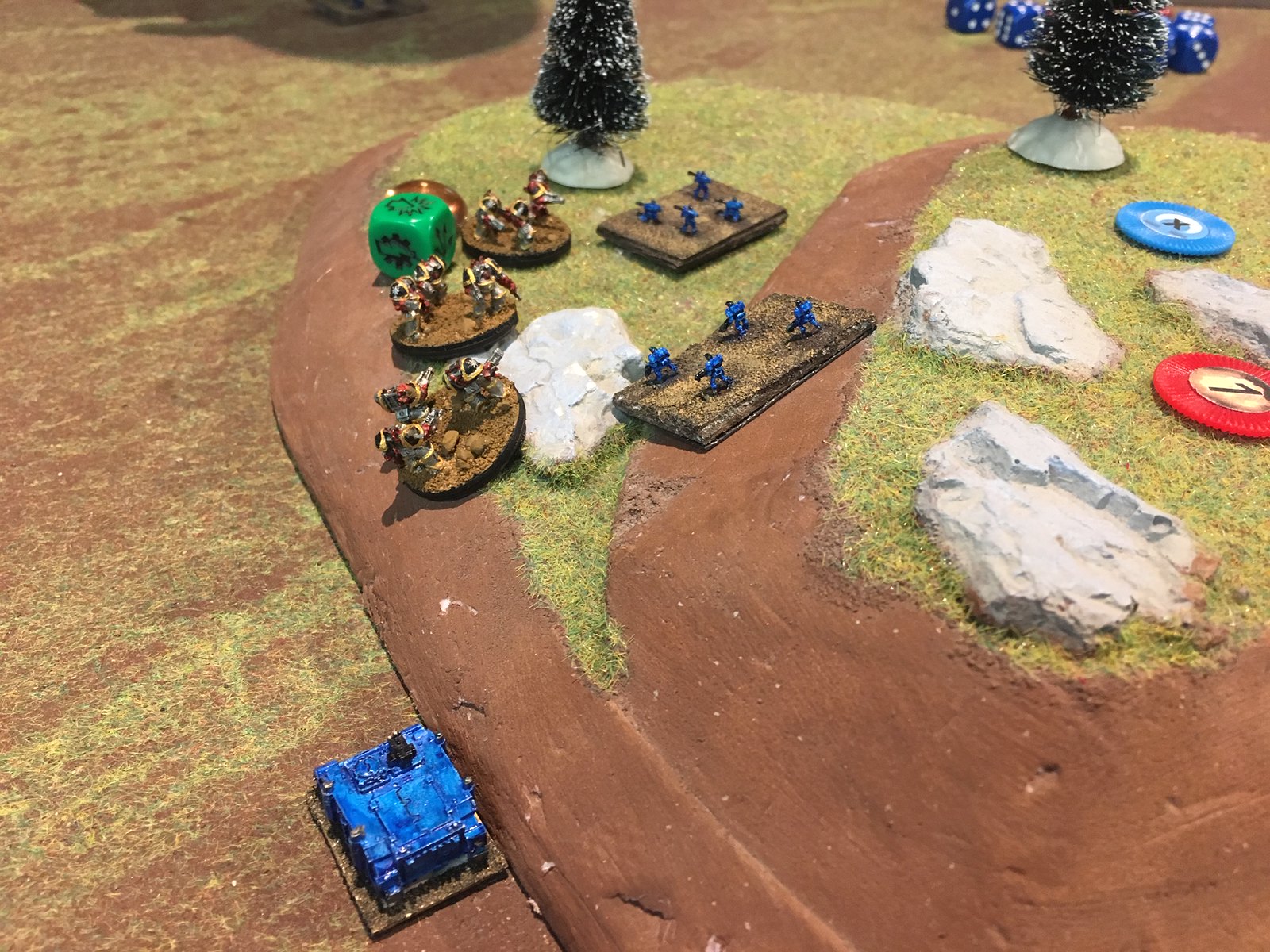 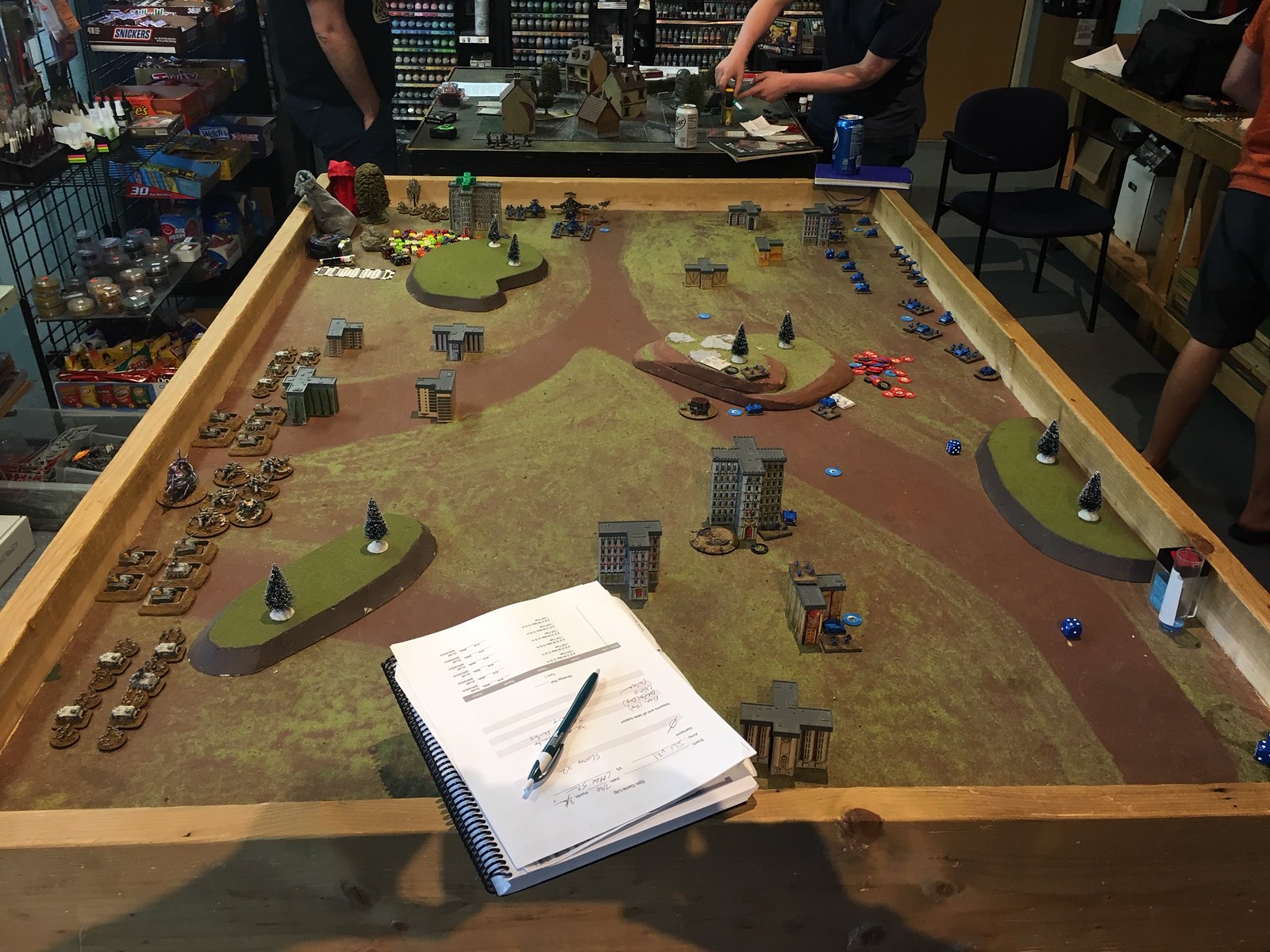 The Iron Warriors reserved their Chosen and Dreadnought formations off-board on their Cruiser, which held off on entering low orbit until Turn Two.  Likewise, the Obliterator formation stood down for Turn One.  On the Space Marines' side, both Terminator formations remained off-board, loaded on Thunderhawk Gunships.

The Iron Warriors concentrated their deployment hard on their right flank, overlapping AA bubbles from various integrated Stalker tanks and holding the center with the Defiler formation (with clear lines of fire up the middle of the board).  If the Space Marines wanted to air assault the Iron Warriors, it would be a very rough exercise.  On the Space Marines' side, the force was largely concentrated on their right flank as well, with Scouts garrisoned forward off of the midfield objectives.

The Iron Warriors won the initiative (although I would have happily gone second, given the activation disparity on this turn).

With the Marines' Land Speeders the biggest potential threat to tie up a formation or open a hole for an air assault, the right flank Basilisk battery poured on fire, only for the Marines to jink out of the way / save everything.  Setting up for future moves, the Marines then marched a Tactical formation up the left board edge, piling into a tower complex and setting up on the Iron Warriors' extreme left flank.  Retaining the initiative, the empty Thunderhawk came in for a ground attack, dumping a long range battle cannon shot into the Iron Warriors' left flank Basilisk battery but only inflicting a blast marker.  In response, the Iron Warriors' right flank Infantry Company (with the Warsmith) went on Overwatch.  The Marines' BTS Tactical formation doubled up toward the middle of the board.  After that, the Iron Warriors' left Basilisk battery poured fire into the Scouts occupying the hillside objective, knocking out a Rhino and one squad.  That Scout formation immediately rallied, digging in deeper and clearing their blast markers.  After that, the left flank Iron Warriors Company put themselves on Overwatch.  The Marine Whirlwinds doubled up toward the hillside objective to put themselves in a better firing position.  The Iron Warriors' Defilers overwatched to cover the middle of the board, and the Marine Land Speeders doubled up the left side of the board, preparing to support an assault on the Iron Warriors' left flank the next turn. 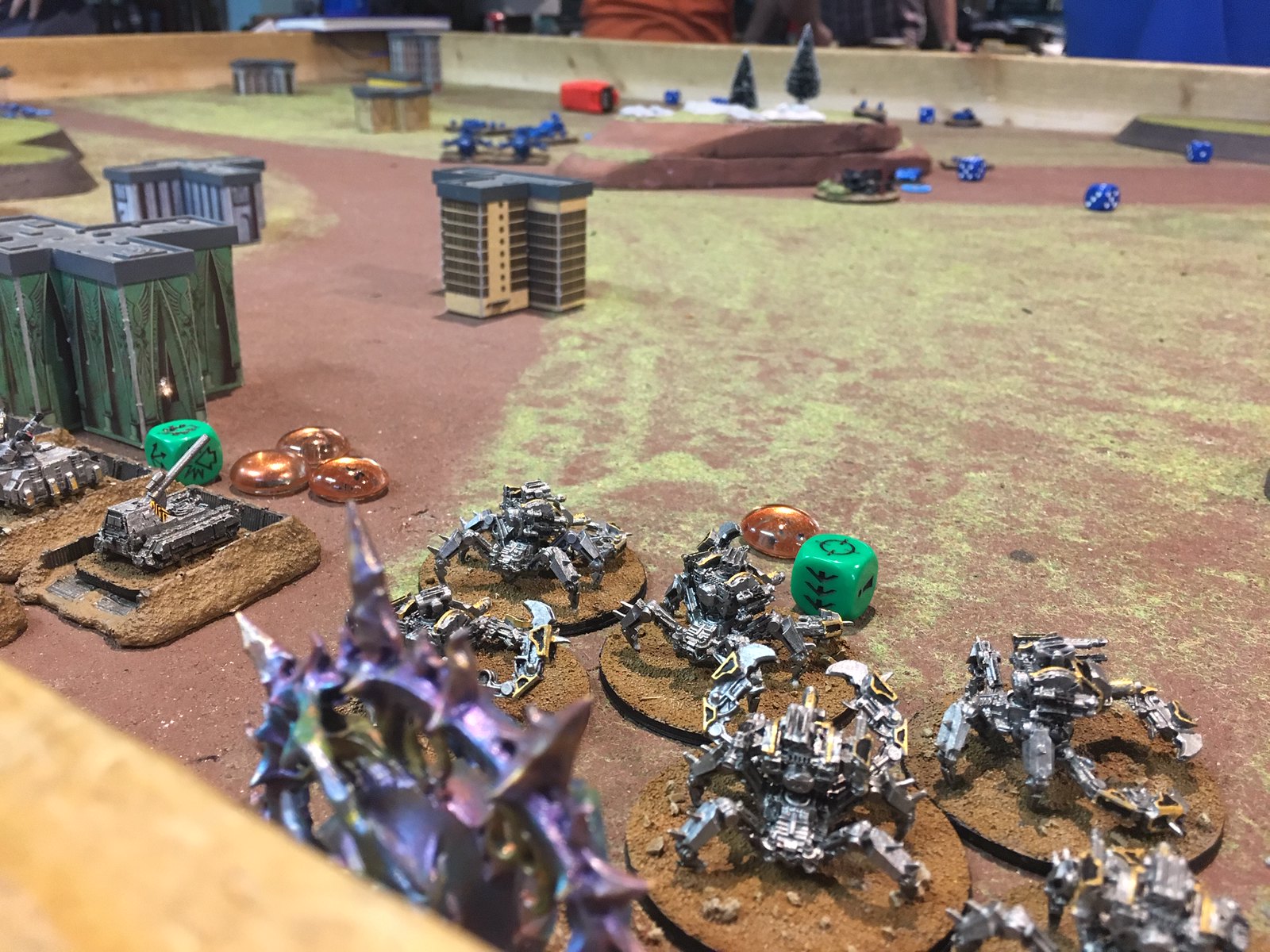 Finally, the two Thunderhawks with Terminators onboard came in on Ground Attack missions, one putting a blast marker on the Defilers, and the other knocking out a Basilisk in the left flank battery.  Seeing the AA coverage bubble, the Marines' Thunderbolt support stood down. 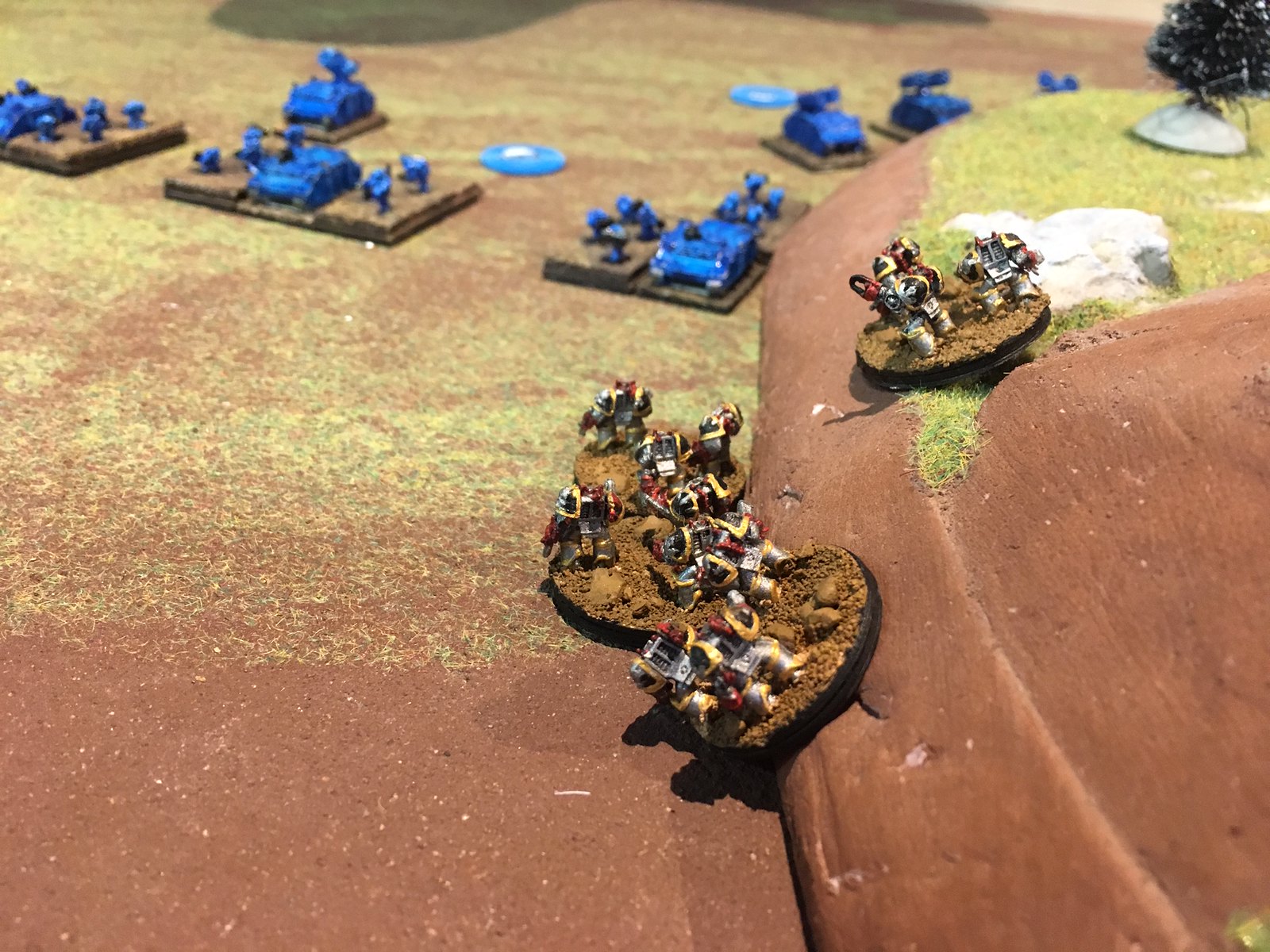 After that, both forces temporarily broke from hostilities for barbecue. 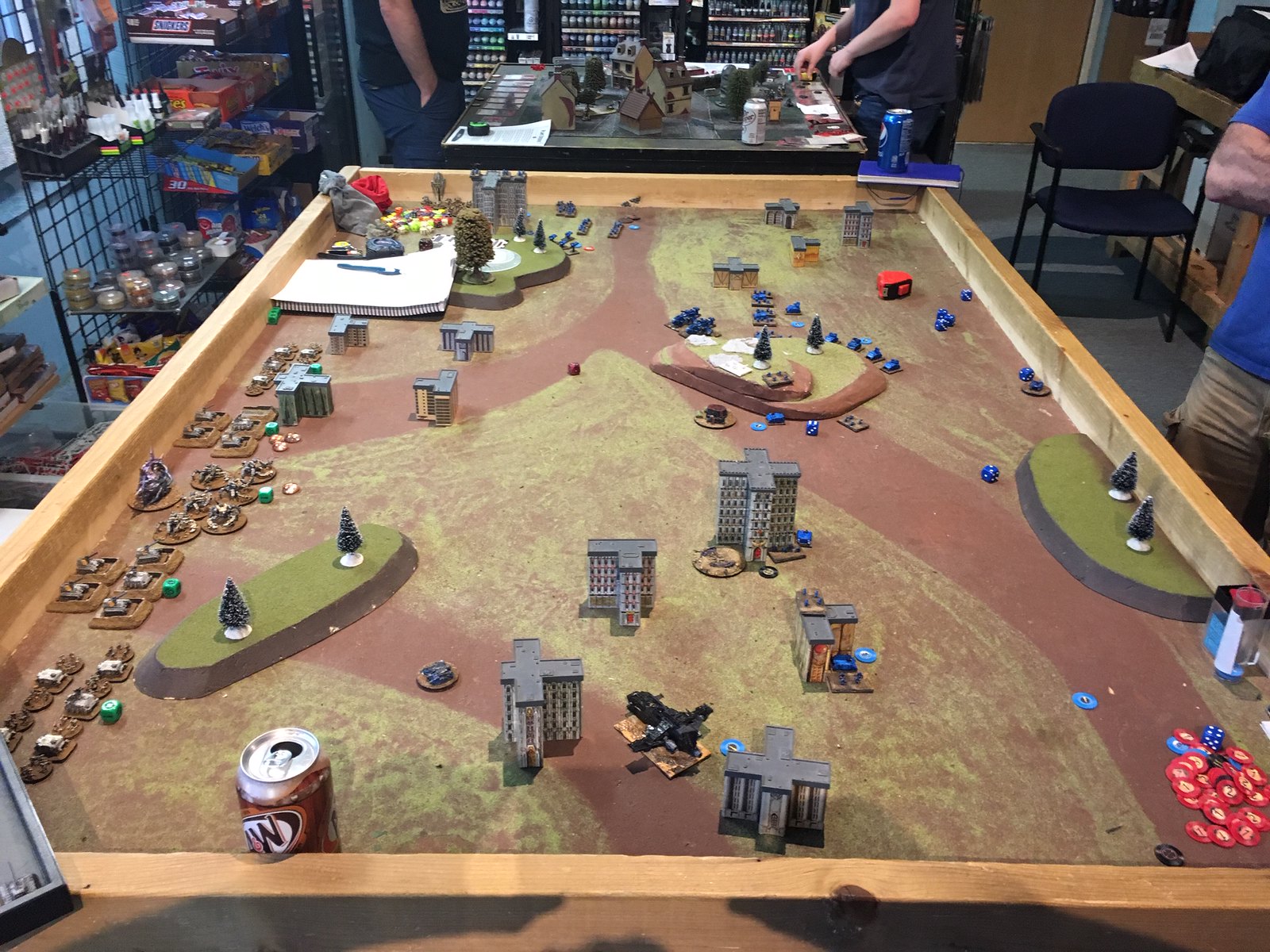 The Space Marines won the initiative. (curses! so much for a prepped assault...)

The Scouts on the wooded hill moved in to lock the Obliterators in their zone oc control, and fired on them killing one (seriously, dice?).  Retaining the initiative, the nearby BTS tactical formation advanced into range and poured more fire into the Obliterators, breaking them.  The Obliterators, being Fearless demon-cyborg monstrosities, stayed put.

Looking at their enemies' positions and knowing where their Dreadclaws would be coming down, the Iron Warriors retained the initiative and dialed in a pair of fire missions.  The right-hand Basilisk battery poured its full 4 BP into the BTS Tactical formation, killing four.  The left-hand Basilisk batter dumped significantly less firepower into the Whirlwinds, prepping them with a blast marker.  The Tactical formation on the Iron Warriors' far left flank advanced and weathered the Overwatch fire, losing one squad but pouring shots into the waiting Iron Warriors company and taking out two squads. 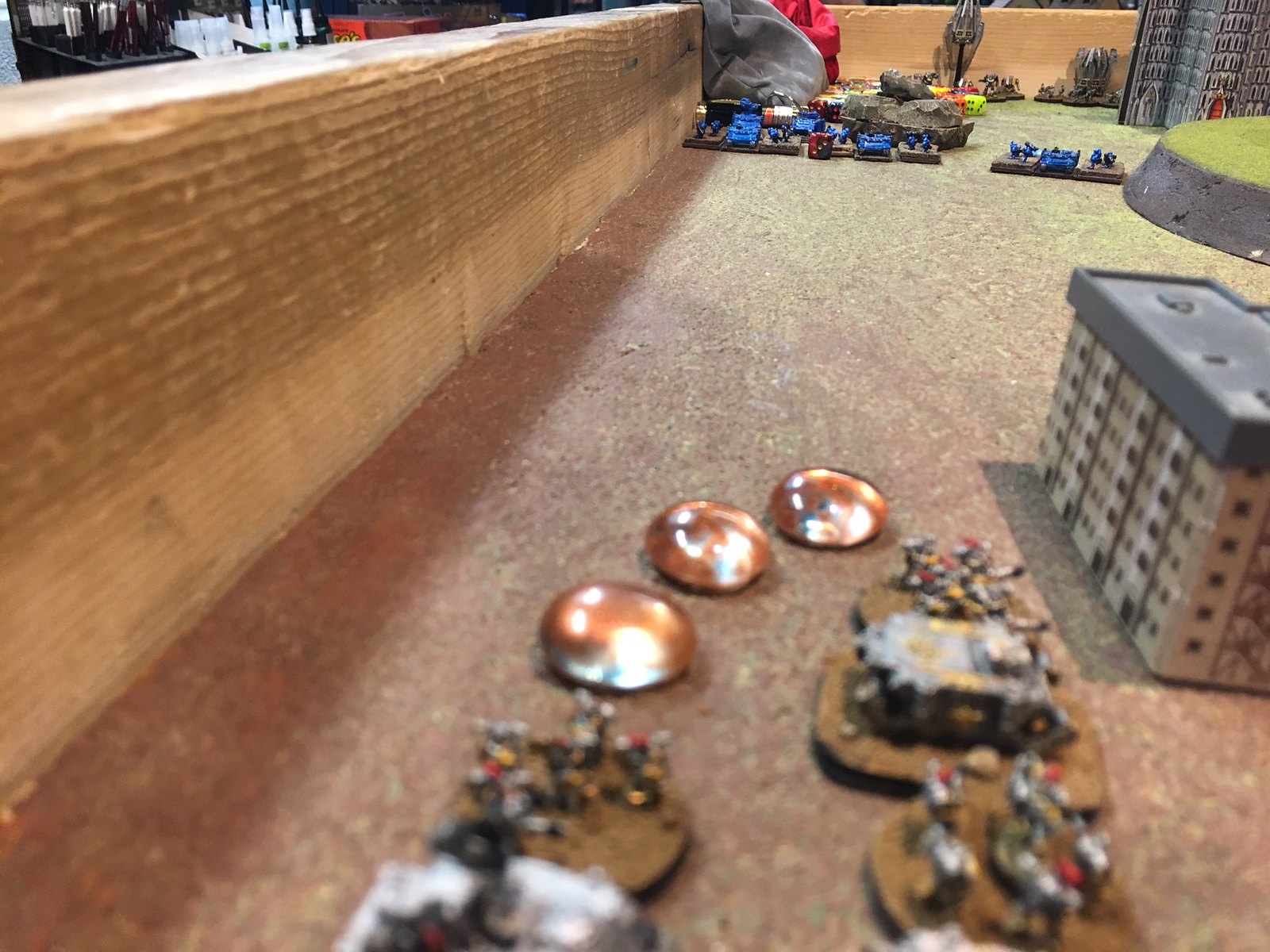 After that, the Marine Whirlwinds poured fire into the reeling Iron Warriors company, wiping out four more squads and breaking the company.  Stalling and hoping to draw a formation back into the pre-plotted orbital barrage's killbox, the Defilers advanced toward the left flank and took the scouts on the wooded hill under fire, killing one.  After that, the Marines continued to capitalize on the damage they'd wrought on the Iron Warriors' broken left flank, sending in the Thunderbolts and wiping out another squad.  In response, the Warsmith's Company doubled forward and toward the left, reinforcing the now-exposed right flank Basilisk battery.  Hammering on the broken Iron Warriors company, the Marine Land Speeder formation doubled over and poured on fire, wiping out another squad.

Running out of options, the Iron Warriors called in their Cruiser in low orbit.  While the orbital strikes failed to connect, the Dreadclaws came down to disgorge the Dreadnought pack and the Chosen force right on target, deploying behind the Whirlwinds and threatening the BTS Tactical formation as well.  While the Whirlwinds might have seemed like the most obvious target, the Dreadnoughts were much more interested in the BTS Tactical company next to them, and the fight went about as well as you'd expect, the raging Dreadnoughts wiping out the Tactical marines to a man (scored 12-5! after landing quite a few macro kills). 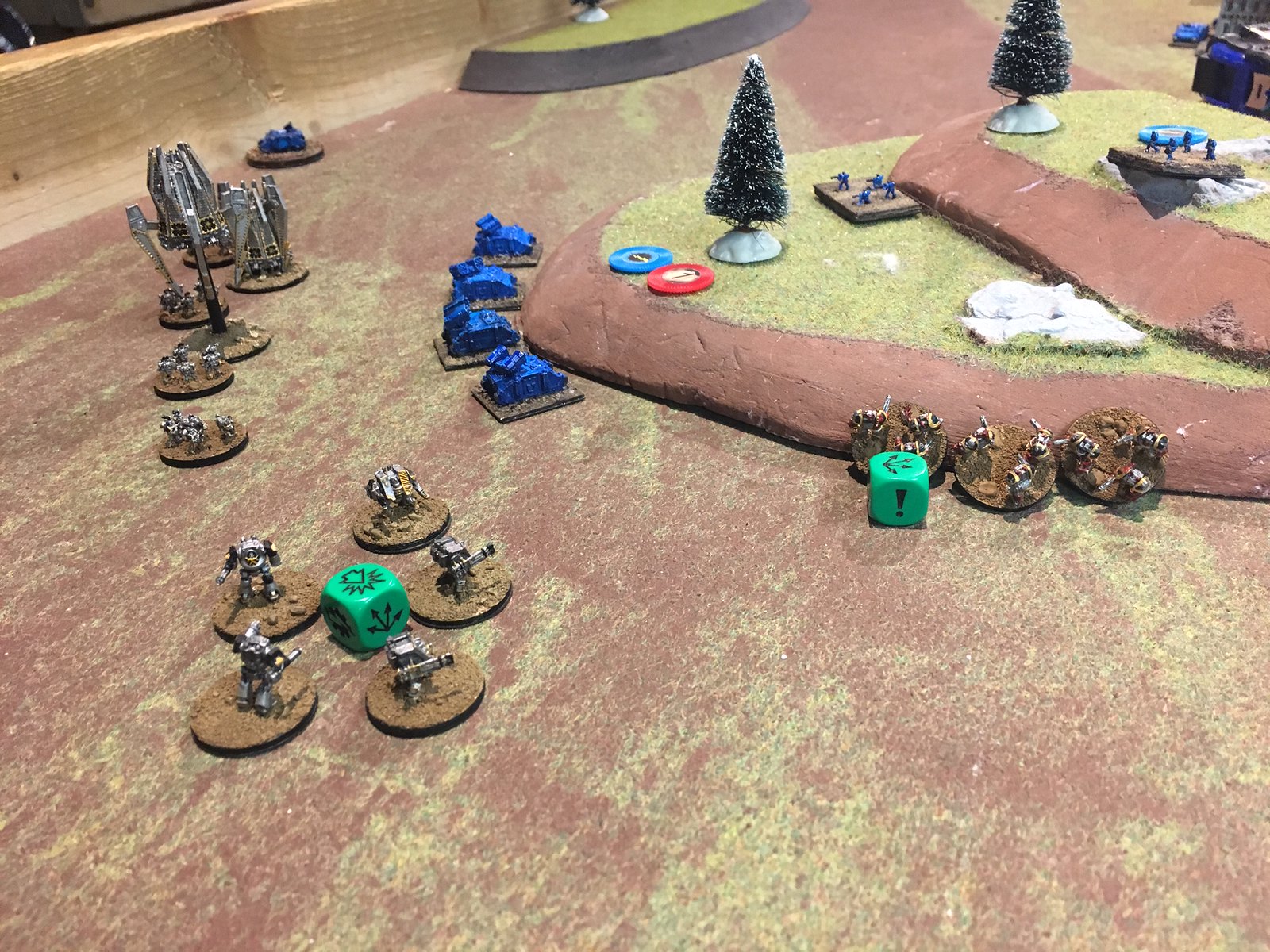 At this point, the Scouts holding the far right T&H objective mounted up to shore up their now-battered center, doubling over to contest the Blitz and taking the Chosen under fire for a blast marker.  The Chosen promptly engaged the Whirlwinds, killing one and knocking out another through hackdowns, breaking them.  Responding to the developing shitstorm in the middle of their lines, the Marines dropped their first Terminator formation, air assaulting the Chosen and wiping them out to a man. 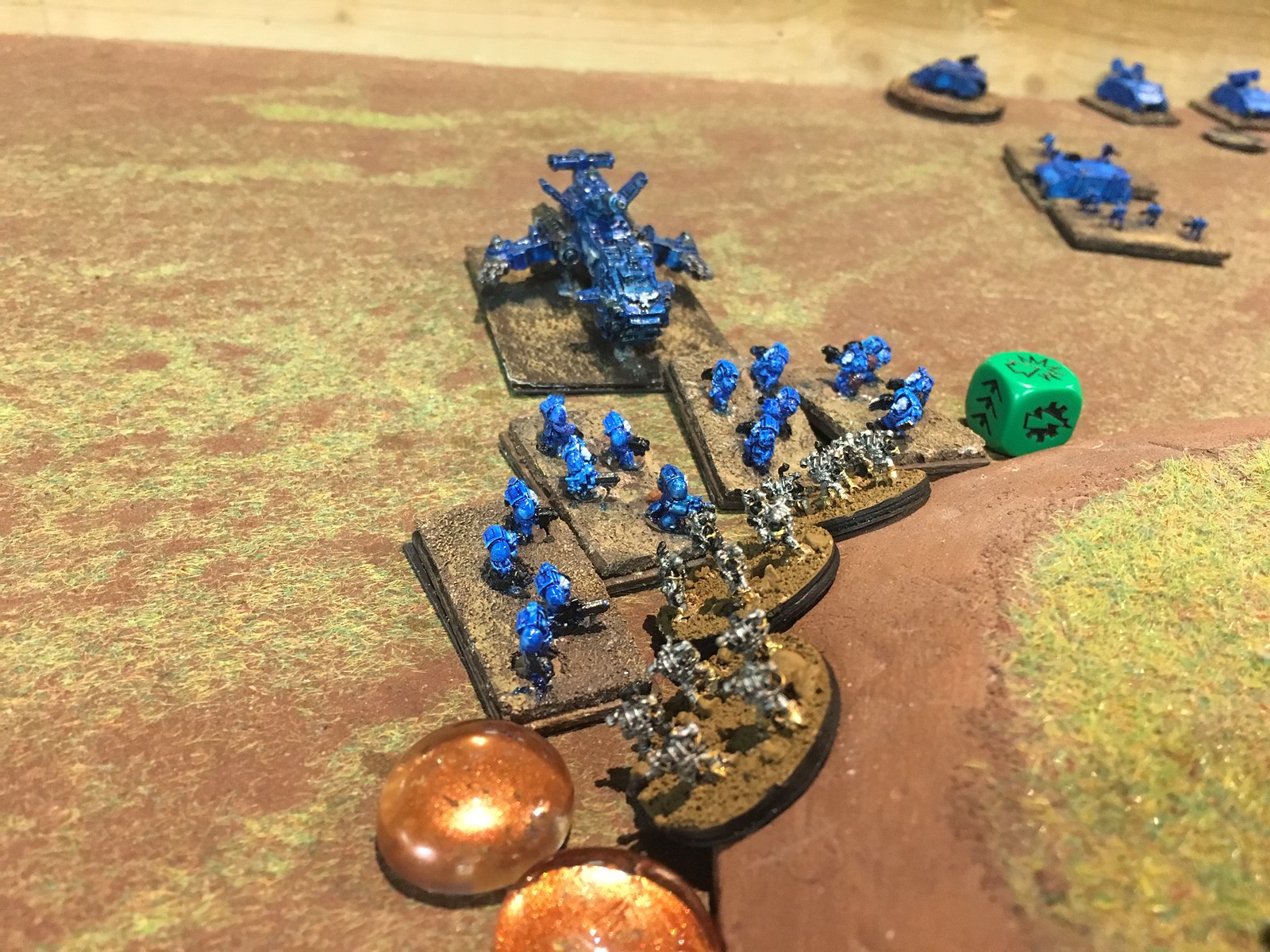 Finally, the empty Thunderhawk landed and fired on the Dreadnoughts (just a blast marker), while the second Thunderhawk loaded with Terminators stood down.

At the end of the turn, the Obliterators rallied and the Dreadnoughts shed their blast marker, while the victorious Terminators changed rides and took off in the previously-empty Thunderhawk.  One Thunderbolt was knocked out by AA fire on its way off the board, and the Whirlwinds (sitting on the Marines' Blitz) failed to rally.

The Iron Warriors retook the initiative.  Forgive me, but it was getting late and I forgot to take a photo of the board at the start of Turn Three.

The third turn kicked off with a bang, both Iron Warriors Basilisk batteries pouring fire into the Scouts on the Blitz - the first battery claiming 2 squads and a rhino, and the second battery claiming 2 more squads, breaking the formation.  In retaliation, the Land Speeders advanced and poured fire into the Defilers, killing three(!) and breaking them, sending them scurrying onto the abandoned right-hand T&H objective.  My vote for game MVP there. 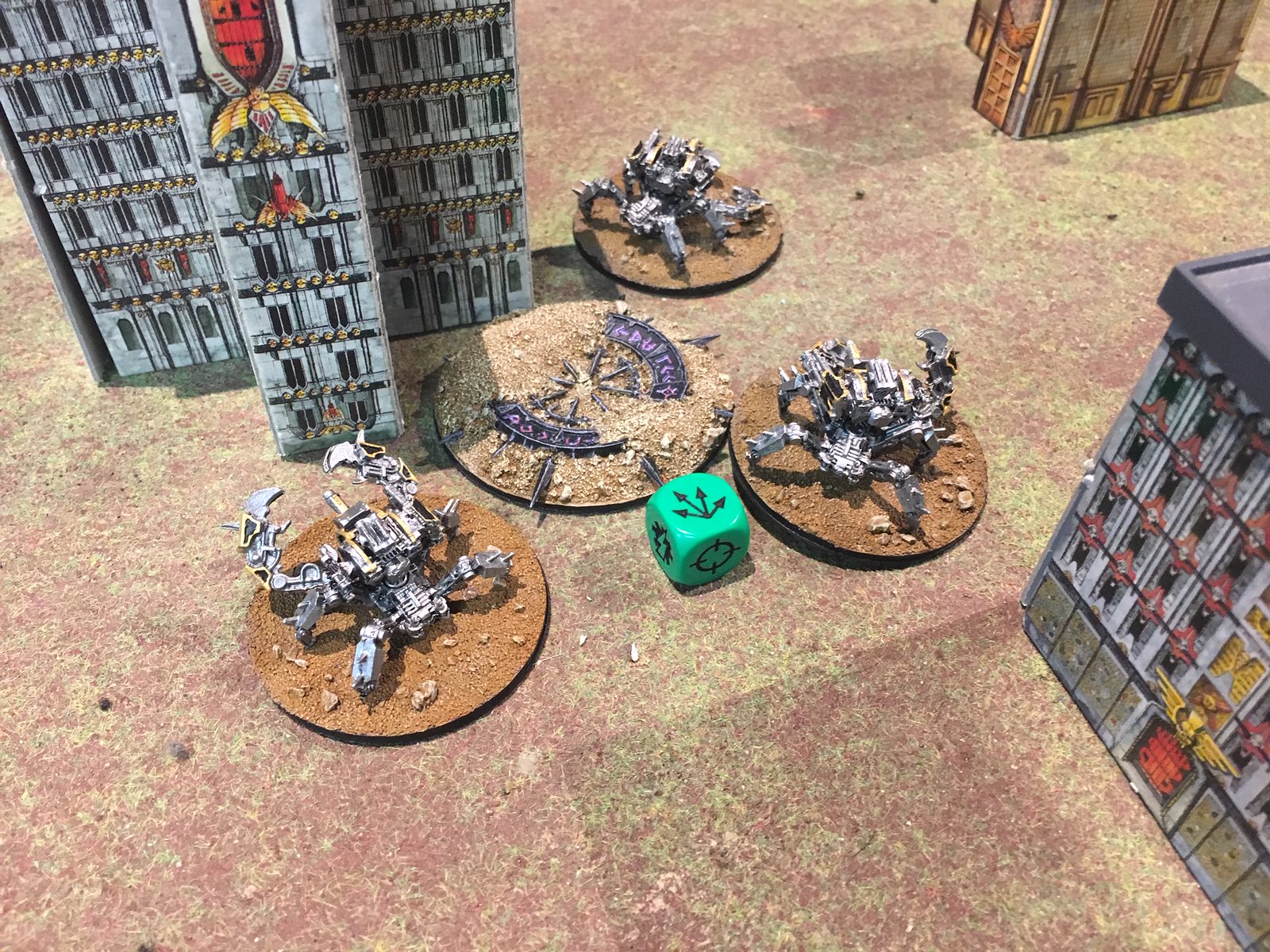 The Obliterators went over the top of the wooded hill to engage the Scouts pinning them down, killing two in the firefight and breaking them.

In retaliation, a formation of Terminators in a Thunderhawk air-assaulted the Dreadnoughts, killing three. 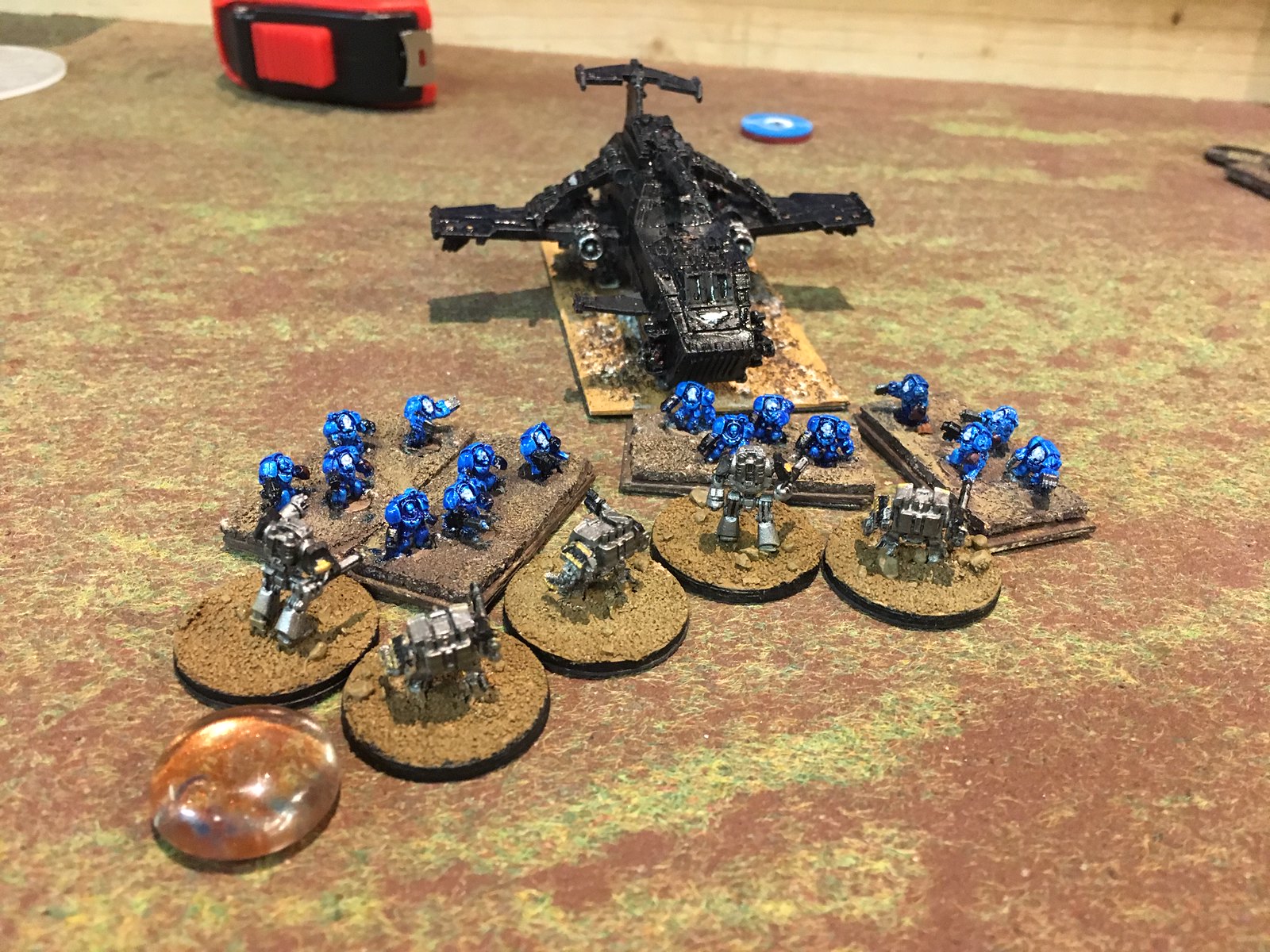 First, the empty Thunderhawk made a ground attack against the Warsmith's Company, inflicting a blast marker.  While the remaining Thunderbolt failed to activate, the second Terminator formation made a crushing air assault, wiping out 10 Iron Warriors Squads and Rhinos and breaking the Warsmith's Company (BTS). 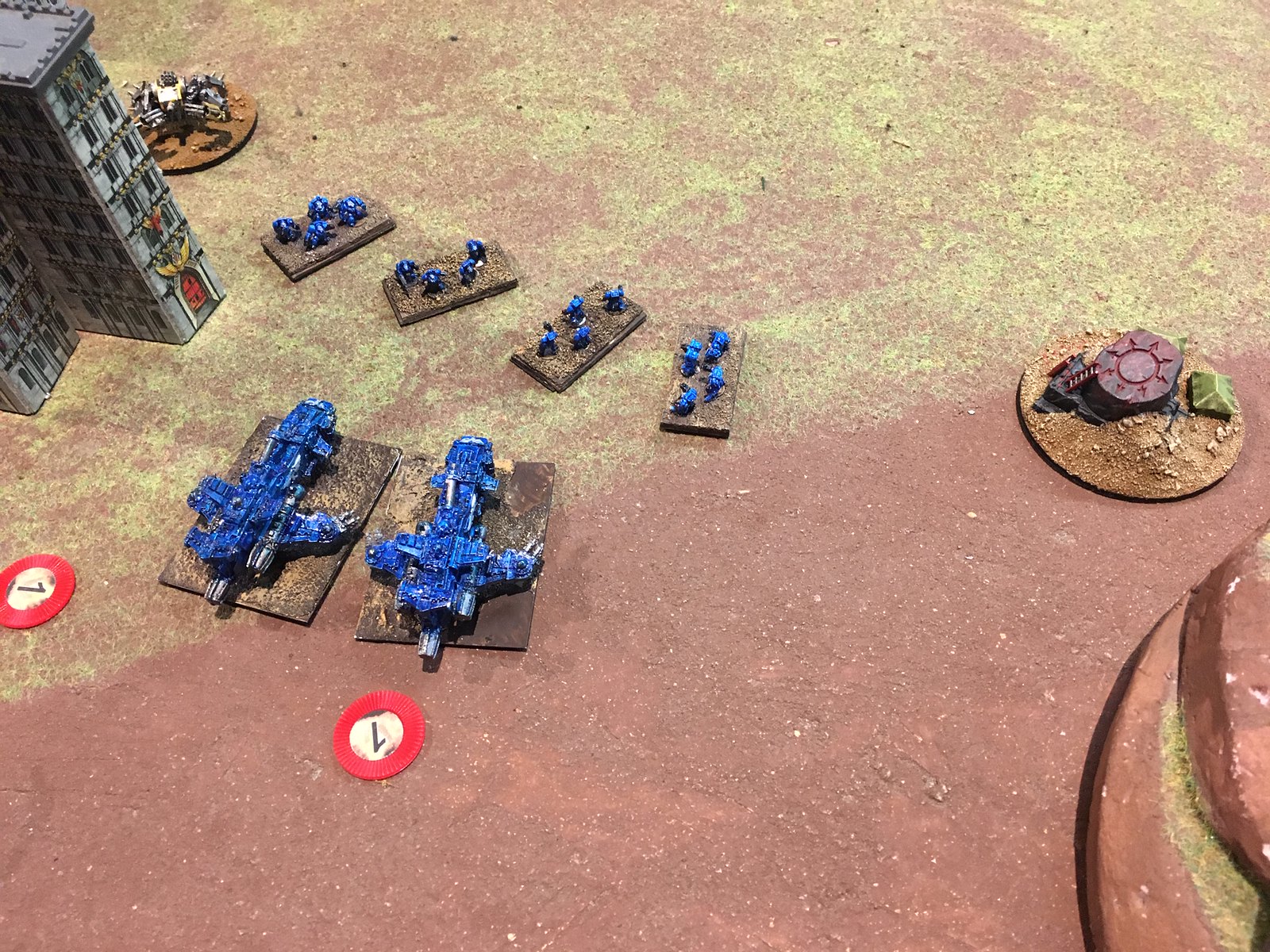 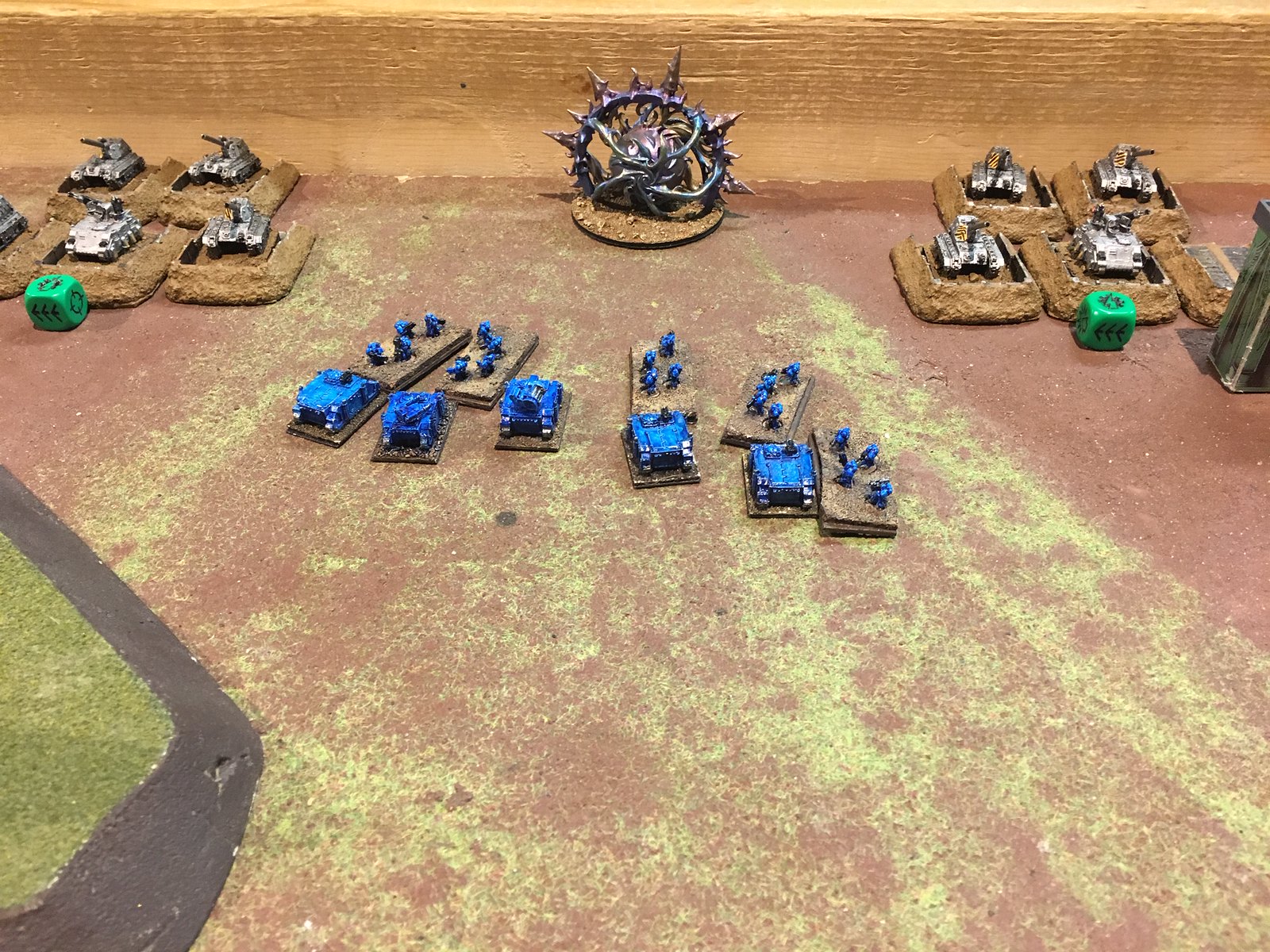 Not the safest place to park your Rhinos...

At the end of the turn, the Obliterators and Defilers rallied, while the Dreadnoughts failed to.  For the Marines, the Whirlwinds and the remnants of both Scout formations rallied.


At the end of the game, both Iron Warriors and Marines had BTS, and nothing else.  We called it after Turn Three due to time and went to points.  After tallying the carnage, the Iron Warriors came out ahead 913 - 828 in kill points.  Given how close the score was, we called it a draw.

Brutal, bloody, and savage, Rob and I threw some nasty engagements at each other.  Had it gone to a fourth turn, I think the Marines probably would have won on account of Thunderhawk mobility and the largely untouched Terminator formations, which probably would have cleaned up whatever I had left holding objectives.  Still, not bad for some Tuesday night Epic!
Battle Report Chaos E:A Epic Epic: Armageddon Iron Warriors Space Marines