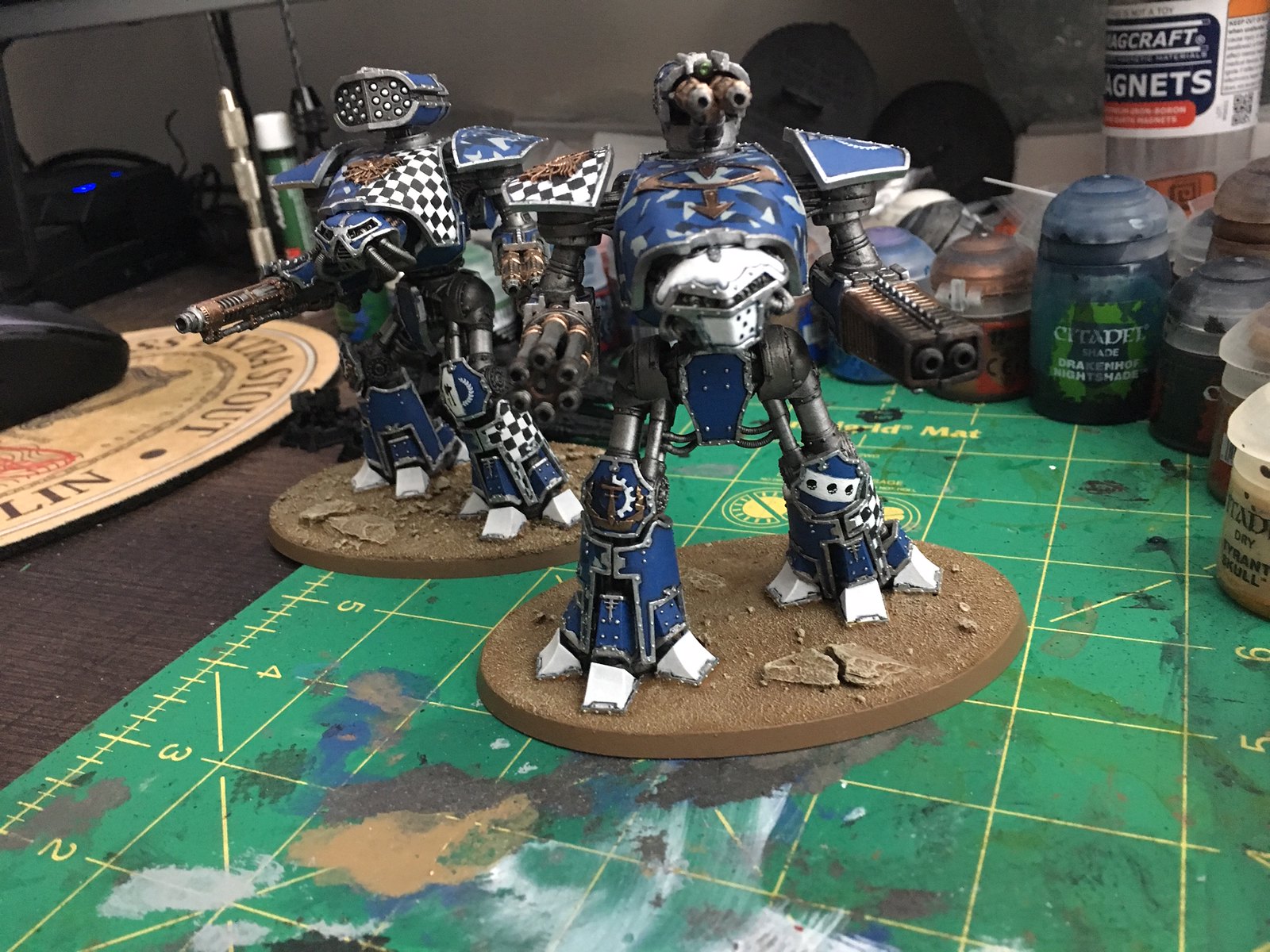 So I've been on a bit of a roll lately when it comes to painting...

This brings me up to 2 Reavers, 3 Warhounds, 4 Cerastus Lancers, and 2 Acastus Porphyrion.  While I was at it, I also painted up another Gatling Blaster, Apocalypse Missile Launcher, and my Warhounds' 3 Inferno Guns to round out their arsenal.  Next up are my Battlefield Assets (finally),  another Melta Cannon, Volcano Cannon, Carapace Turbolaser, and a Warp Missile Rack (excited for this one!).

After that I have my first Warlord to paint, as well as 6 more Questoris Knights.  They might get split up into two batches to fit in a second Warlord and a fourth Warhound though.  I'd like to be able to field literally any maniple, if not any two maniples...

After that I'll need to take a break from Tempestus for a while.  I have more Shieldbash on the way; Josh Qualtieri / "ZombieSmith" just released a few new model packs for all six factions and I picked up some stuff for three of them.  I also need to get my Warmaster Chaos army painted for Fall In! in November.  1500-2000 points of skin is going to wear on me a little, but after spending so much time on big models (big yes, though 8mm scale), it might be fun to be able to break out the drybrush for the 10mm scale stuff for a bit.

At any rate, here's a few more shots of the new Reaver.  As before, all weapon hardpoints are magnetized, so I can swap these two guys out at a whim. 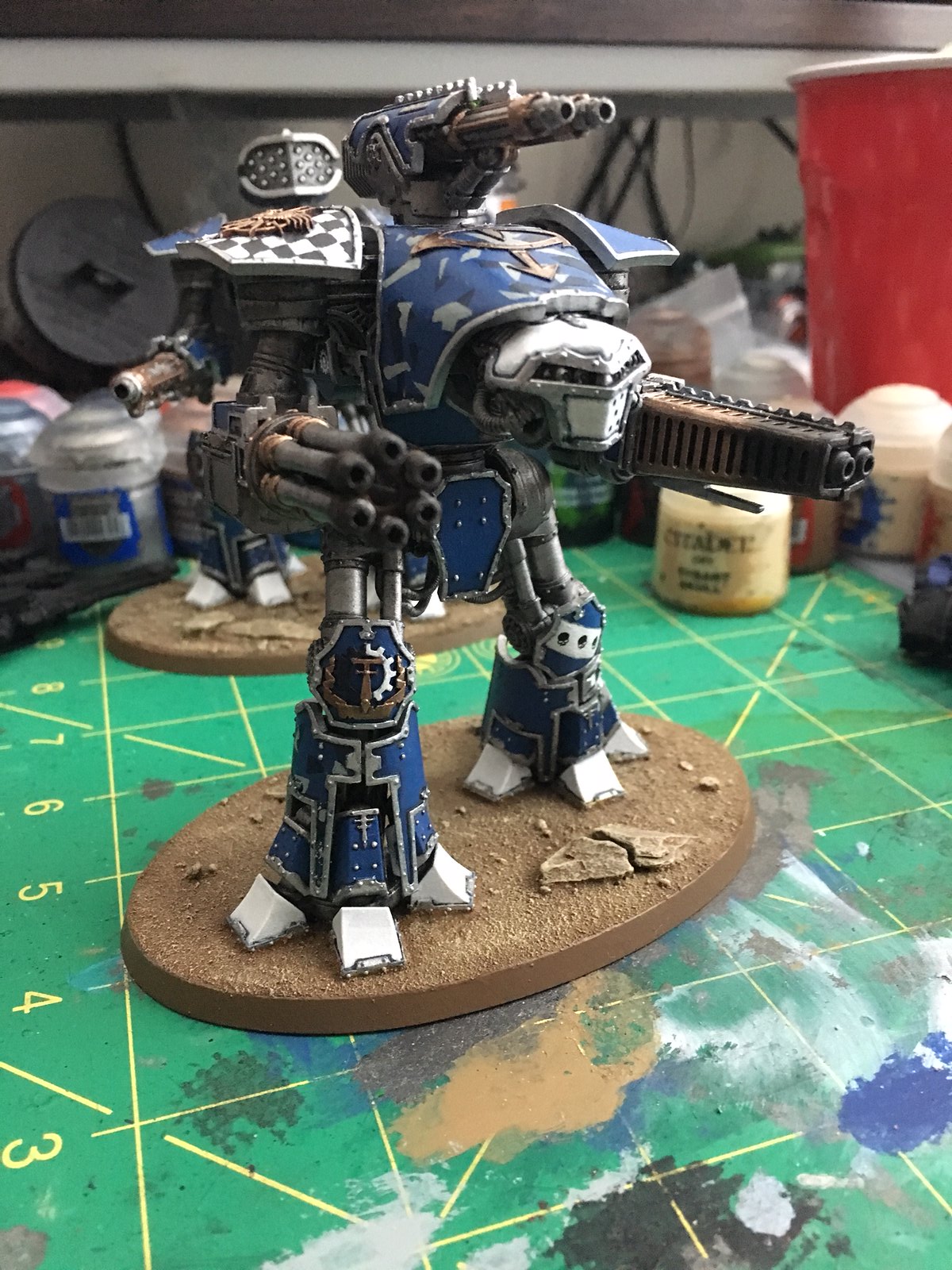 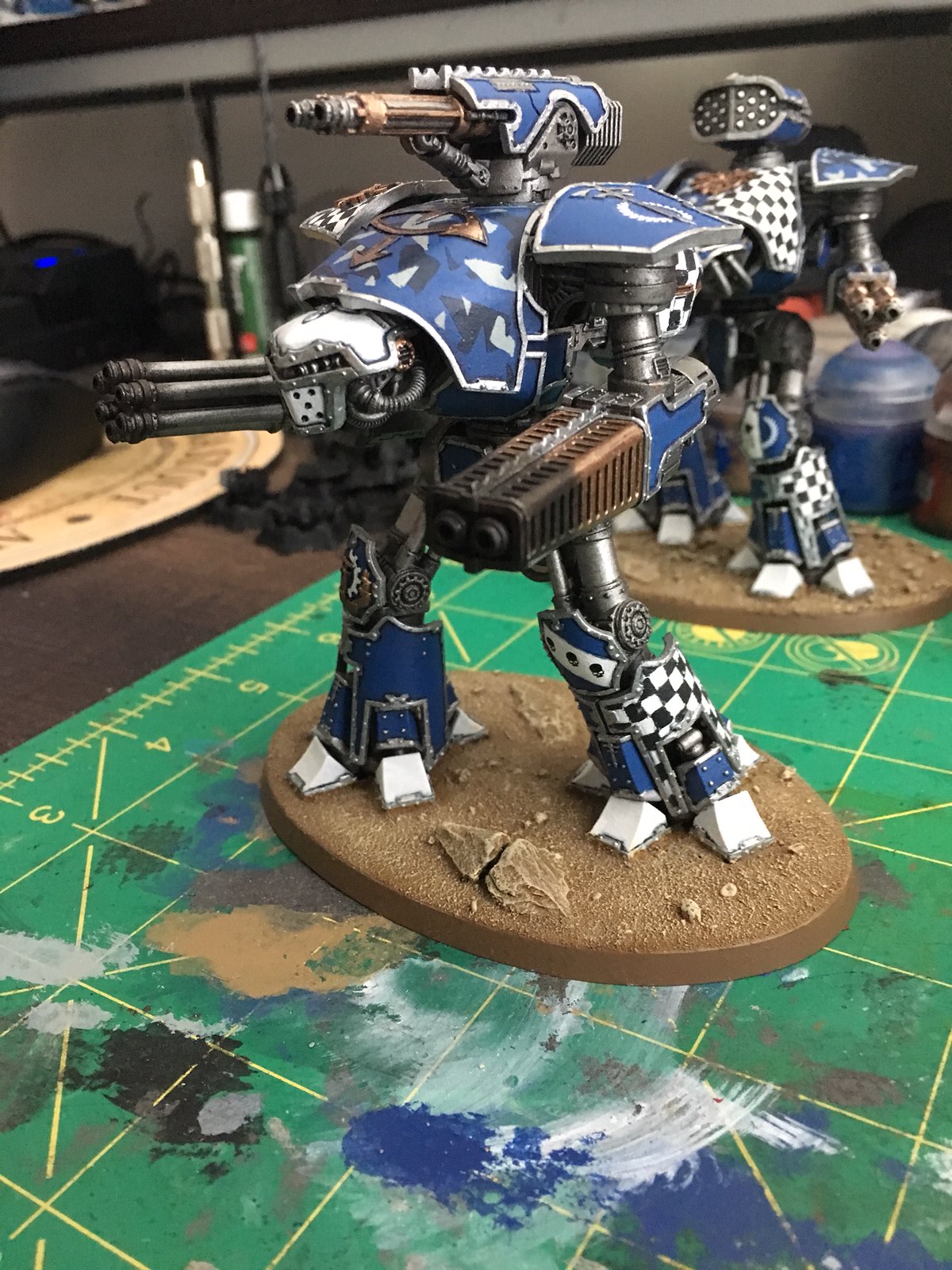 Some critiques - the camo feels a little thinner than intended on the carapace, and checkers are still a bear, and the thigh armor isn't quite aligned as nicely as I'd want (it may not look it, but I really pushed the limits of what the kit's poseability permits), but for tabletop gaming it'll do.  Left pauldron feels a little plain, mostly because the "T" doesn't take up as much real estate as the Eye of Horus on the other Reaver, so it might get an extra decal in the front corner, maybe.  Definitely learning a lot as I go though.

At this point I have 4 heads painted up for the Reavers - two of the more ornate designs (those have been up in past photos), and two of the more traditional design (ref:  28mm kit).  The more ornate designs "feel" more heavily armored, so I might use them on the Reaver(s) in each maniple meant to close with the enemy, and use the more traditional head on the stand-off platforms where the more exposed targeting arrays are less of a liability.  It makes sense, trust me.