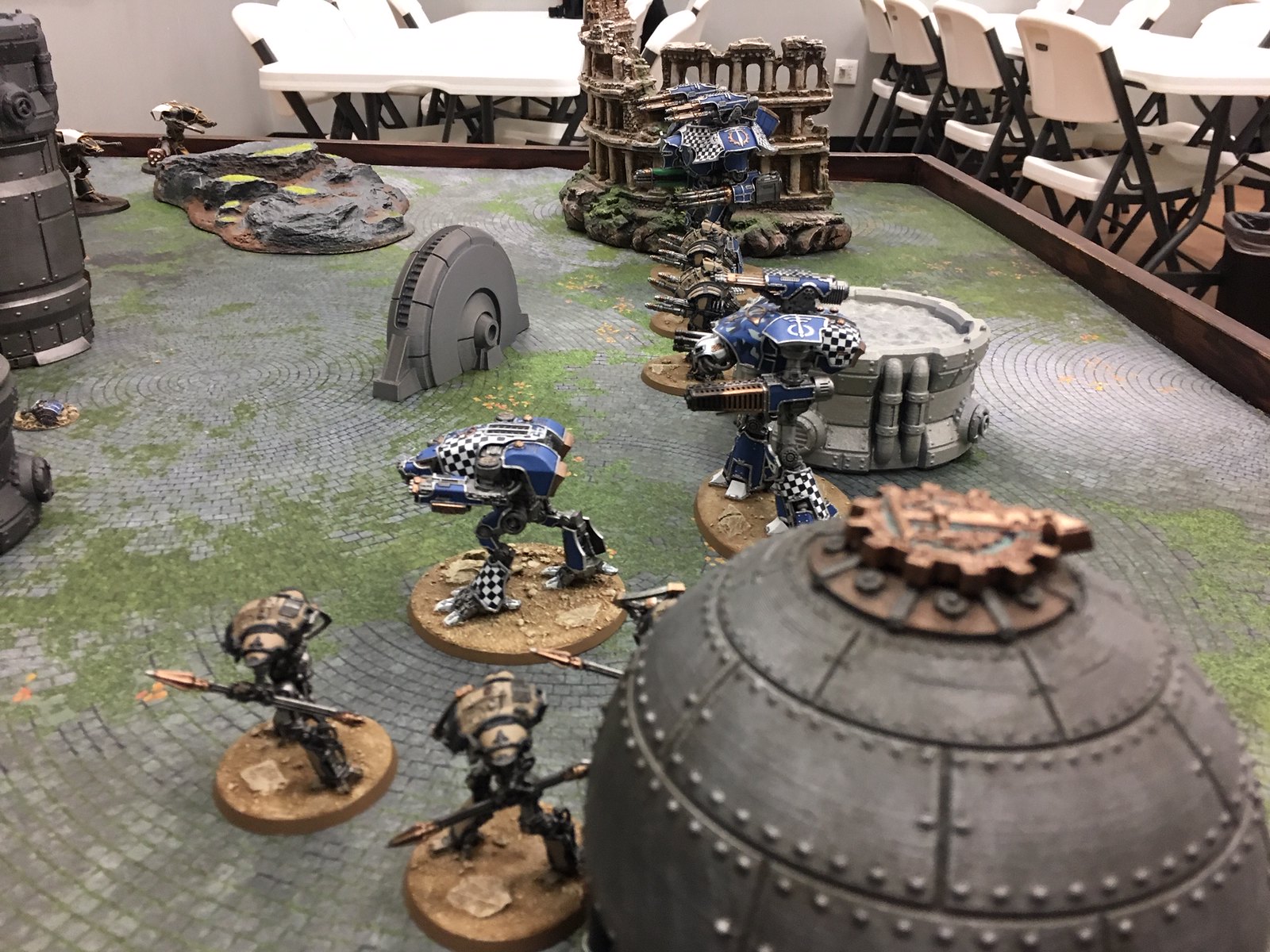 So I spent last week fighting off a head cold and racing a deadline at work, and man did that suck.  It's probably a good thing I didn't put myself forward for the US team for the Epic:  Armageddon World Championship, because with both of those things happening there's no way I would have made the trip.  But kharma has a way of re-balancing, and I managed to get three (3!) games of Adeptus Titanicus in this weekend.  Only have photos for two of them, but in my defense, game #2 was a 750 slugfest that we knocked out in an hour and a half before I had to run home and let the dog out. 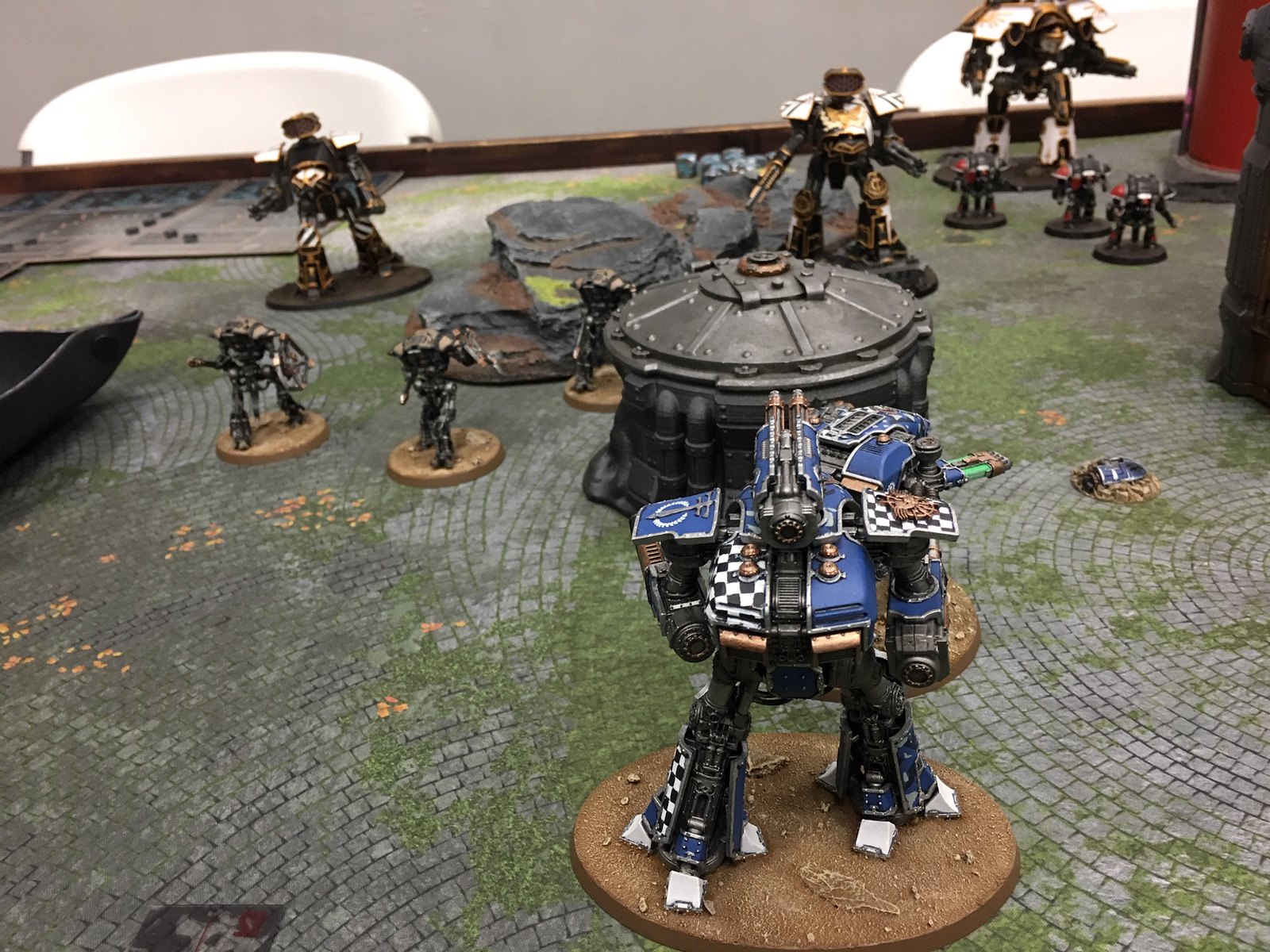 Oh this was fun.  I opted for an Axiom maniple, running with 1 Warlord, 1 Reaver, and 2 Warhounds, supported by a pair of Acastus Porphyrion and a trio of Cerastus Lancers (to be fair, I asked first whether or not running Acastus would be ok).  The Warlord was rocking a pair of laser blasters, a macro gatling blaster, and a sunfury plasma cannon, while the Reaver sported a melta cannon, gatling blaster, and turbolaser, and the Warhounds run vulcan/plasma combos.  Standard stuff, except most people don't seem to build Warlords up as midfield brawlers like that - more on that later.

My opponent ran a Ferrox maniple (2 Reavers, 2 Warhounds), backed up by a quartet of Questoris Knights and a non-maniple Warlord.  TBH, he might have been better off running an Axiom (lots of failed orders), but he was leaning in on the two Reavers with missile pods, gatling blasters, and chainfist/power fist.  Still, missiles & belicosa volcano cannons are no joke.  Warhounds were both dual inferno guns... and honestly I'm still really underwhelmed by that weapon system.  It's probably overcosted by 10 points per gun, because honestly they did very little all game.

What really won this for me was the Scatterable Mines stratagem - setting up a 24" diameter bubble of dangerous terrain every turn allowed me to really screw up the Reavers or the Warhounds as needed, limiting their mobility and allowing me to maneuver more freely.  Since my Mission Objective was "Retrieval" - shutting him down so I could rush up on the downed Warlord crew, grab them & boogie, was crucial. 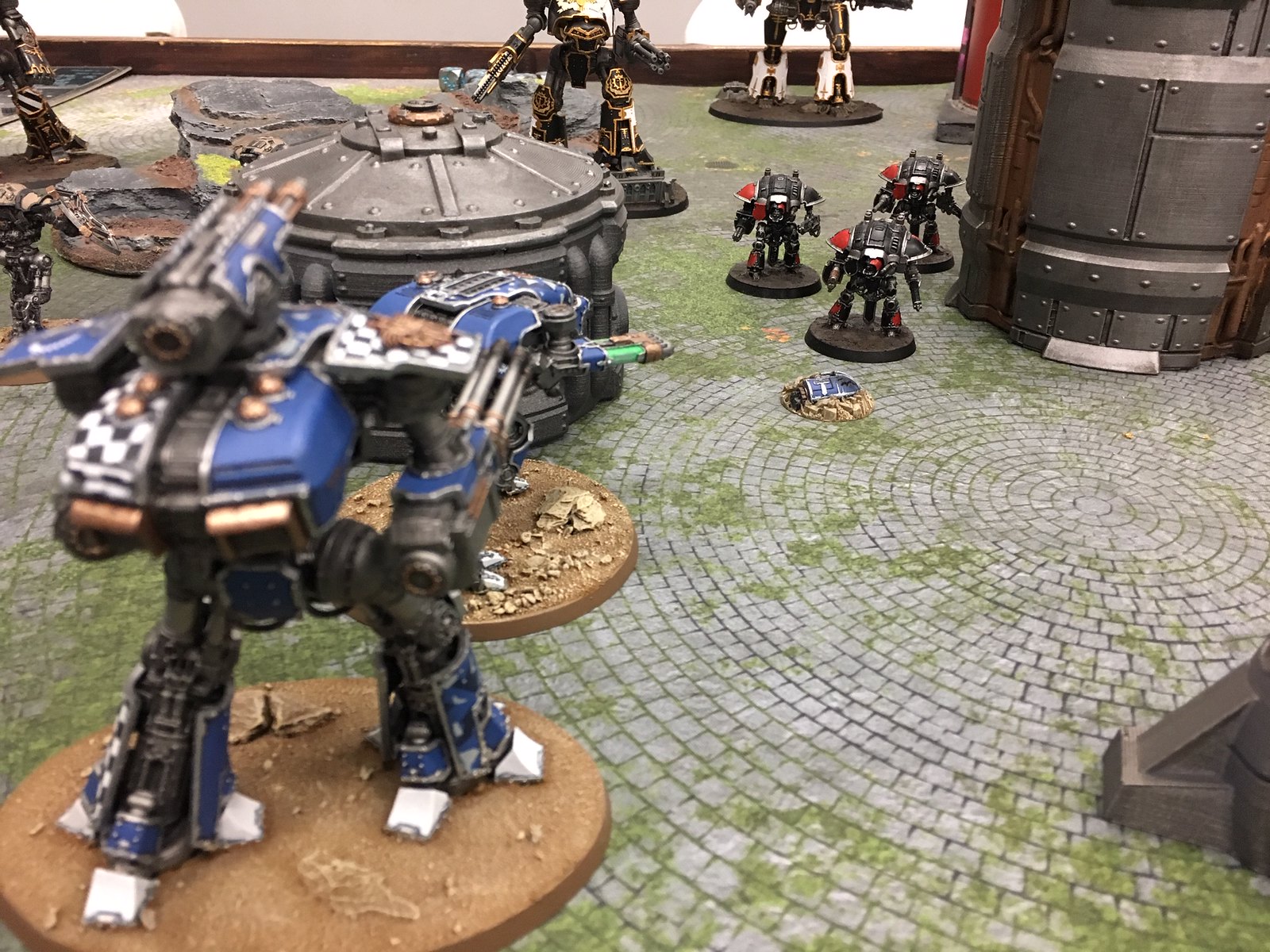 Also, nothing says "you're gonna die" like getting bracketed by a midfield control dakka Warlord... 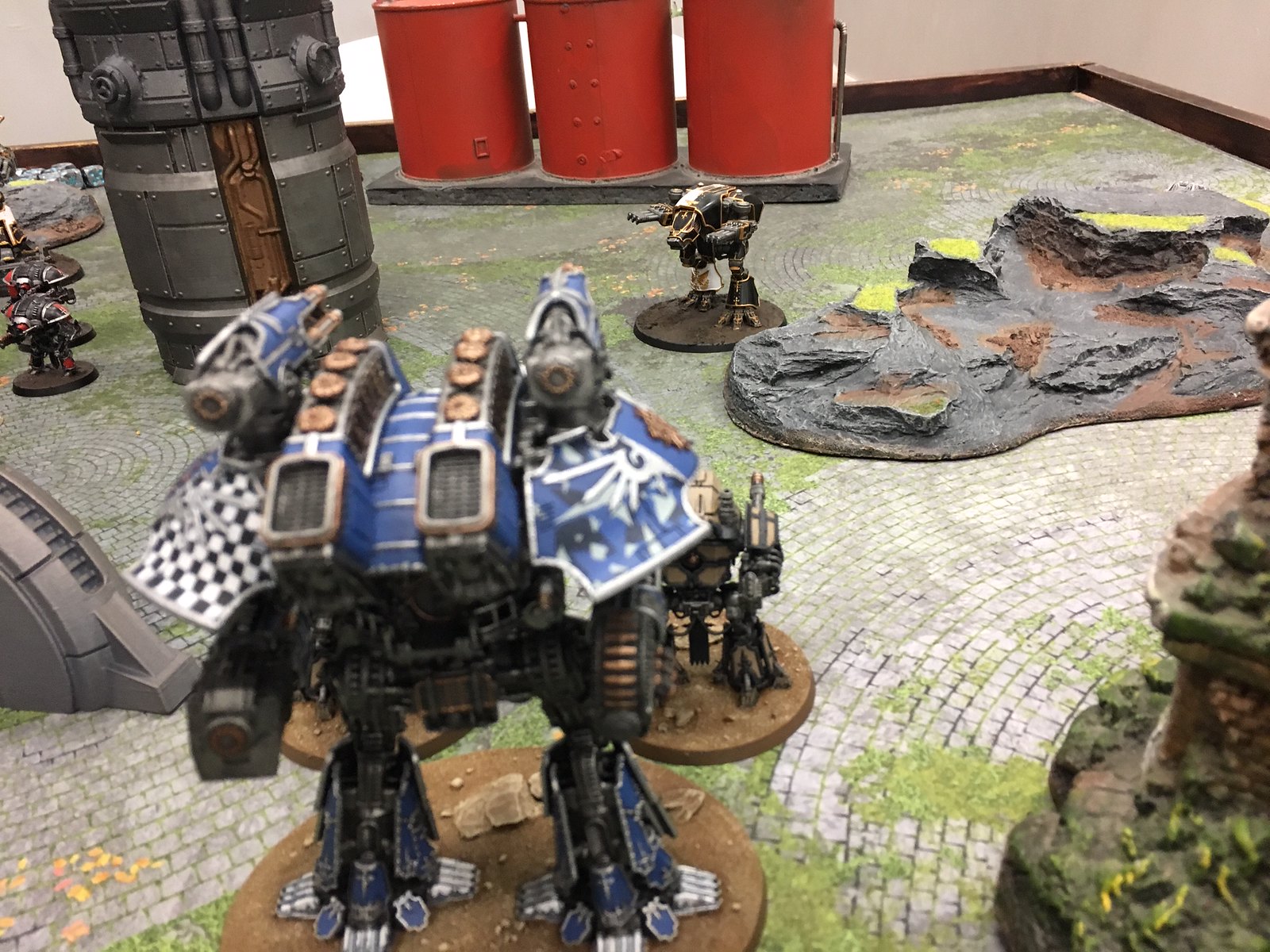 I thought I was going to be running Missile/Volcano Cannon/Quake Cannon Warlords a lot as the big gun platform, but damn this guy can make Titans disappear. 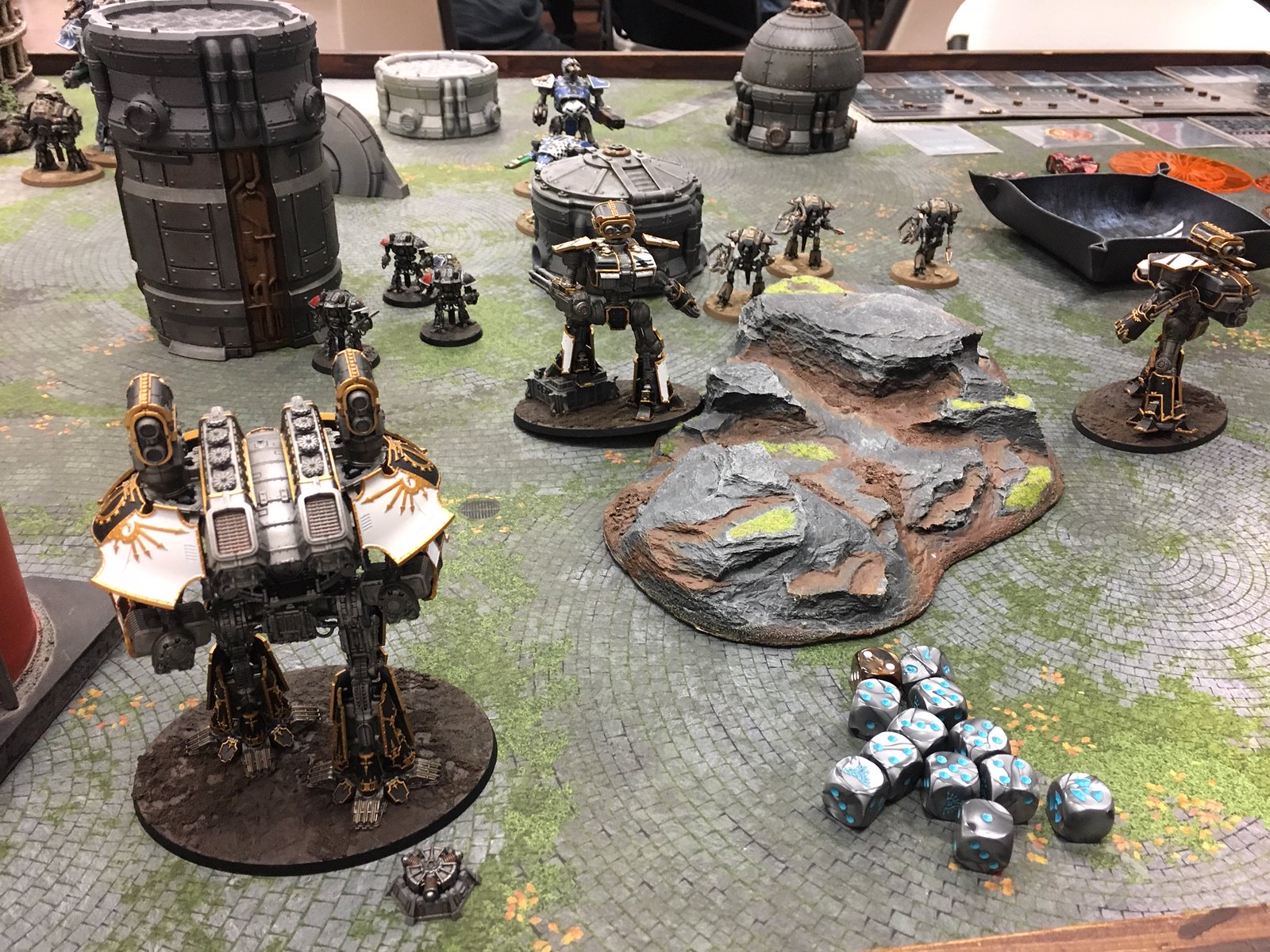 Props to Brooks; his dual Belicosa Warlord did some serious work, and I'm pretty sure that by the end of the game it had accounted for all three Cerastus, one of the Acastus, and my Reaver, so yeah, 2x  12 damage 5" pieplates is monstrous, especially when you're camped out on a plasma relay, but that massive cooling stack in the middle of the board allowed me to play for cover and keep the heat off my Warlord and the Warhounds.  It didn't help that he spent two turns dumping low-strength fire into the Cerastus, which laughed it all off on a 2+ save.  Moral of the story:  balanced firepower builds are key, even on close combat Titans. 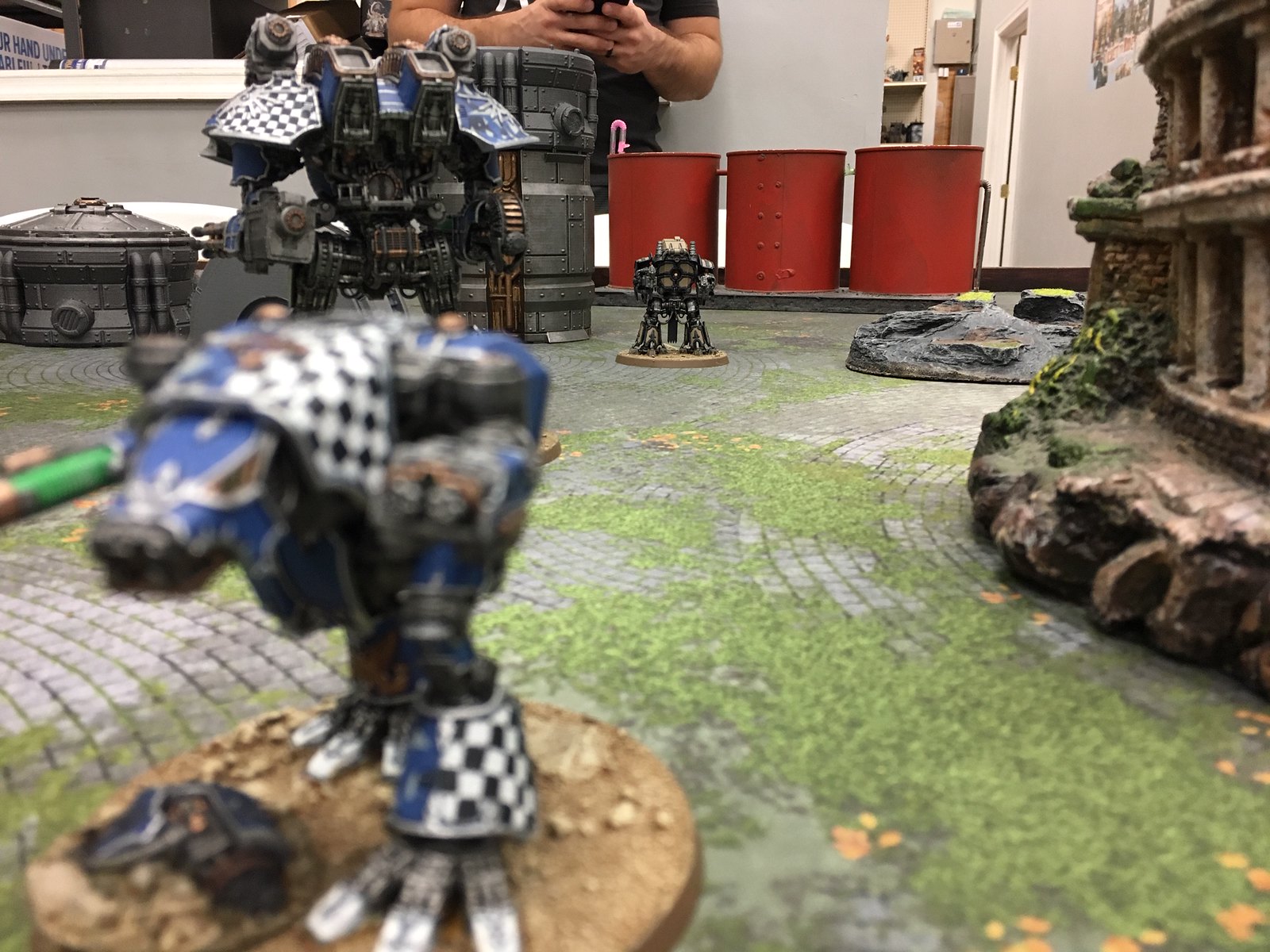 For this, I took A Venator Maniple.  The Reaver had a warp missile, volcano cannon, and laser Blaster, and my two Warhounds had vulcans and turbolasers.  The stratagem this time was the haywire barrage, which gives you a chance to crit all Titans near where it lands.  Definitely messing around with that in the future.  The warp missile missed (boo!), and I wound up with defeat in detail despite killing two Warhounds, because 4x plasma blast guns hitting at strength 12 on maximal, and making lots and lots of shield saves (I mean seriously, good on him) means you're going to win.  My mission objective was "Hold the Line" and his was "Glory & Honor" which he scored in Turn 3.  At the end, it was only 13 - 11 though (kill + board control vs. 2 kills and 5 points for the first 12" of my hold zone), so even then it was a pretty close thing once I sorta recovered. 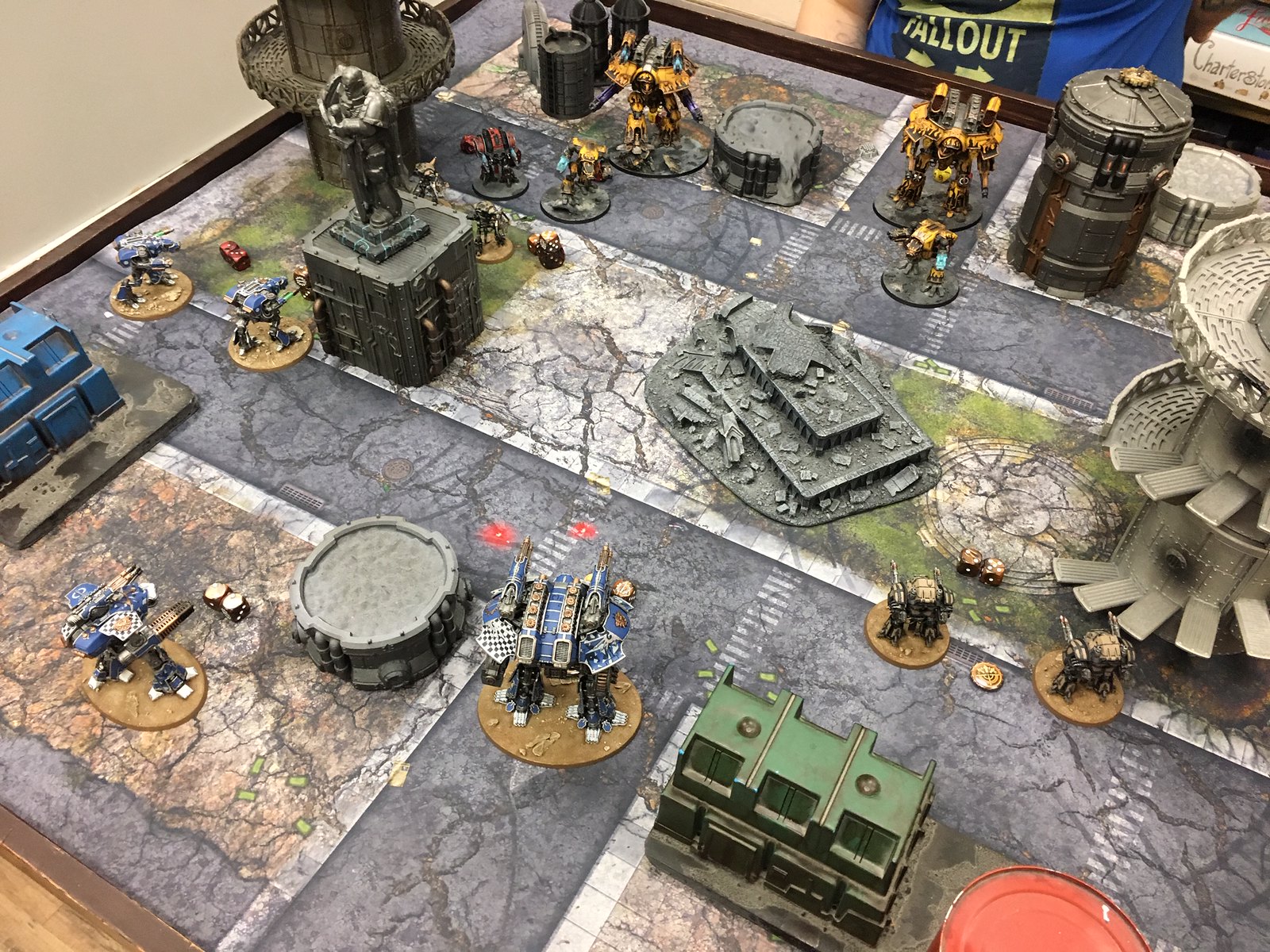 Sunday's game saw me wrap out my "Summer" Adeptus Titanicus league at 4-2.  I took the same maniple I'd fielded against Crucius the previous day, and my opponent took a Regia maniple (2 Warlords and 2 Warhounds in this case), supported by one Acastus Porphyrion.  Warlords & Warhounds were WYSIWYG as above.  I ran with the same stratagem setup as well - Vox Blackout, Scatterable Mines, and Ablative Plating.  My mission objective wound up being "Engage & Destroy" and I think he took "Hold The Line" but it was moot, as Turn 4 ended with a tabling. 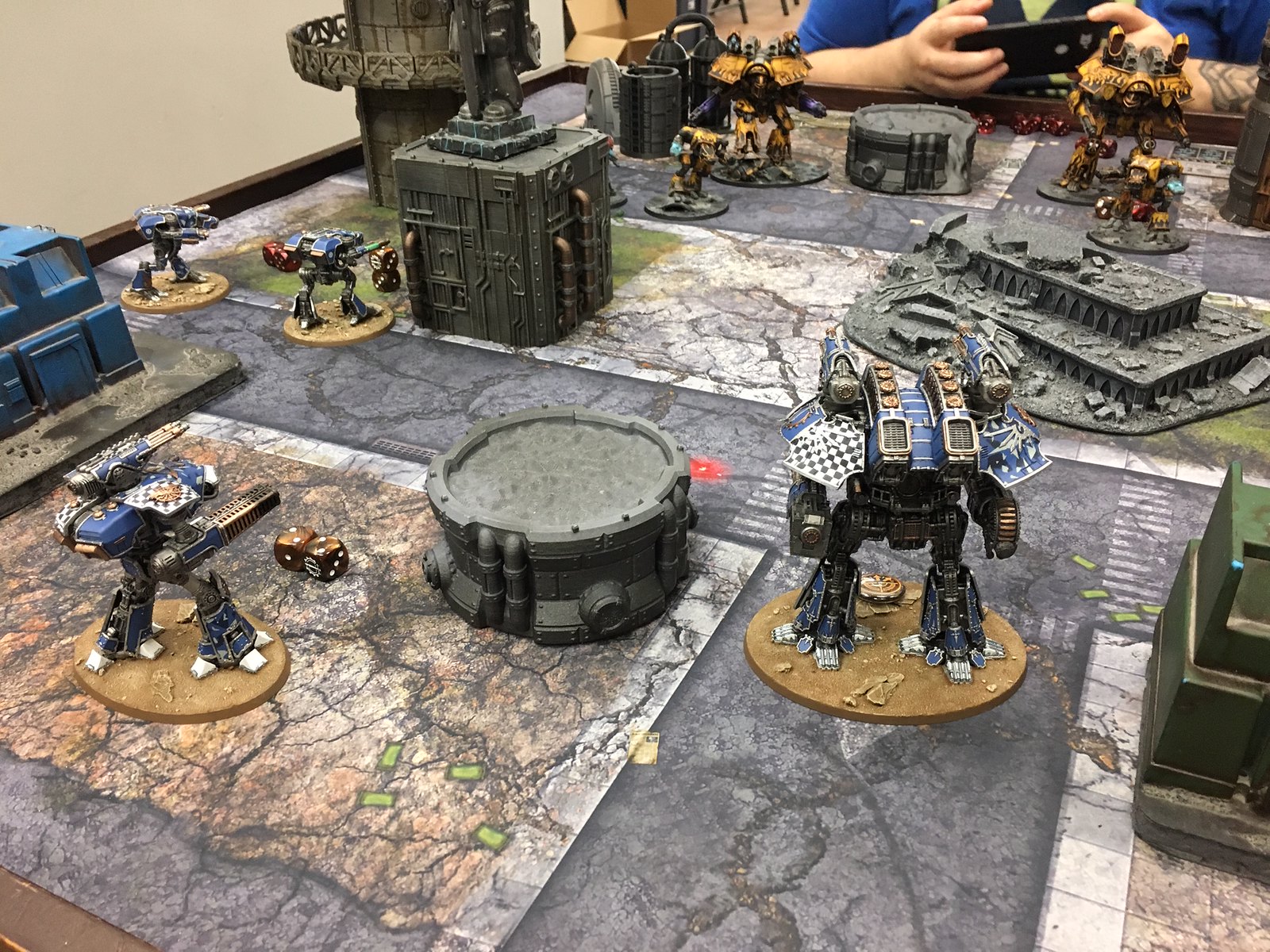 This was fun.  Serious fun.  We played using hostile battlefield rules, and Beta-Garmon III, so we fought in the middle of a hurricane with random visibility distances for each titan and random lightning strikes.  Fureans' hunting auspexes pretty much meant cover was useless for me, so I opted to just bull my way up the board, focus-fire and burn down his Titans.  Balls to the walls worked - in the end, sheer focused firepower carried the day, helped along by excessive reactor pushes in an attempt to soak all that fire. 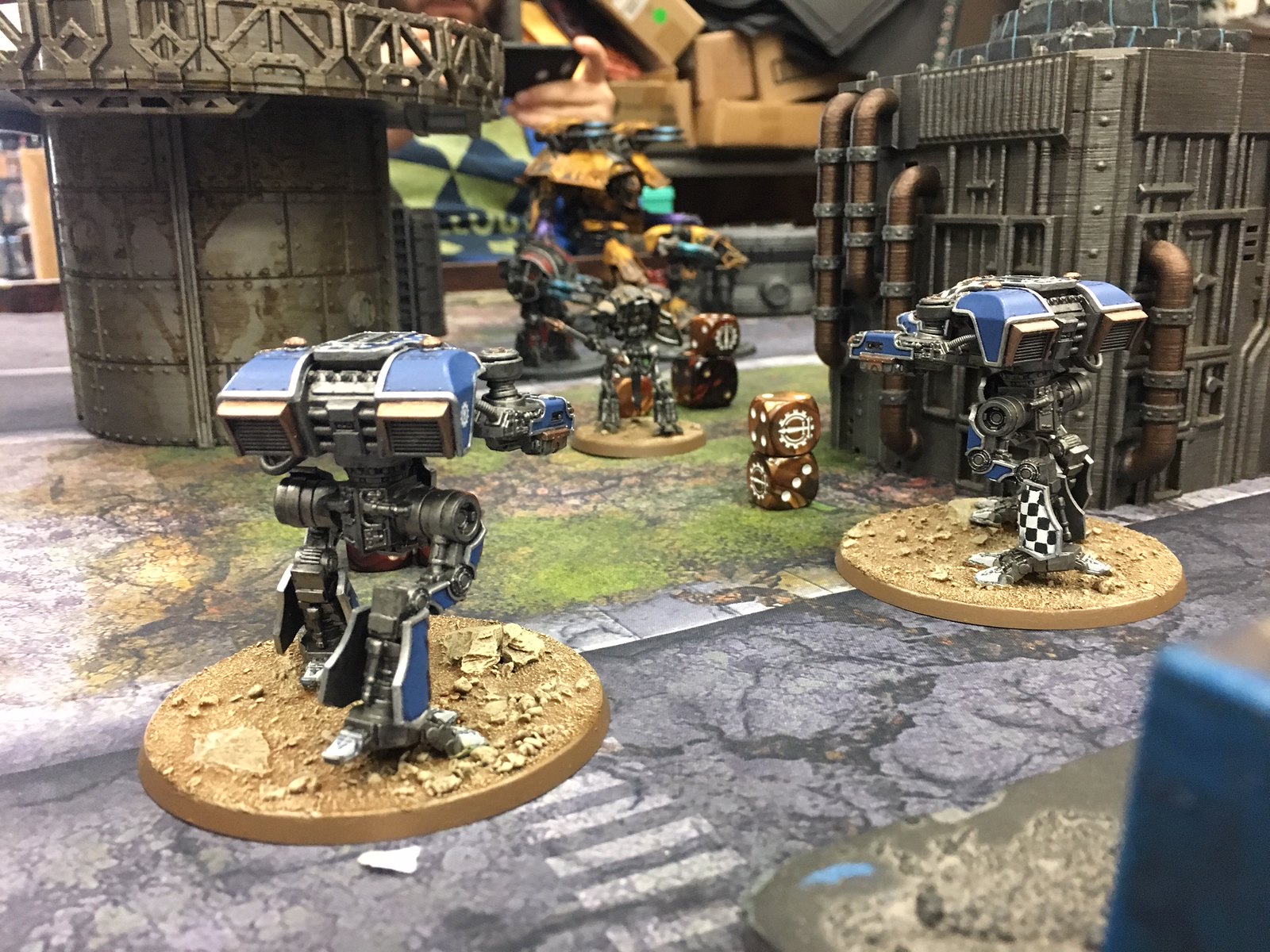 It is extremely hard to kill a Warhound that's sharing shields with a Warlord.  However, it is extremely easy to kill a Warlord that's lost all of its shields and has pushed its reactor into the orange for several turns running.  My Acastus and Cerastus Knights did what they were supposed to - I got a little shooting out of them, but mostly they soaked fire for the Titans, who did exactly what they wanted to.

First the Warhound on my left went down, followed swiftly by the Warlord on that side as well when my Warlord died.  My Princeps Senioris passed his command check, so my Legion trait kicked in and I managed to dump all three weapons systems in targeted body shots, ripping his Warlord wide open.  THEN my plasma reactor melted down, killing his second Warhound with the blast. 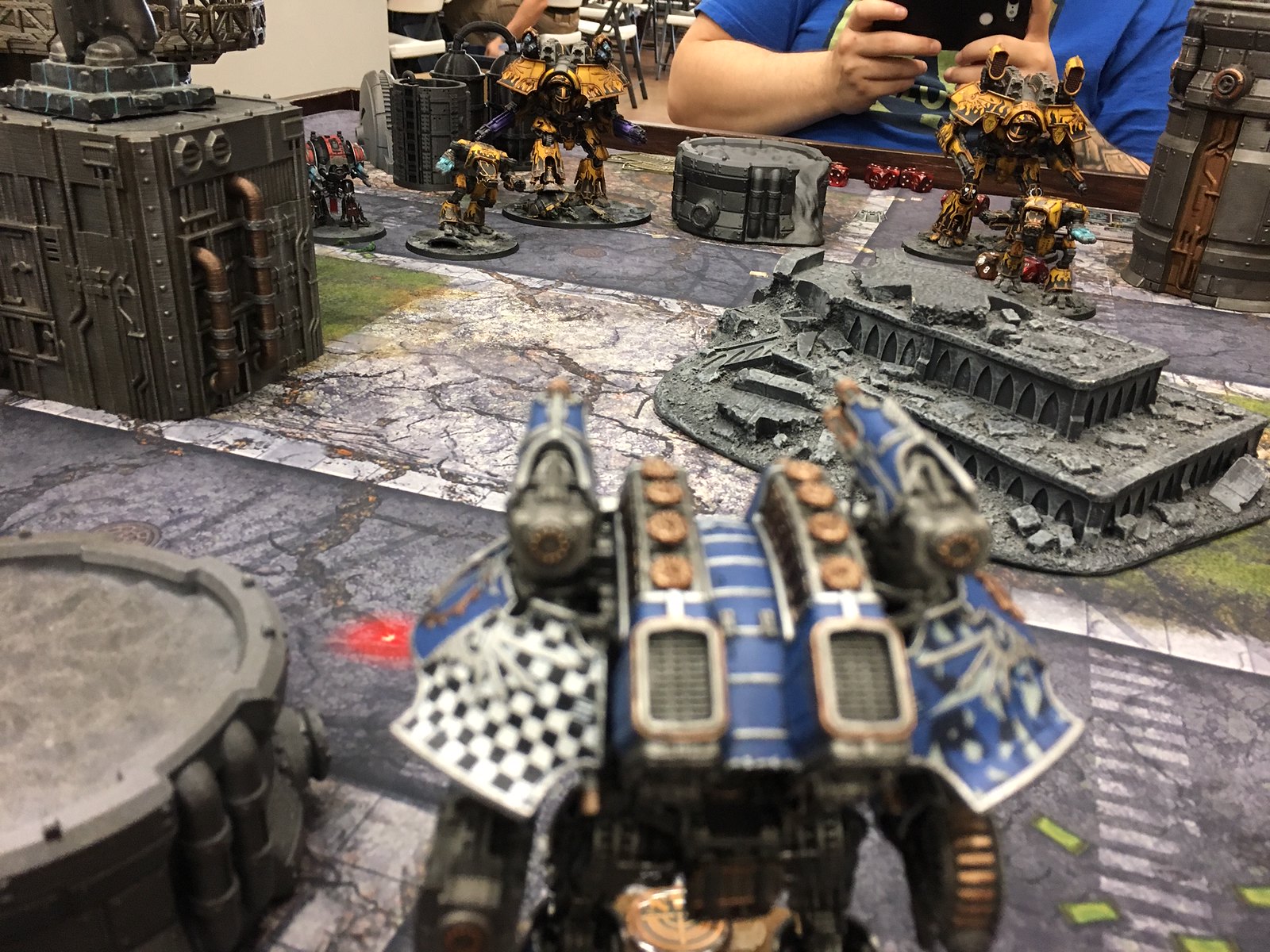 In the end, his second Warlord died trying to defend himself from my Warhounds - an unlucky reactor push with a shot up torso resulted in him going off the reactor track - and the automatic body hit was an overkill crit that saw his Warlord fall.  If that hadn't done it (trying to soak the first vulcan salvo), the maximal plasma blastgun salvoes probably would have though, and when the smoke cleared, my Reaver and Warhounds stood victorious.

Overall, I spent a great weekend gaming, and I'd totally do it all again if I could (even if it meant I didn't get much painting done).  My opponents were both great guys, and I learned a heck of a lot out of these fights (redundancy & volume of fire outweigh single big-hit attacks), so it was an excellent weekend.