October 10, 2019
So the past week has been project cleanup to get (most of) the little held-over side projects cleaned up before I pack up my Warmaster Chaos force and paints and take it up to CT for 2 weeks of final audit prep and full-on USG audit, because when I finally get home and back from the gym, I'd rather spend two hours painting than watching TV or getting mad at the internet.  Plus, at least it'll feel like I'm accomplishing SOMETHING during that time.

So yeah, I'll be packing about a gallon of paint up to CT with me in order to do all the red-laquered armor, bronze trim, chainmail & blades, skin tones, bone horns, etc., and leave finishing off all the bases until I'm back down for 2 weeks before Fall In! (fingers crossed that works out as intended...).

After Fall In!, I'm going to finish the other four primed Titans for Tempestus, and then seriously knock out a pair of warbands for Shieldbash.  It's about time I did that.  May also do a small force for Legio Krytos as an OpFor/training demo force (instead of Fortidus... for now).  After that, it'll be demons for my Epic CSMs, and then either a Traitor LatD force or Imperial Guard.  It's about time someone fought something other than Iron Warriors and AMTL in Epic.  Have to check with Dave on how some of my custom/alternate pieces are coming for Suturvora though - there's always the chance I might be dropping everything to paint another 4 Warlords for Suturvora, so... you know... yeah...

Anyhow, enough forward-looking statements, on to what I've actually completed, in order of progression:

I.  Stratagems for Adeptus Titanicus

So there's three stratagems from the Doom of Molech supplement that I like but which don't have tokens or markers (yet...).  Arguably Strafing Run could count as a fourth, but between old Epic/Forgeworld and new Aeronautica Imperialis models, it shouldn't be hard to get a pair of Thunderbolts.  So I dug into my forumware stash and pulled out a bunch of MkIII heavy weapons and some MkIV recon legionnaires to cover the Titan Hunter Infantry and Forward Observers Stratagems respectively.  As for the last, Scatterable Mines, I threw that one together using some styrene dowel.  I mean, 8mm scale anti-vehicle mines are pretty much hockey pucks at that scale anyway. 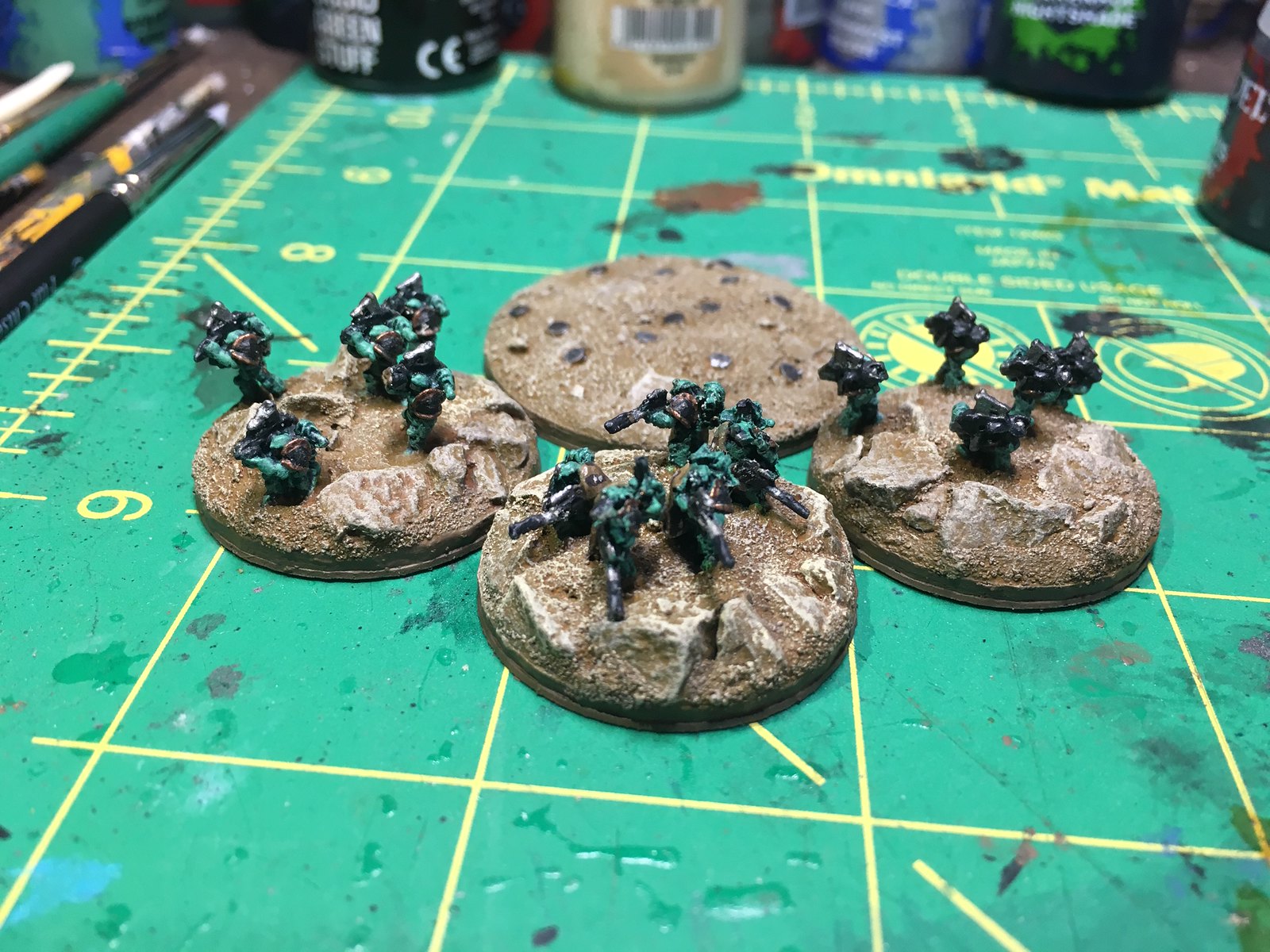 Since these are basically tokens meant to represent effects moreso than actual gaming pieces, I opted to mount the infantry on 30mm bases like the other Battlefield Assets, and tried to make these look more like mini dioramas rather than just infantry bases.  So yeah, XVIth Legion forces in support of Legio Tempestus, moving through rough terrain to direct fire onto or ambush oncoming Titans :) 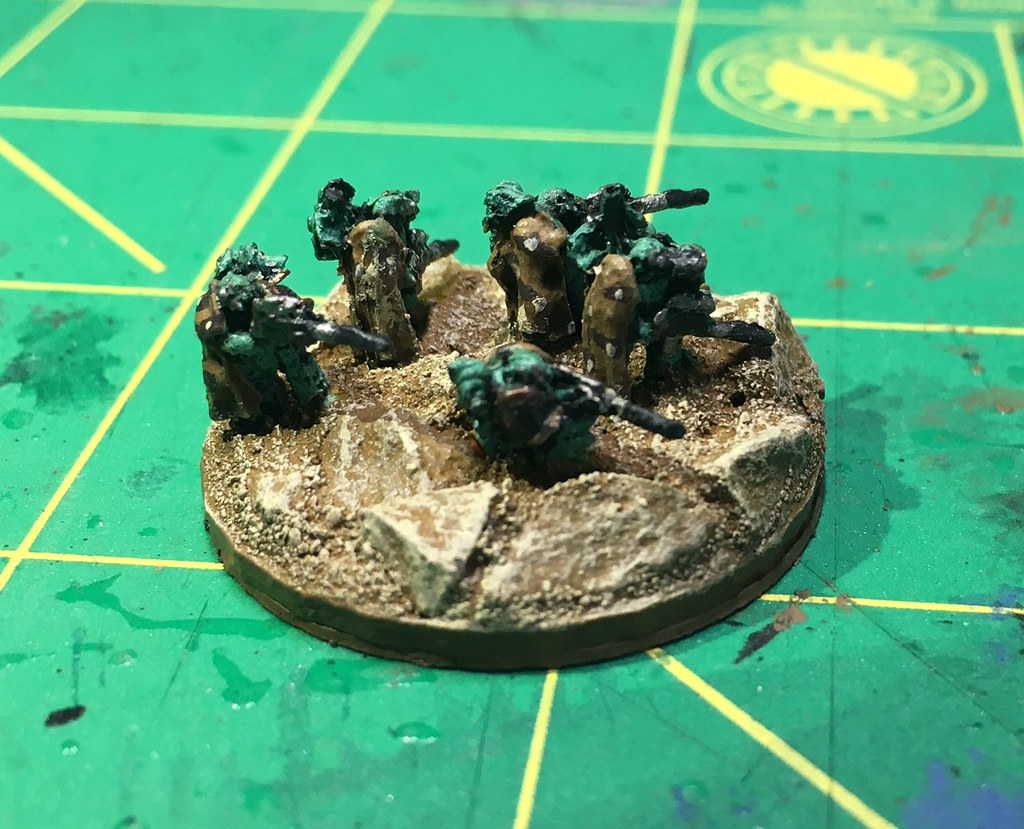 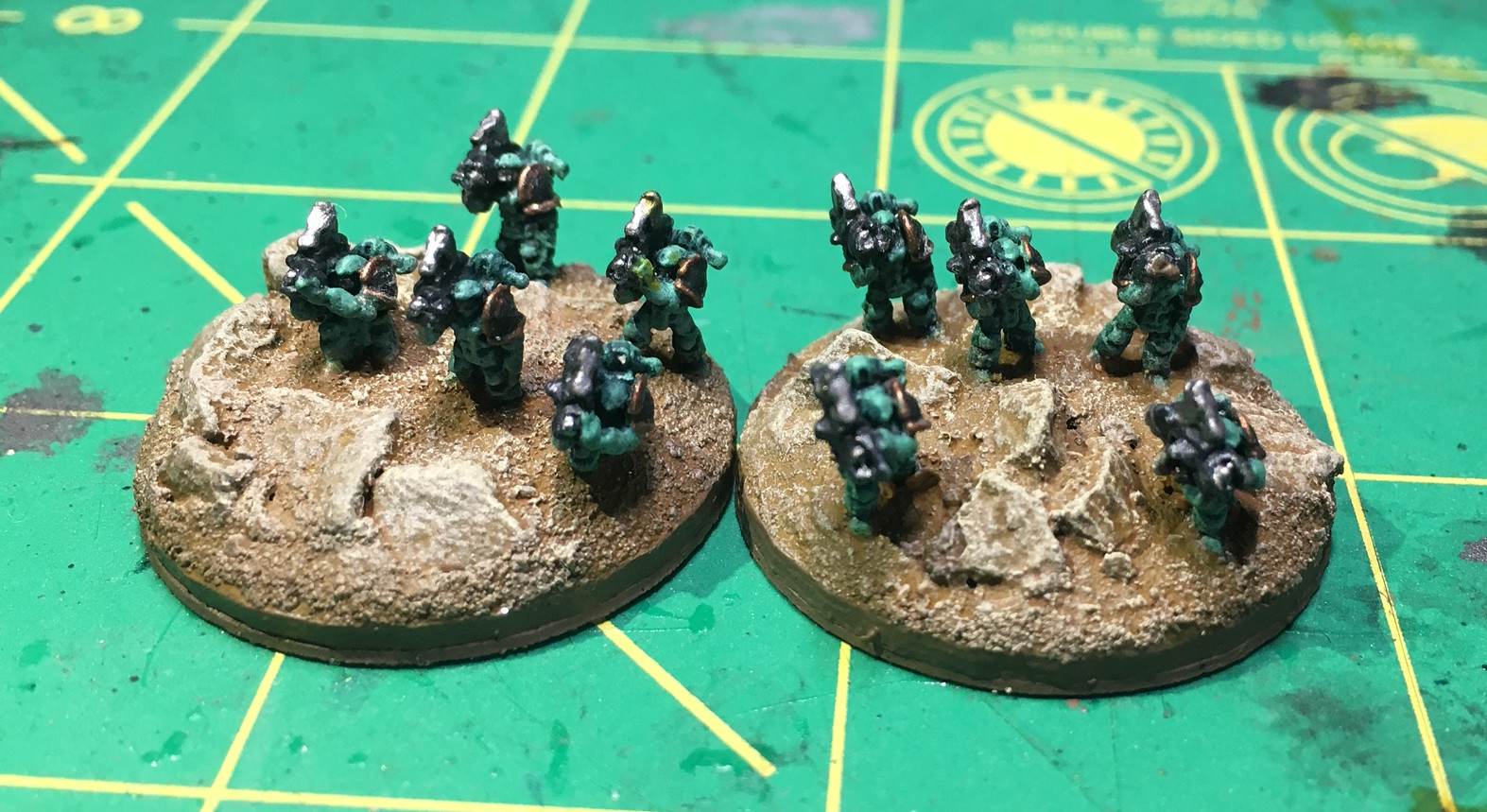 As for the Scatterable Mines marker, I opted to go slightly larger on this one as you (arguably) measure from the center on this one (conveniently, there's a mine right in the middle of the base), so it made more sense to use more space to better represent the template.  Once I dullcote these guys I'll add some static grass, but this is good enough for now.

So in the past week I've painted up a carapace vulcan megabolter for my Reavers, an arioch power claw for my Warlord(s), and a pair of ersatz eBay 3D printed carapace gatling blasters to tide me over until GW finally releases the official ones.  Technically I completed the vulcan last Friday (earliest of everything in this recounting), but I figured it's worth grouping things as they were finished, roughly. 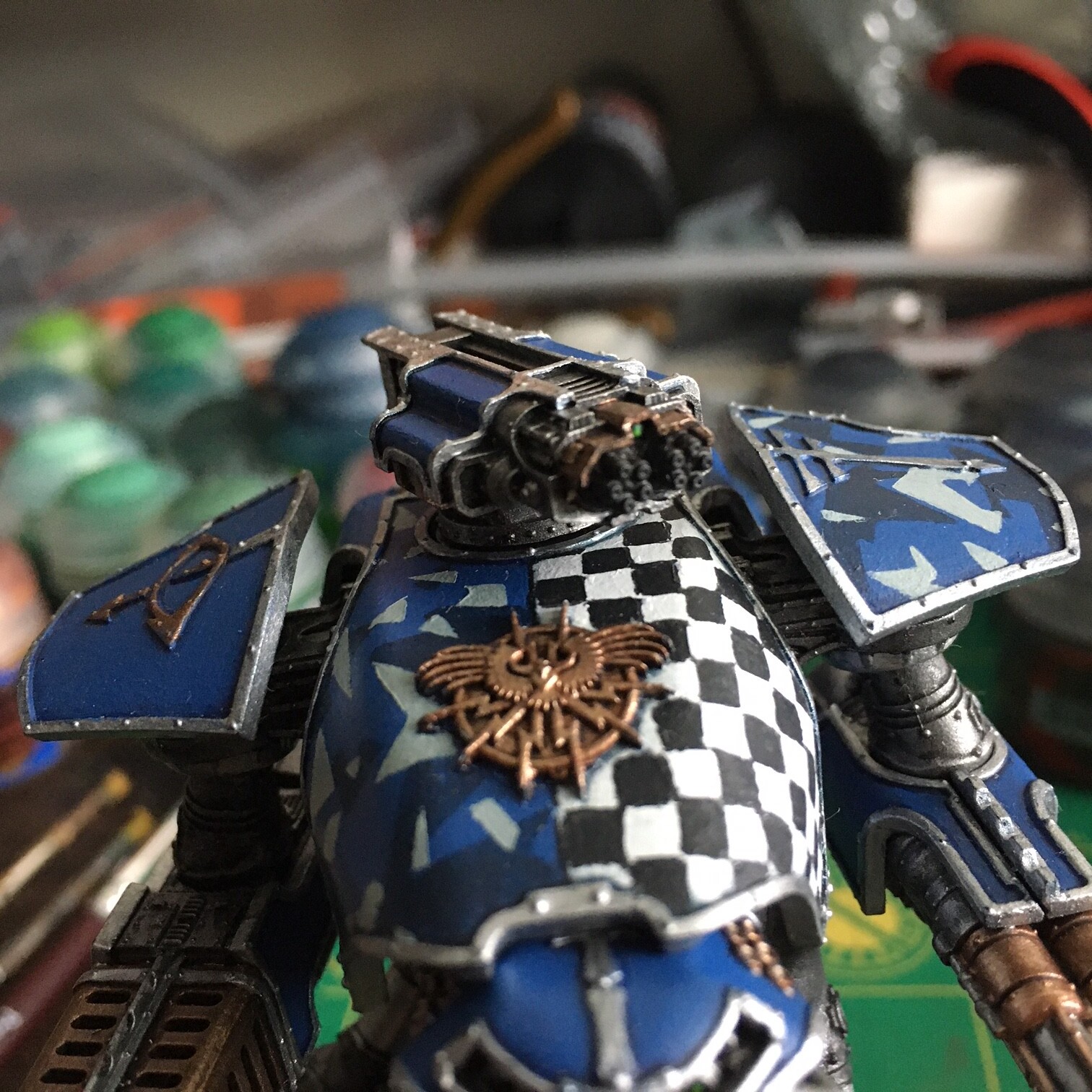 This one will really come into its own when I get one of my CQB Reavers going.  Pair it with a laser blaster and a power fist for all kinds of close-in loving ;) 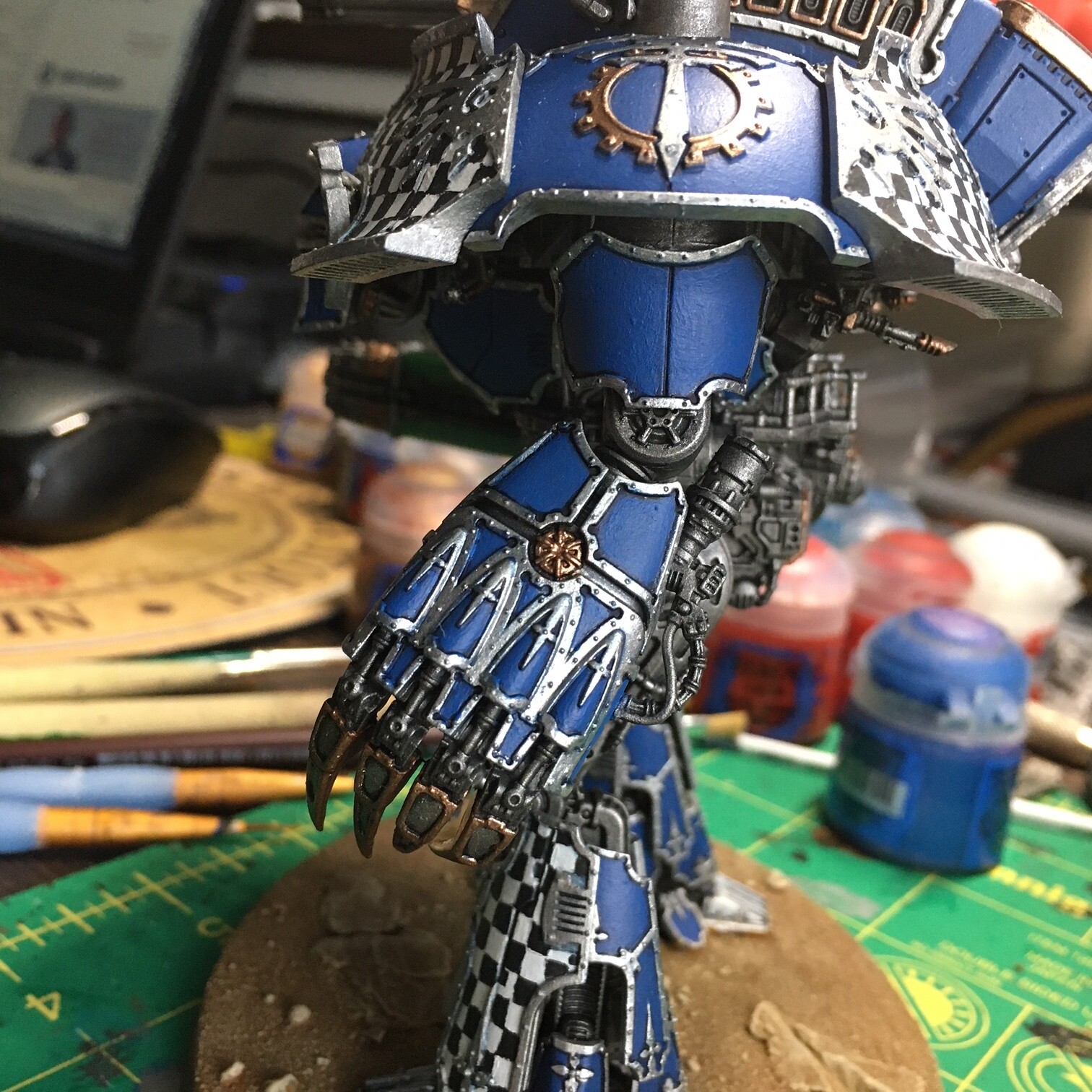 In truth, this is unlikely to ever see play short of an extremely permissive scenario, but hey, I can say I've painted absolutely everything I'd primed for my first Warlord.  If nothing else, it's great Knight deterrent ;) 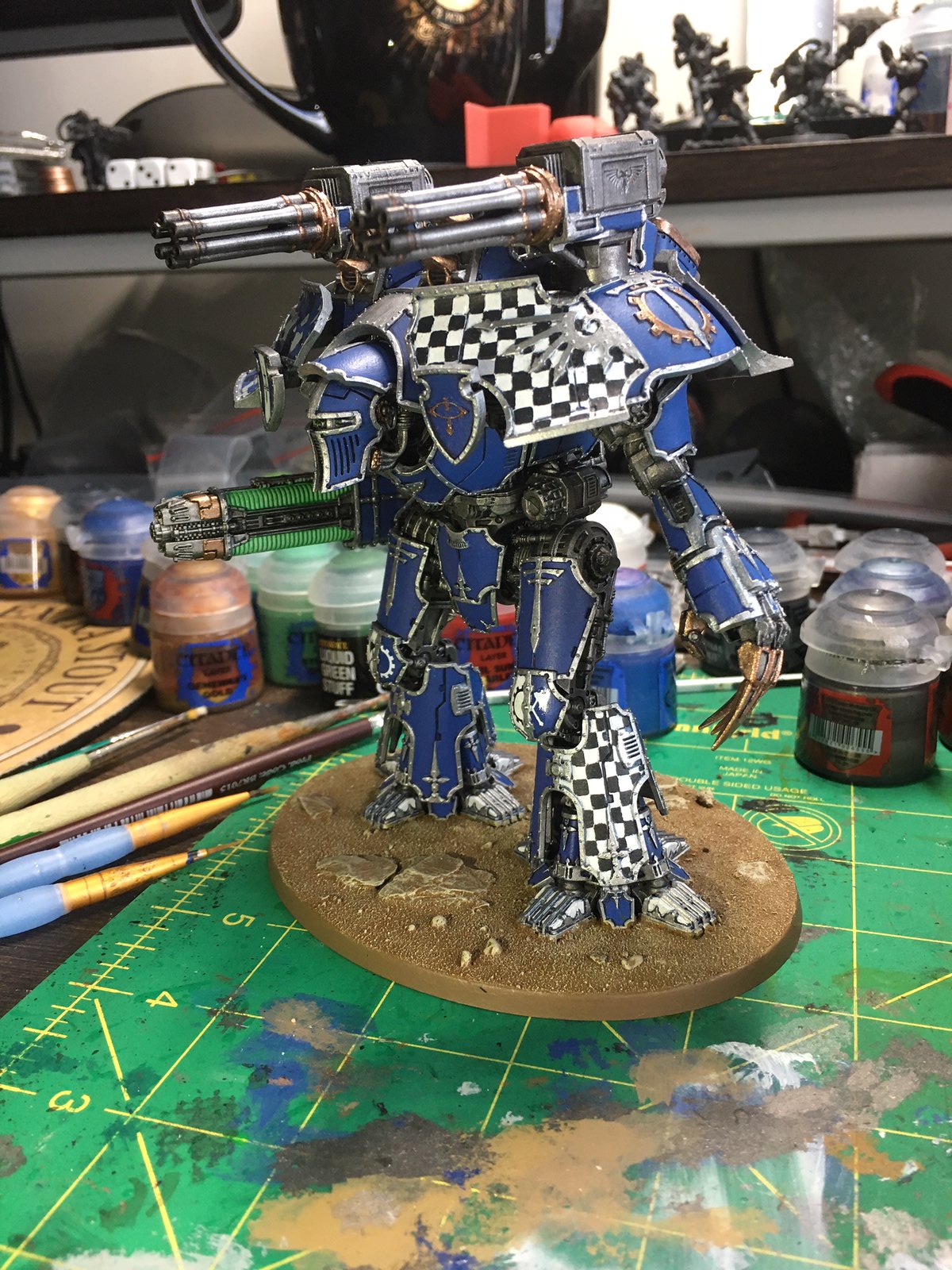 Aaand gatling blasters.  Man these didn't print all that amazingly.  The mounting rings were too small and required surgery to be able to fit the Warlord, and the guns are really badly overbalanced forward.  But hey, I now have every weapon option I might actually want to use available (more later on why I'm never putting vulcans on a Warlord), so tick that box ;)

I haven't forgotten my 6mm models either.  I fixed a whole bunch of nicks and scratches on my Suturvora engines earlier this week, and I finally put some paint on my carapace landing pad stand-in.  I decided I wanted to put together an armored sensor pod for my Reavers, using pieces of a spare cannon and comms asset from AT18 as well as a few antennae.  The whole idea is that everything's deployed for uplinking and gathering telemetry data / serving as an AWACS engine for the maniple, and can all be retracted into the armored dome if the titan comes under fire. 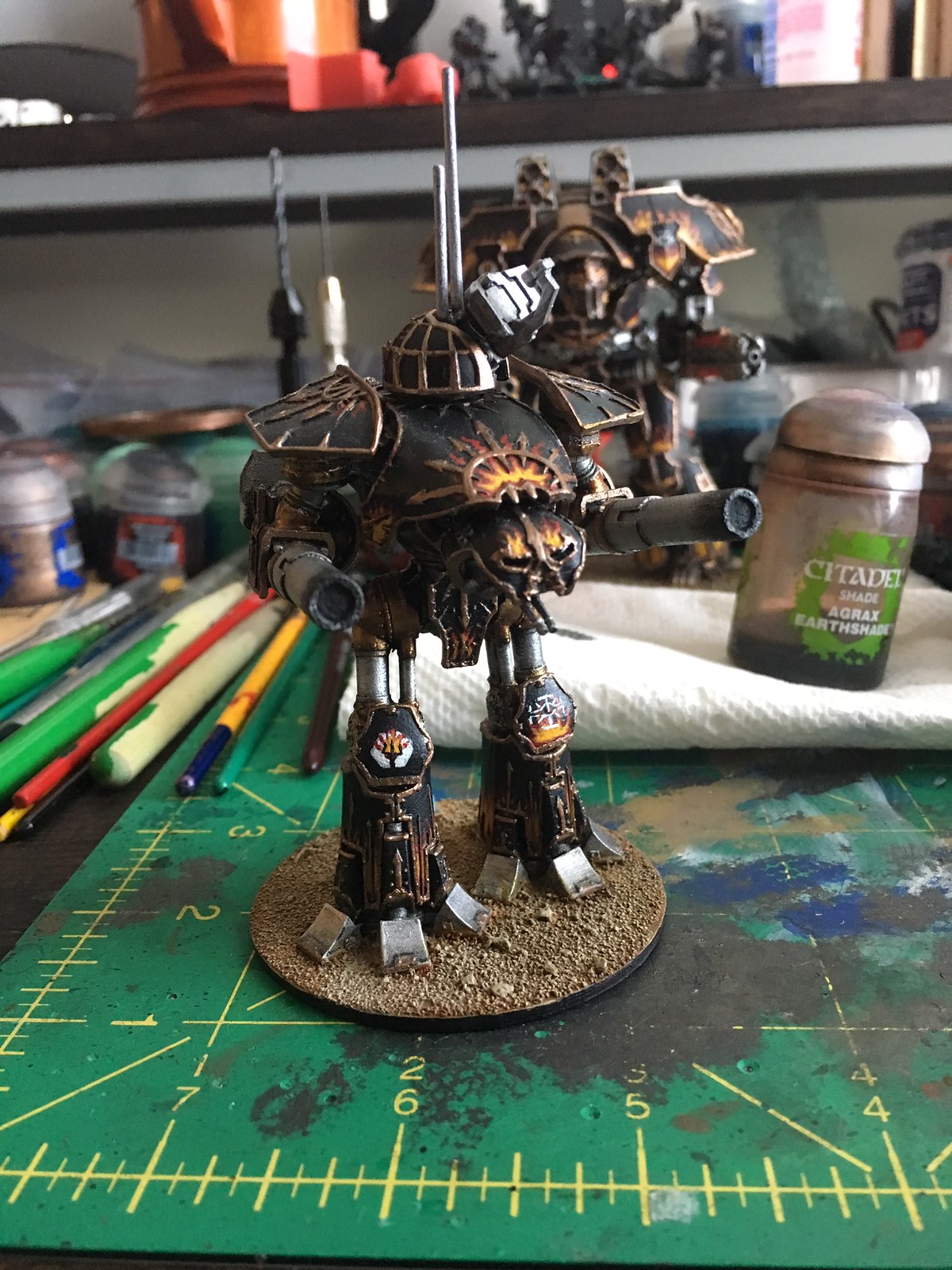 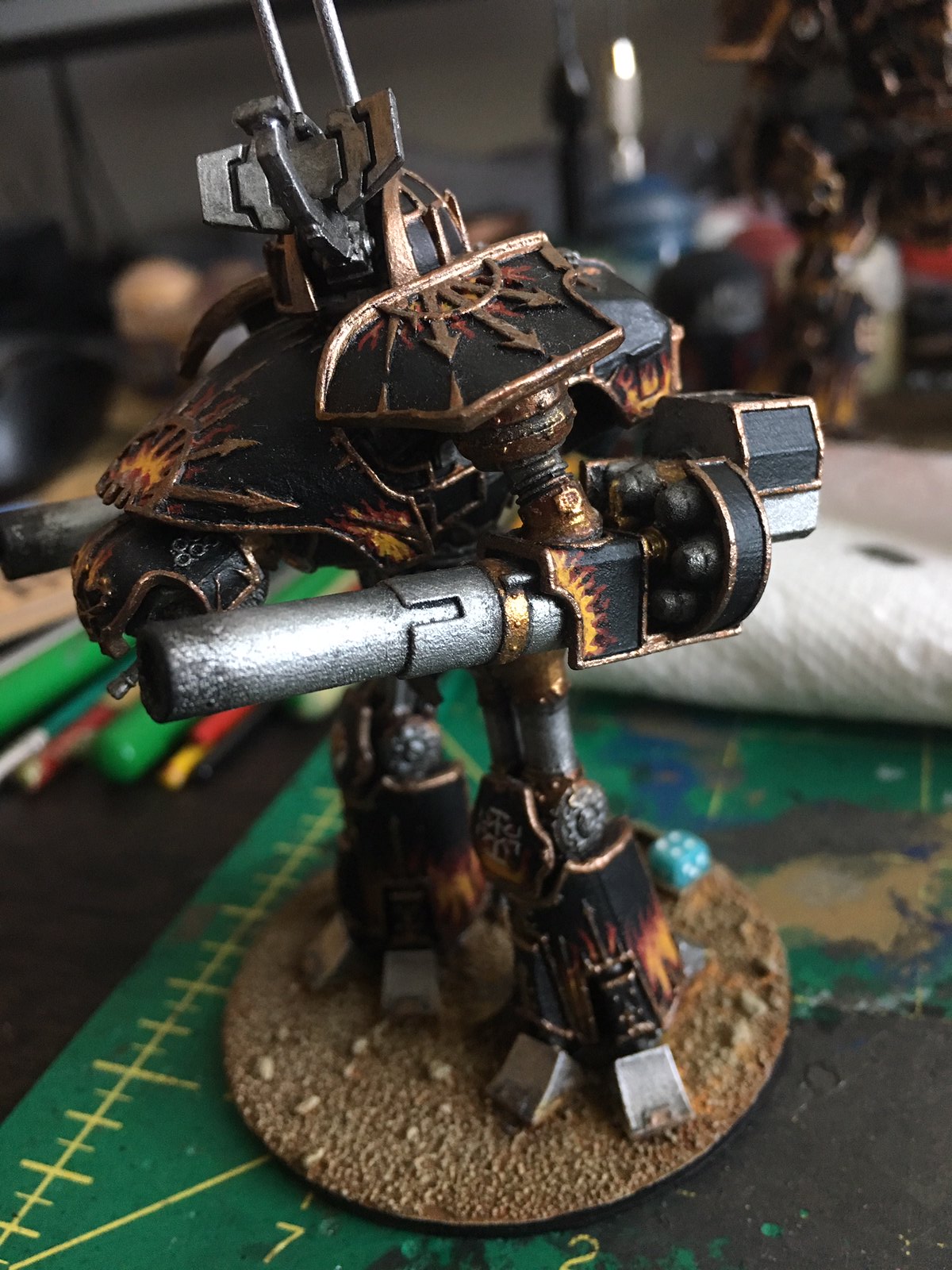 And with this, I now have just about everything I might want to use for my Suturvora force as well now ;)

Finally, I'd painted up 8 more dreadnoughts ahead of NEAT this summer... which then lay fallow as I searched for appropriate basing sand when I ran out.  Well, I finally finished these guys off, although there was a resin casualty along the way.

This brings me up to 17 Dreadnoughts, 1 Supreme Commander Dreadnought, and 4 Siege Dreadnoughts for my Iron Warriors.  Now the real challenge will be building a 3,000 point list where I can field them all ;)
30K 40K Adeptus Titanicus AMTL AT18 Chaos E:A Epic Epic: Armageddon Heresy Horus Heresy Iron Warriors Ongoing Projects Restarted Suturvora Tempestus Terrain Titan Titanicus