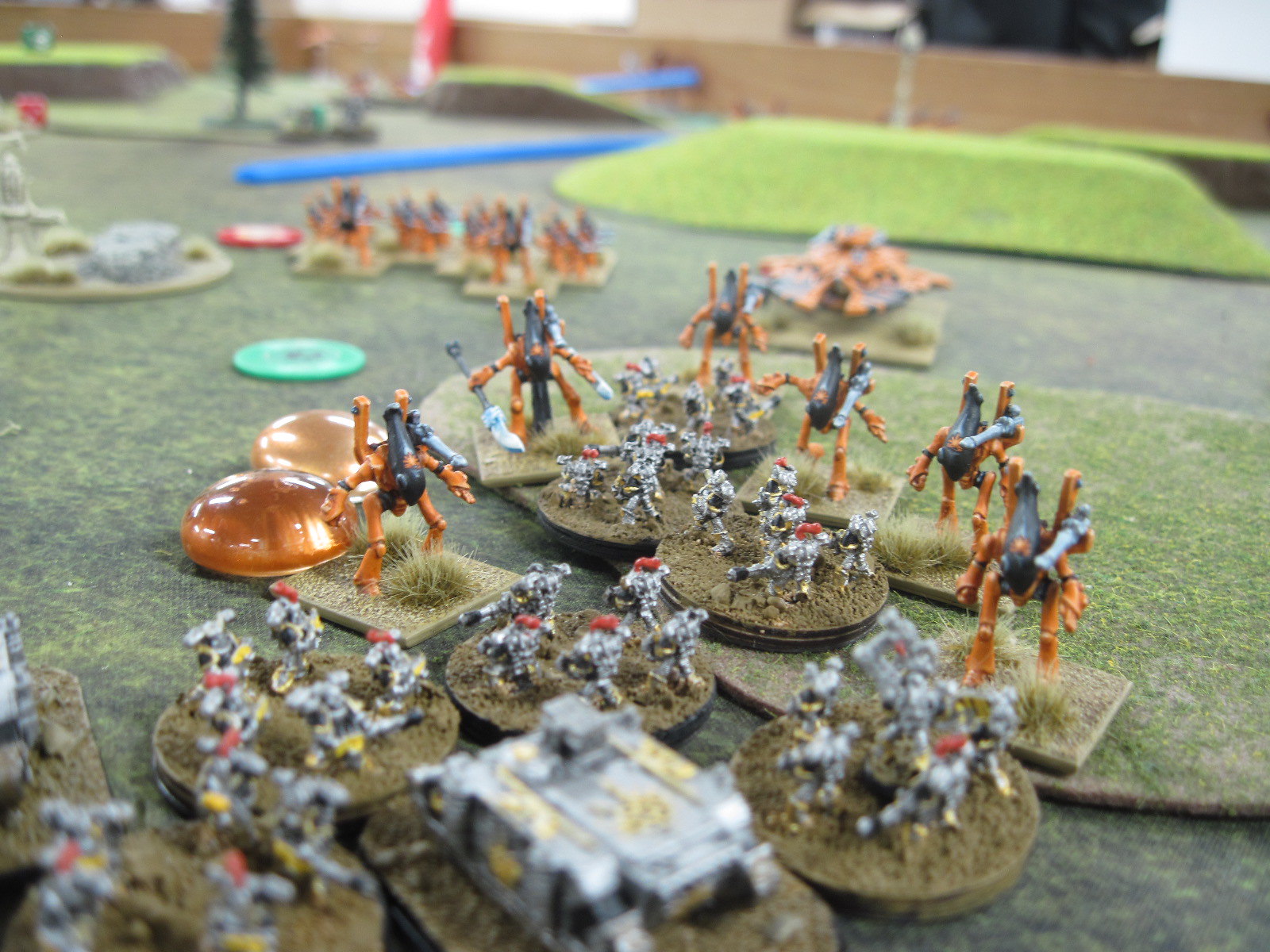 Yeah, I'm publishing this on 6/24, but I got back from NEAT XII last week and work got crazy busy, so a week-ish late, but here's another battle report for the Iron Warriors' road to approval.

I really wish I could say this one went better, but having never played Iyanden before, and having not played Dave's Eldar in at least a year or two... there was a lot I wasn't prepared for.  My fault really for not paying attention to other games or asking the right kinds of questions / listening to the right advice before playing.

Long story short - I played a new enemy and played defensively, which more or less set me up for defeat in detail.  Hard lesson, and well-learned, but not as painful as giving my Blitz away in Game One of NEAT XII on Saturday.  More on that later!

Iron Warriors started arrayed around the blitz, armor and infantry positioned to protect the artillery.  I set my cruiser to come in Turn 2, and held my Dreadnoughts in reserve with it.  That was a mistake; the Cruiser should have come on early in Turn 1 and I should have dropped immediately to wreck as much as I could before the Eldar got rolling.  Eldar spread out their Night Spinners on the wings, with the Falcons spread across their deployment zone, the Storm Serpent hidden behind a hill. 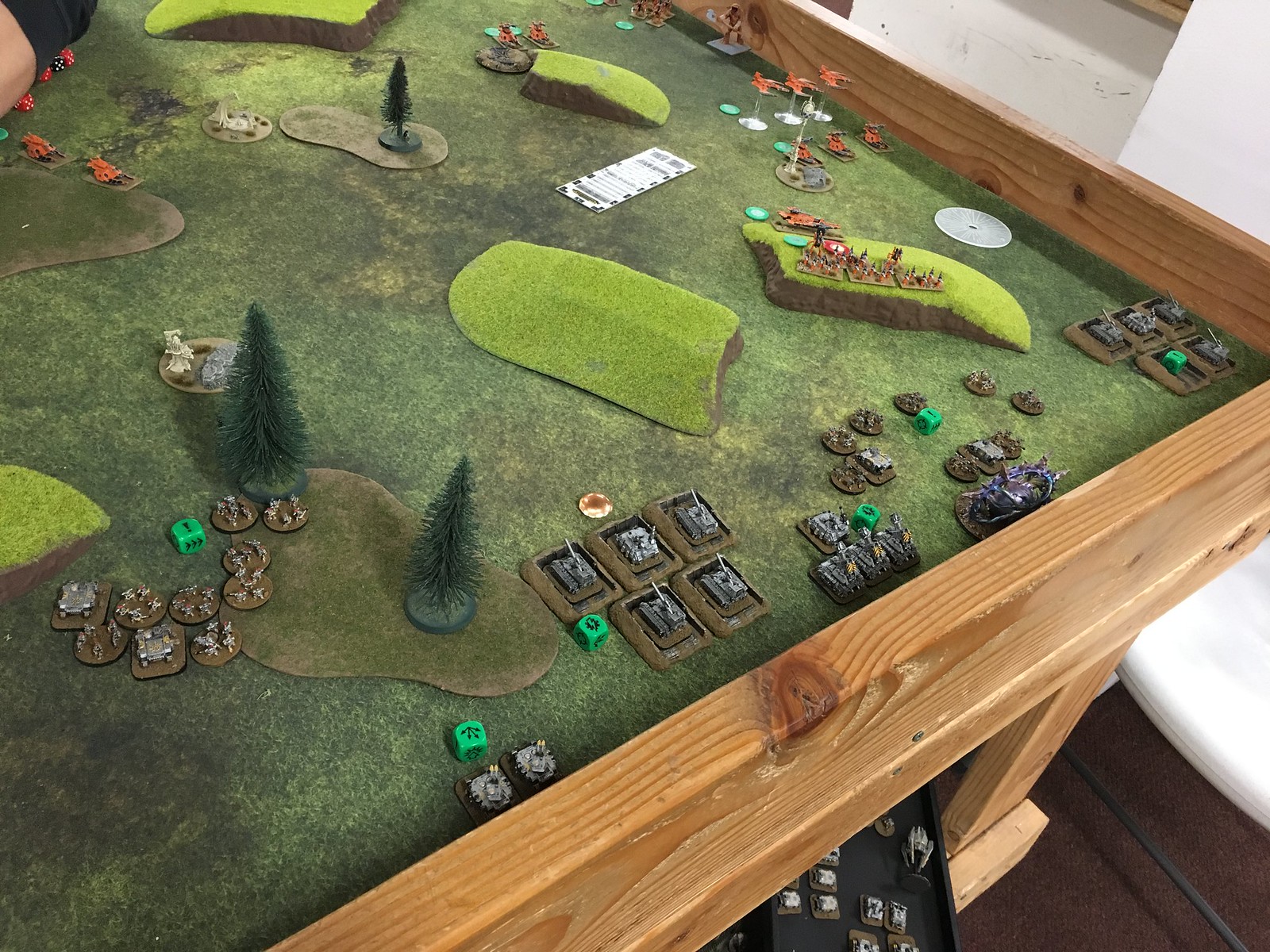 The Eldar responded by activating their second Falcons formation, doubling up and killing 4 tanks and breaking the Chaos armored company.  The shot up CSM infantry company marshalled, firing on the Wraithguard ineffectually but removing all blast markers.  The third Eldar Falcons formation doubled up and shot up the left flank CSM infantry company, killing 2 Rhinos and a Stalker again.  That formation then marshalled, clearing blast markers and regrouping to regain coherency.  Finally, the Eldar deployed another Wraithguard formation out of the midfield Wraithgate, doubling up to fire on the left flank Basilisks, inflicting a blast marker.

At the end of the turn, the broken CSM armored company rallied, the left flank Basilisk formation cleared a blast marker, and the Eldar Night Spinners rallied.

The Eldar summoned their Avatar next to the most forward Wraithguard formation.  The Iron Warriors won the initative.

The IW Cruiser came through low orbit, firing on and missing the Storm Serpent, while the preplotted barrage landed in an open field.  One Dreadnought formation came down on the Eldar Blitz, and the other on my T&H objectives.  The T&H Dreadnoughts Engaged the nearby Wraithguard formation, losing two dreadnoughts and breaking in the assault.  In response, the Eldar Avatar charged the right flank CSM infantry company, inflicting several casualties and wiping out the rest through hack-downs.  The midfield Eldar Wraithguard formation retained, advancing on the left flank CSM infantry company and killing one.  The Iron Warriors responded with two activations, the right flank Basilisk battery killing two of the nearby Wraithguard, and the Demonic Artillery killing one midfield Falcon.  In response, the Storm Serpent doubled and fired on the left flank Basilisks, inflicting a blast marker.  Then the forward Wraithguard formation  engaged the left flank CSM infantry company, wiping them out and claiming BTS.  Finally, an Eldar Falcon formation took the double retain to advance back and fire on the Blitz-occupying Dreadnoughts, killing one.

The remaining left flank Basilisks desperately attempted to fire on the nearby Wraithguard, accomplishing nothing.  The second Falcon formation failed its activation.  The Iron Warriors Dreadnought formation on the Eldar Blitz advanced and took the nearby Falcons under fire, killing one.  Then the third Falcons formation marshalled and cleared their blast markers.  The Eldar then ran through their final three activations, the squadron of two Night Spinners firing on the CSM armored company to break them, the full squadron of Night Spinners firing on the left flank Basilisks, killing one more, and the Phoenix Bombers coming around for another pass, killing another Blitz Dreadnought and breaking them. 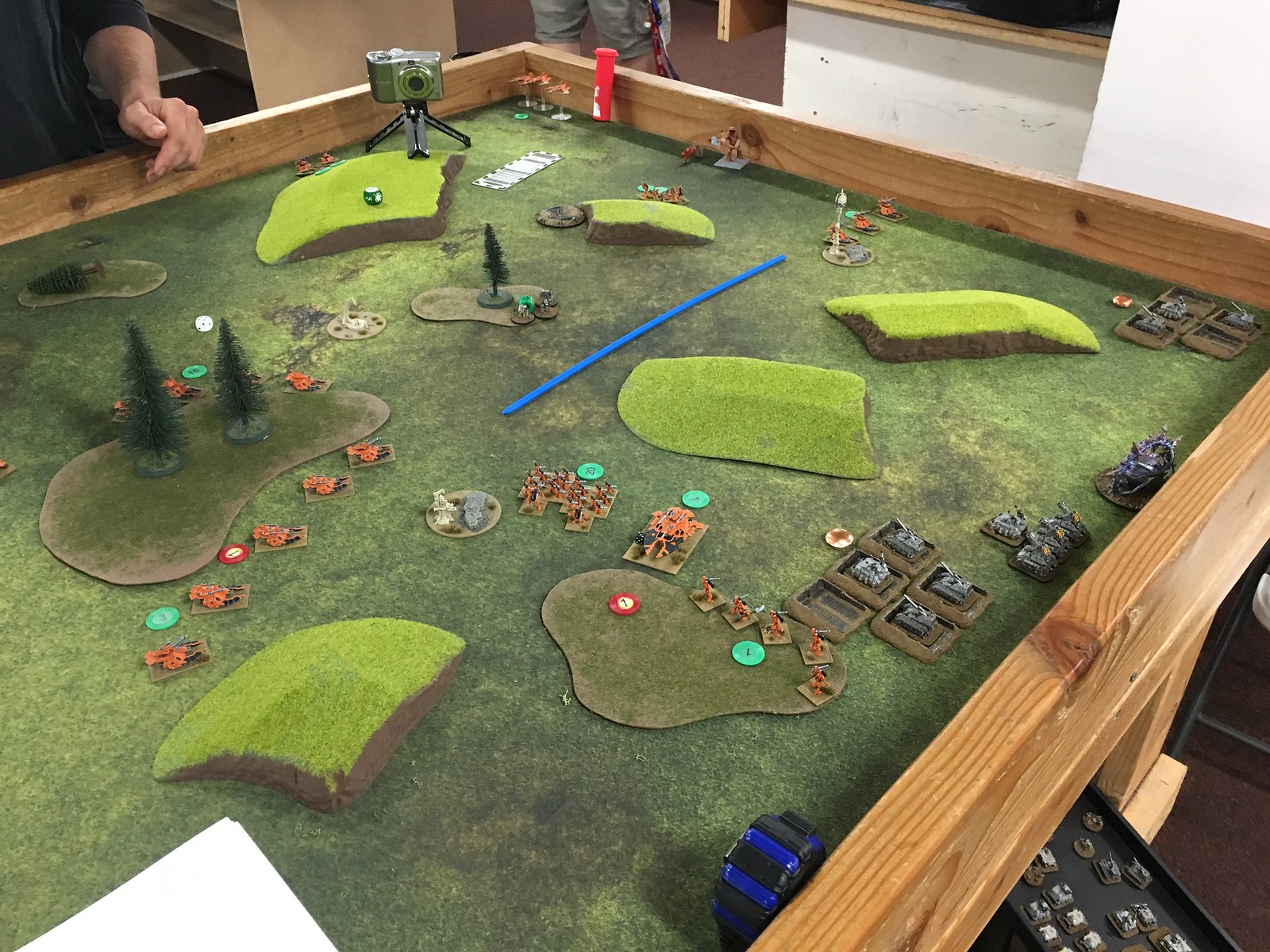 At the end of the turn, the Blitz Dreadnoughts rallied, as did the Chaos armored company, and the right flank Basilisks.  The remaining Basilisks on the left flank shed two blast markers, and the midfield Dreadnoughts stayed broken.

The Iron Warriors won the initative.

The left flank Basilisks sustained fire on the Wraithguard staring down at them, but to no effect.  In a desperate attempt to kill something, the Demonic Artillery followed suit, also merely scuffing the wraithbone.  In response, the Eldar Phoenix Bombers came back for another pass on the Blitz-occupying Dreadnoughts, killing 2 and breaking them.  The full Night Spinner battery also sustained fire on the right flank Basilisks, inflicting another blast marker.  What was left of the right flank Basilisk battery spitefully returned fire, inflicting no casualties, which turned out to be my last unbroken activation.

One Falcon squadron advanced on the remaining Chaos armored company, killing the last two Predators and eliminating them outright.  The second Falcon formation Marched and stretched out to claim objectives.  The third Falcon formation settled on the Eldar Blitz, eliminating the last two Dreadnoughts and locking down the Eldar objectives.  The left flank Wraithguard formation assaulted the left flank Basilisks, wiping them out. 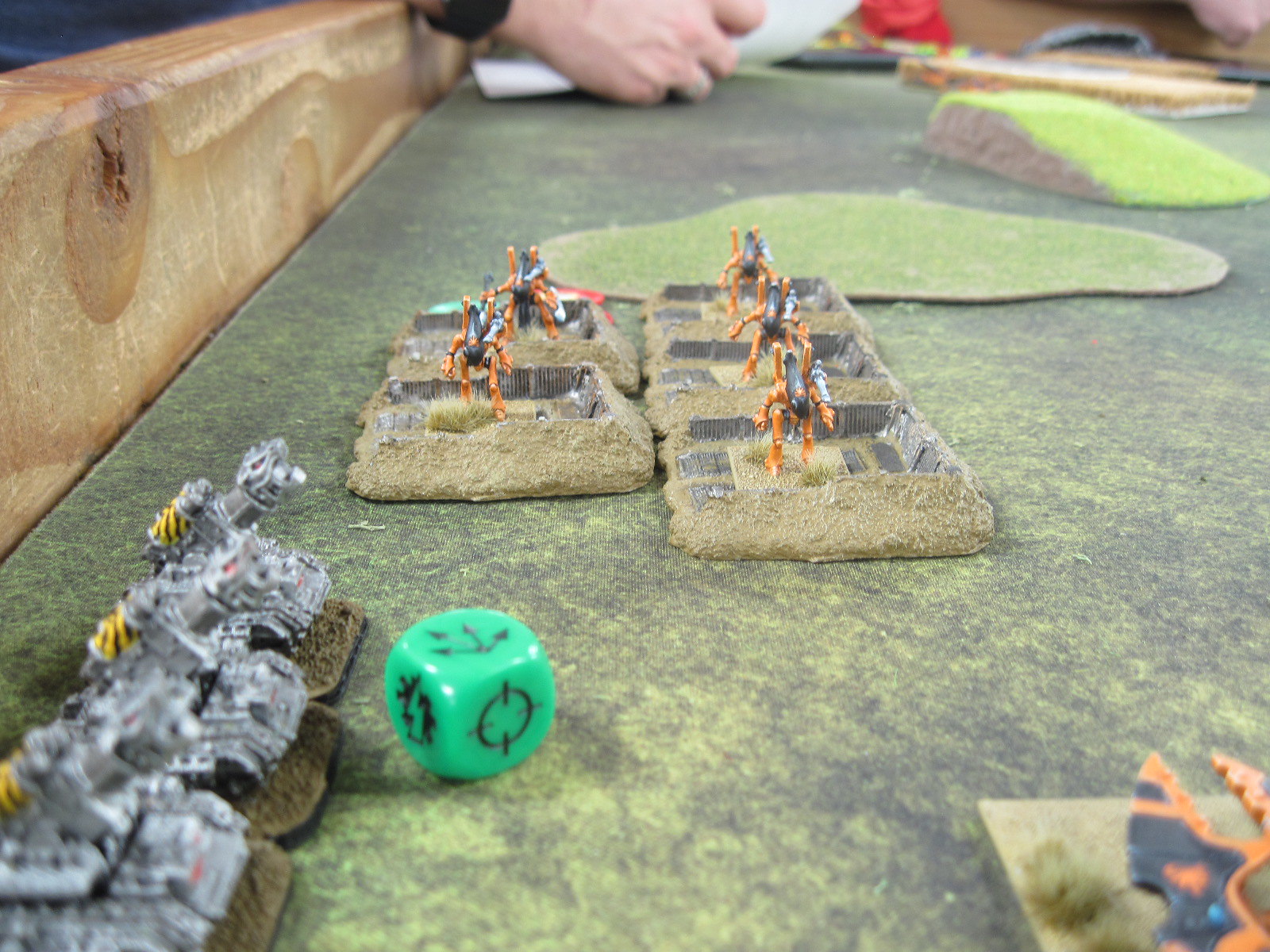 The storm Serpent fired on the Demonic Artillery, killing one and breaking them.  The midfield Wraithguard formation turned back on the broken midfield Chaos Dreadnoughts, killing one and holding the last set of objectives.

At the end of the turn, the broken midfield Dreadnoughts failed to rally and contest those objectives.

At the end of the game, Iyanden held my Blitz, killed my BTS, held DTF & TSNP, winning 4-0.

That hurt.  As mentioned above, I basically lost the game in pregame planning.  I was prepared to get Wraithguard in the face, I just didn't realize how hard it was going to hurt.  Dropping Dreadnoughts on Turn One and plotting my cruiser barrage differently might have netted me a Falcon formation and maybe the Storm Serpent.  If that had been the case, I would have been able to slow the tide of Wraithguard formations and maybe fended them off for a few turns.  As it was, Dave had full command of the board to run around and shoot things to death as he saw fit, which wasn't helped by my abysmal saves.  Honestly, if I'd known what to expect and been planning to fight Iyanden, I'd have dropped the Demonic Artillery for a Decimator or two to pour fire into the Wraithuard with and played a much more aggressive Dreadnought drop on Turn One.  Something for next time.
Battle Report Chaos E:A Eldar Epic Epic: Armageddon Iron Warriors Iyanden